Wonkblog asks various economic experts to post their chart of the year and to briefly explain what it means. Economist Glenn Hubbard, the former adviser to George W. Bush and current adviser to Mitt Romney, offers this: 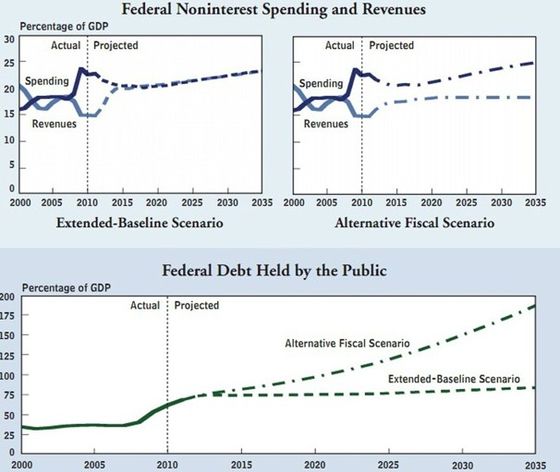 “The graph shows that the deficit problem is real; it is principally a spending problem; and attempts to correct it by raising taxes would require astronomical tax increases.”

That’s weird. Hubbard says that “attempts to correct it by raising taxes would require astronomical tax increases.” But it doesn’t show that at all. First of all, Hubbard only seems to want to argue against the policy of closing the deficit entirely through tax increases, when in fact the Democratic position is to close the deficit through a mix of higher taxes and lower spending.

Second, even if we did reduce the deficit entirely through higher revenue, would it be “astronomical”? Well, no. We could do that and still rank as one of the lowest tax countries in the advanced world. As Michael Ettlinger and Michael Linden point out, we could raise our revenue to Canadian levels – and Canada sits in the bottom third of tax levels of OECD countries – and balance the budget easily.

Now, Hubbard obviously doesn’t want to do that because he likes small government. But his argument that we can’t do it, or that doing it entirely through higher revenue would be “astronomical,” is obviously false.

THE FEED
17 mins ago
life after roe
life after roe
Outrage, Uncertainty, and Instant Abortion Bans After Roe v. Wade Overturned
By Intelligencer Staff
Some Republican leaders are already calling for a nationwide ban, while protestors assemble outside the Supreme Court to express their outrage.
10:44 a.m.