John Paul Thornton of Decatur, Alabama, has gone ahead and signed up to start the Occupy Wall Street Political Action Committee, because why not? The amorphous protest movement has a potential candidate for Congress and will now legally have the means to back him and other like-minded politicians with huge sums of money, if they can get their donations back up or find a sugar daddy. With regards to the super PAC’s establishment conformity, Thornton tells the Atlantic Wire, “It does seem counterintuitive. I am out to get the bloated amounts of money out of politics but to do that, we need to support candidates looking to do that.” But he did spice up the application some.

In the space asking for his position within the organization, Thornton filled in “chief principal minister,” and used “keeper of records” elsewhere; a lawyer says he’ll probably have to tone that down. As a final flourish, Thornton showed some solidarity with his brothers and sisters: 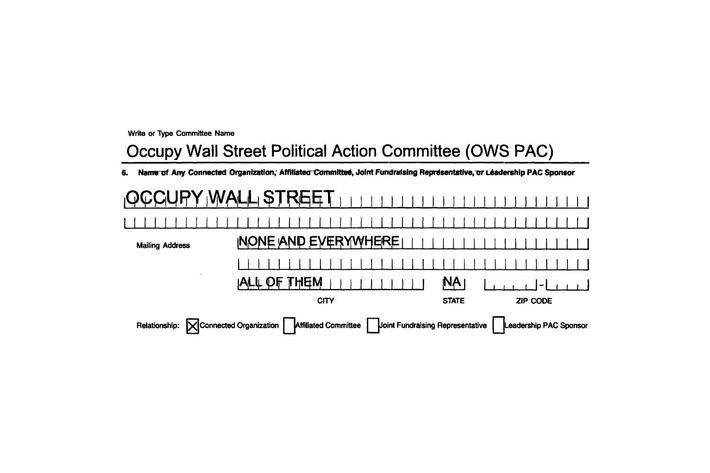 After complaints from President Trump that he can’t wash his “beautiful hair properly” due to “drip, drip, drip” shower heads, the Trump administration is *formally* moving to roll back shower head regulations set in 1992 by Pres. George HW Bush.https://t.co/HbXpOpQf5O
—@SteveKopack
12:48 p.m.
ghislaine maxwell
ghislaine maxwell
Ghislaine Maxwell Complains About Conditions in Brooklyn Jail
By Benjamin Hart
Following the suicide of Jeffrey Epstein, guards are apparently not taking any chances with his alleged fixer.
12:30 p.m.
coronavirus stimulus
coronavirus stimulus
Will We Get a Second Round of COVID-19 Stimulus Checks?
By Ed Kilgore
Dems called for another round of $1,200 checks, and now the GOP is proposing something similar. But the timing is iffy and negotiations are complex.

NEW- Kanye West met with Jared Kushner last weekend in CO, as West continues with an effort he has indicated is aimed to harm Biden. https://t.co/DsVj58HrnS
—@maggieNYT
10:27 a.m.
police reform
police reform
The Window for Major Police Reform May Be Closing
By Zak Cheney-Rice
The superficial consensus in polls demonstrating that the public supports police reform hides deeper issues.
9:06 a.m.
intelligencer chats
intelligencer chats
What Kamala Harris Brings to the Ticket
By Jonathan Chait and Benjamin Hart
Her flawed campaign also showcased many of her strengths — like going on offense.
9:06 a.m.

Grim economic outlook for the U.K.

The U.K. recorded a steeper second-quarter contraction than its peers, a performance that means it suffered the worst economic hit from the coronavirus in Europe as well as reporting the highest death toll.

The economy is already recovering as restrictions on daily life ease and workers trickle back to factories and offices, recent data show, but Bank of England officials have warned that it could take until the end of 2021 to regain the ground lost during the pandemic.

U.K. gross domestic product shrank 20.4% in the second quarter, equivalent to an annualized rate of 59.8%, the country’s statistics agency said Wednesday. Over the same period, the U.S. and Germany lost around 10% of their output, with Italy losing 12%, France 14% and Spain 19%.

U.K. Economy Shrinks by More Than Any Other Rich Country
—WSJ
8:04 a.m.
vision 2020
vision 2020
Election Funding Is Being Held Hostage in Stimulus Standoff
By Ed Kilgore
We are drifting toward a general election that could crash state and local election systems, and it’s looking like Republicans are fine with that.
2:11 a.m.

TikTok Tracked User Data Using Tactic Banned by Google
—The Wall Street Journal
1:44 a.m.
vision 2020
vision 2020
Joe Biden Sees the Future in Kamala Harris
By Gabriel Debenedetti
He’s not just planning for the next three months, or even the next four years — but for what comes after.
12:34 a.m.
politics
politics
Ilhan Omar Wins Democratic Primary in Minnesota’s 5th District
By Matt Stieb
With Omar defeating a progressive challenger with support from pro-Israel groups, all four Squad members are expected to return to Congress in 2021.
8/11/2020
politics
politics
QAnon Booster Marjorie Greene Continues March Toward Congress
By Ed Kilgore
It’s hard to be too extreme in pockets of red America like Georgia’s 14th District, where Greene just won the Republican primary.
8/11/2020
crime
crime
What We Know About the Killing of Elijah McClain
By Claire Lampen
The 23-year-old died last year after police brutally detained him while he was walking home from a convenience store.
8/11/2020

Joe Biden told top advisers this morning who his VP pick is, per @jeffzeleny.
—@kaitlancollins