As the economic recovery picks up speed, Republicans have subtly altered their case. They increasingly emphasize that the economy is performing badly, as opposed to taking for granted that it’s awful and arguing about why. “Let’s not kid ourselves: this is the worst recovery ever from a serious recession, and history says the deeper the down, the sharper the up,” asserted Indiana Governor Mitch Daniels on CNN’s State of the Union. “It should have been a very vigorous one. Hasn’t been.” Conservative columnist  Michael Gerson likewise charges, “The country’s economy might be improving, but it remains pathetically weak. Unemployment has remained north of 8 percent for three years — the longest period since the Great Depression.”

Worst recovery ever? Worst recovery since the Great Depression? How bad has the economy actually been under Obama, and what standard should we be judging him against?

Daniels’s claim that this is the “worst recovery ever” is problematic. The recovery is still quite young. If we undergo a double-dip recession, Daniels’s description may be accurate. If growth accelerates, it will be a horrendous prediction of the sort he specialized in during his tenure as George W. Bush’s budget director. The only way to judge a recovery is in full, when it has run its course. By the way, the title of “worst recovery ever” would probably go to the one Daniels helped craft under Bush, which, measured peak-to-peak (meaning, not taking into account the crash in which it culminated) featured historically rock-bottom levels of income and job growth. I wouldn’t blame Bush’s policies for the anemic job growth that followed their enactment, but the record certainly complicates the still deeply embraced Republican notion that Clinton-era tax rates were holding back growth.

It’s certainly true, as Gerson says, that we face the deepest trough since the Great Depression. But that’s because … we suffered the biggest crash since the Depression. Depressions are really bad.

Of course, that doesn’t mean that Obama should be completely free from any standard. You have to set the baseline somewhere. The favorite Republican baseline is the prediction his economists made, shortly before he took office, that unemployment would top out at 8 percent. Mitt Romney has falsely described this as a “promise,” when in fact Obama’s economists confessed there was a wide range of possible economic outcomes. Possibly the most common Republican economic talking point since 2009 has been to juxtapose Obama’s January 2009 prediction against the subsequent results. Esteemed analyst Veronique de Rugy has published versions of this chart over and over: 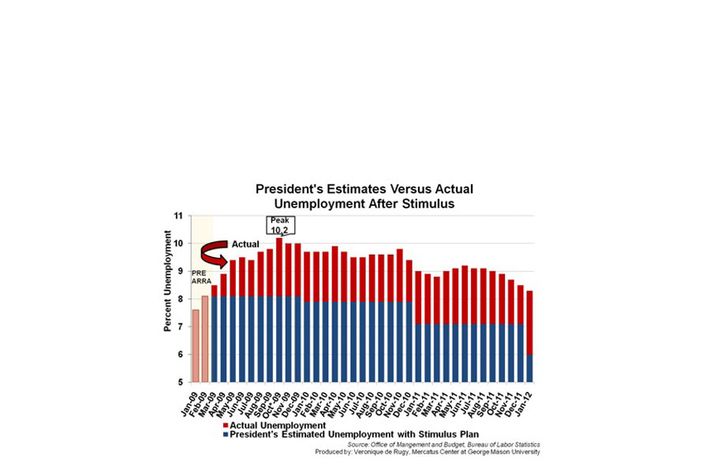 But of course this doesn’t show that the stimulus failed. The key giveaway is the bar on the left, which shows that unemployment had already exceeded their expectations by March 2009. It’s not a chart showing the stimulus failed. It’s a chart showing that the crisis was worse than we thought, and was already worse even before their response took shape.

So what is a fair standard of comparison? One key fact is that financial crises are worse than regular recessions, a conclusion embraced by Carmen Reinhart and Kenneth Rogoff and generally accepted by conservatives and liberals alike. And if you compare the current U.S. recession to other financial crises, as the Oregon Office of Economic Analysis has, then you get a very different picture: 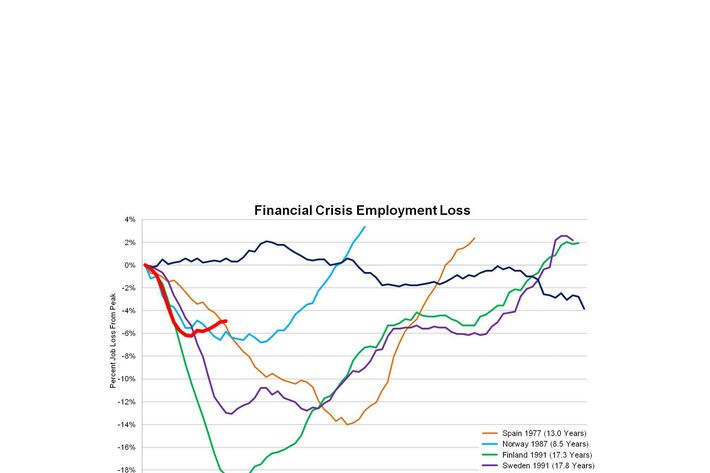 I think that comparison has flaws of its own. But surely it tells us something — it tells us that Obama’s boast that we avoided total disaster is not meaningless. The steps the administration and the Federal Reserve undertook in face of the recession — quantitative easing, some degree of fiscal stimulus, banking bailouts, reorganizing the auto industry rather than letting it collapse in the face of frozen credit markets — prevented the kinds of total disaster that are the norm in the face of this kind of crisis.

The steps Obama took were certainly not optimal — they were, indeed, largely shaped by a handful of centrist senators who didn’t understand the economic theory undergirding it. But it’s surely no coincidence that economists overwhelmingly believe the stimulus was worth the cost. When you combine the very strong economic consensus in favor of the stimulus with the inability of opponents to come up with a plausible baseline expectation that the economy failed to meet, then the notion that the recovery has been unusually anemic is pretty hard to sustain.

Of course, this has been true all along. And all along the response has been, essentially, so what? It didn’t feel true to voters, who were suffering and not prone to accept the argument that things could be worse, however valid the argument may be.

But it’s now easy to imagine that, by November, the economy will feel like a recovery. And then the administration will have the better of the technical economic argument as well as the visceral sense that voters have. That’s why you’re starting to see Republicans make some increasingly desperate arguments.

THE FEED
10:00 a.m.
elections of 2021
elections of 2021
Republicans Now Eager to Spin the Election in Virginia
By Ed Kilgore
After the California recall didn’t go so well for Republicans, their focus is on wealthy Virginia gubernatorial candidate Glenn Youngkin.
9:00 a.m.
pandemic
pandemic
‘I Did Not Want My Children to Be Home Again’
By Nia Prater
After more than a year of Zoom school, NYC kids returned to classrooms, much to the relief of parents and teachers.
9/17/2021
crime
crime
Robert Durst Found Guilty of Murdering Friend
By Chas Danner
The real-estate heir was convicted of first-degree murder for killing Susan Berman in 2000 in an attempt to conceal how he had murdered his wife.