George Packer has a wonderful little essay on the immiseration, and growing Republican leanings, of the white working class. But before proceeding with any discussion of his analysis, we have to address political scientist John Sides, who interrupts to insist, “The white working class has not, as a whole, become more Republican.”

Sides presents this chart, from Larry Bartels, which he says shows “only the merest hint of a secular trend in the voting behavior of whites without college degrees”: 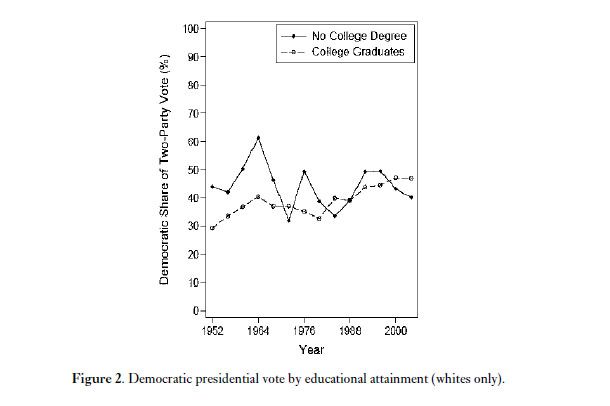 I’m a fan of both Sides and Bartels, but I don’t think this chart really shows what they say it does. The first problem, as Ruy Teixeira and Alan Abramowitz have noted, is that it begins during the Eisenhower era, when white working-class support for the Democrats was unusually low owing to Ike’s spectacular popularity:

Democrats averaged 55 percent support in the five New Deal elections from 1932 to 1948 and then an identical 55 percent in the 1960-64 elections which closed the era. That compares with an average of only 43 percent in the 1952-56 elections. Thus, starting with the Eisenhower elections sets up one’s analysis (if the focus is the presidential vote) to see relatively little decline in Democratic support among working class whites.

It’s always hard to pinpoint a specific demographic trend when the electorate as a whole bounces up and down. Democrats are doing a lot worse with the white working class than they were in 1964, when the party won a huge blowout national election, but also better than they fared in 1972, when they lost a blowout election. But a trend is clearly discernible if you match up comparable elections. 1976 and 2000 were similar elections in that the Democrats eked out tiny popular-vote margins, but in the former they split the white working-class vote, and in the latter, they lost it by double digits. Bill Clinton split the white working-class vote in both his victories, while Barack Obama’s win came while losing that group by nearly twenty points.

I think it’s pretty clear that white voters without a college degree have been trending Republican.

Anyway, Packer’s take on white working-class decline is very solid. The touchstone for his piece is Charles Murray’s new book, Coming Apart, which has sparked an interesting and productive debate. The book, which argues that the white working class is falling behind because its social values have collapsed, made its first big splash on the national scene in a fawning column by David Brooks. David Frum proceeded to methodically shred Murray’s thesis. Ross Douthat, having conceded that Frum has pretty much destroyed Murray’s argument, nonetheless says that Murray’s description itself is useful:

“Coming Apart” offers a convincing account of how meritocracy has exacerbated the problems that Murray describes — encouraging the best and brightest to work and live and (especially) mate within the cocoons of what he calls the SuperZIPS, segregating Americans by intelligence to an unprecedented degree, and creating a self-reinforcing pattern in to those with much social capital, much more is given, while to those without, even what they have is taken away.

Murray has a talent for raising important questions on the way to arriving at invidious answers … Visit most towns or rural areas where factories are boarded up and all the economic life is confined to strip malls, and you have to acknowledge the force of Murray’s picture. Rampant drug use, high dropout rates, out-of-wedlock births, epidemic obesity, every other working-age person on disability — it’s true even though Charles Murray says it’s true.

What seems incontrovertible is that Murray’s proposed solution of eliminating government programs and encouraging rich people to lecture the working class more does not offer any remotely plausible solution. Douthat suggests that traditional values offer part of the solution, but that doesn’t offer a whole lot in terms of conservative public policy solutions. The last two Democratic presidents have proposed or enacted a series of small changes designed to promote work among the working class — expanded Earned Income Tax Credit, more money for community college and job training. That’s not a “values”-based solution, but there’s not much else government can do to get people to work hard and stay married.

+Comments Leave a Comment
Why Are Poor Whites Conservative? And Poor?

THE FEED
5:00 p.m.
politics
politics
Biden Is Becoming the Heir to Trump’s Border Racism
By Sarah Jones
Border Patrol agents whip Haitians with a helping hand from the president.
4:46 p.m.
explainer
explainer
The Havana Syndrome Mystery and How the U.S. Plans to Solve It
By Matt Stieb
State officials have complained about not being taken seriously, as a bill waits on Biden’s desk to secure funding for health-care for victims.
4:30 p.m.
rikers
rikers
What Its Like at Rikers, According to People Who Just Got Out
By Rebecca McCray
“They’re not feeding people, there’s no water, no showers, no phone calls.”

4:05 p.m.
politics
politics
NYC Passes Landmark Legislation to Help Food-Delivery Workers
By Nia Prater
The first-of-its-kind measure will establish minimum payments for workers, access to bathrooms, and more.
3:40 p.m.
twitter
twitter
World’s Most Negative Place Expands Tipping Policy
By Benjamin Hart
Twitter Tips is now available for everyone.
3:38 p.m.
build back better
build back better
Why Are There So Many Democrats to Joe Biden’s Right?
By Eric Levitz
Political necessity doesn’t explain moderate opposition to the $3.5 trillion Build Back Better Act.
3:12 p.m.
explainer
explainer
Trump’s Long Campaign to Steal the Presidency: A Timeline
By Ed Kilgore
The insurrection wasn’t a one-day event. It was the culmination of a multifaceted, yearslong plot — and it isn’t over.
2:00 p.m.
the national interest
the national interest
Trump Lawsuit Says He’s Too Addicted to Twitter to Make Rational Decisions
By Jonathan Chait
This is in a lawsuit to get Trump back on Twitter.
12:36 p.m.
immigration
immigration
Special Envoy to Haiti Quits Over Treatment of Migrants
By Benjamin Hart
Daniel Foote cited “inhumane” U.S. deportation policy as a reason for his departure.
11:23 a.m.
foreign interests
foreign interests
Why France Is So Angry at the U.S. Right Now
By Jonah Shepp
A huge shift in Washington’s strategic approach to China was bound to piss some people off.
9:20 a.m.
the national interest
the national interest
Tucker Carlson Blows Up Murdoch’s White Supremacy Denial on Air
By Jonathan Chait
So much for “White replacement theory? No, no.”
9:00 a.m.
covid-19
covid-19
Johnson & Johnson & Regret
By Benjamin Hart
A one-and-done vaccine was supposed to be the easy way out of COVID. Instead, it became a kind of purgatory.
7:00 a.m.
state of the nation
state of the nation
TMZ Is the Only Public Opinion Polling I Trust
By Eve Peyser
The site’s “Stars and Scars” survey has its finger on the pulse of America.
9/22/2021
booster shots
booster shots
FDA Approves Pfizer Boosters for Seniors and Those at High Risk
By Matt Stieb
Boosters will be made available for those over 65, health-care workers, teachers, and others who already received two doses of the Pfizer vaccine.
9/22/2021
republicans
republicans
Susan Collins Reminds Us She Is Hardly a Moderate
By Ed Kilgore
By hedging her bets on abortion and endorsing a return to power by Paul LePage, Collins makes it clear her independence goes only so far.
9/22/2021
the national interest
the national interest
What Jonathan Franzen and the Left Get Wrong About Free Speech
By Jonathan Chait
Wait for an emergency to break ranks with your allies, and eventually it will be too late.
9/22/2021
politics
politics
A 12th Person Has Died in NYC Jails This Year
By Nia Prater
Three detainees have died in two weeks, and all but one in 2021 were being held on Rikers Island.
9/22/2021
politics
politics
What Joe Biden Needs to Tell Warring Democrats
By Ed Kilgore
It’s time for Democrats in Congress stop posturing, drop their demands, and heed Biden’s call for party unity – or they’ll face a grim future.
9/22/2021
politics
politics
Two Disbarred Out-of-State Attorneys Might Blow Up the Texas Abortion Law
By Ed Kilgore
Taking advantage of Texas’s encouragement of private law suits with bonus money, the random challengers may have just triggered legal review of SB 8.
9/22/2021
immigration
immigration
U.S. Releasing Some Haitian Migrants Within Country
By Matt Stieb
Deportation flights began on Sunday, but not everyone is getting the same treatment.
9/22/2021
politics
politics
The Drama-Lover’s Guide to the New Trump Books
By Margaret Hartmann
Love gossip, but not enough to actually read the new batch of Trump books? Here are all the juicy, disturbing, and darkly amusing tidbits you missed.
9/22/2021
moderate democrats
moderate democrats
$3.5 Trillion Is Not a Lot of Money
By Eric Levitz
Joe Biden’s spending bill isn’t extreme, no matter what moderate Democrats say.
9/21/2021
jeffrey epstein
jeffrey epstein
Second Woman Alleges Leon Black Raped Her in Epstein’s Mansion in Legal Filing
By Matt Stieb
A Jane Doe claims she was sexually assaulted by the billionaire in Jeffrey Epstein’s massage room in 2002.
9/21/2021
the money game
the money game
NYC Crypto Conference Jolted By Rumor of Feds Serving Subpoena to Panelist
By Matt Stieb
A speaker might have been served before going onstage Monday at Mainnet, as the cryptosphere awaits regulation from SEC chair Gary Gensler.
9/21/2021
the national interest
the national interest
The Horrifying Legal Blueprint for Trump’s War on Democracy
By Jonathan Chait
The Eastman memo is a new high-water mark in Republican authoritarianism.