One notable thing about the health-care debate is that liberals have expressed a general sense of humility about the problem of containing health-care-cost inflation, while conservatives have expressed overwhelming certainty that the Affordable Care Act will fail. David Brooks provides another good example of this today:

I don’t care how many comparative effectiveness research studies are commissioned, there is no way centralized dirigistes can keep up with a complex, innovative system. There is no way government can adapt quickly to failure.

There is no way planners can know how many employers will drop coverage, how many doctors will refuse to see patients in expanded Medicaid, how to write uniform rules governing the state insurance exchanges, how many people will or won’t enter high-risk pools, how Congress will undermine any painful cuts the executive branch does make, how doctors will evade efforts to control their revenue, how doctor shortages will pop up, how spending is best controlled.

No way? None at all? It’s not like the idea of having the government directly control the cost of medical care is some untried theory. It’s been used in one form or another by literally every other advanced country on earth. And all of them have a vastly more cost-effective system than the United States: 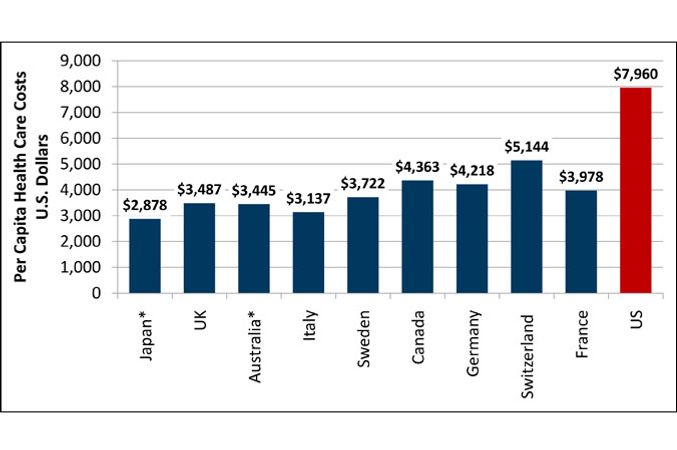 I’m not saying it’s easy as pie for the United States to bring its cost and value in line with other countries. But the sheer immodesty of Brooks’s analysis is pretty striking in the face of the overwhelming force of the international comparisons.

A few years ago, I wrote an essay describing what I think is the fundamental difference between economic liberalism and economic conservatism in contemporary American politics. Conservatives are committed to the free market as a value system in a way liberals are not committed to government. Conservatives see small government as an end in and of itself (it inherently promotes freedom) while liberals generally support government only if they believe it to provide concrete benefits. I argued that a lot of conservative reasoning on economics is backward reasoning, beginning with the assumption that markets are correct and then working to fill in the details. For one example, I picked out Brooks writing about health care:

For this reason, conservatives have almost nothing to say about adverse selection. When they do write about the topic, they tend to call for bromides like (to take an example from a David Brooks New York Times Magazine essay last year) “reforming the health-care system so competition works as it does in every other sphere — to improve value, spur innovation and reduce costs.” This is classic backward reasoning: Start with a solution (competition) and then proceed to make it fit the problem. In this case, the author doesn’t even explain how to make the solution fit the problem. He simply assumes that it can be done because market forces work everywhere and always.

That is the same thought process on display in Brooks’s column today. He knows the government must fail and the market must succeed. Neither the vast theoretical work about the ways in which the health-care market does not work like a market, or the even more vast real-world evidence of successful government-managed health-care systems seem capable of budging his certainty.

And Brooks, of course, is hardly one of the more dogmatic conservatives. Which makes the point all the more clear.