You’ll get nothing and like it. Photo: Astrid Riecken/2011 Getty Images

You know the Republican mantra you’ve been hearing for three years, “repeal and replace”? Mitch McConnell admits in an interview with Ramesh Ponnuru that the real plan is just plain repeal:

If the court keeps the law and McConnell becomes Senate majority leader, he vows that “the first item up would be to try to repeal Obamacare.”

But he doesn’t favor comprehensive legislation to replace it. “We would want to more modestly approach this with more incremental fixes,” he told me. “Not a massive Republican alternative.”

Two ideas McConnell mentions are allowing people to purchase health insurance across state lines and reforming medical-malpractice laws. Neither idea would do much to increase coverage, and McConnell didn’t mention one idea — changing the tax treatment of health insurance — that would, perhaps because his party hasn’t reached a consensus on it.

It’s worth keeping this in mind, as health-care reform goes before the Supreme Court. The choice we face is not between Obamacare and some different, even more “market-friendly” alternative reform. It’s between Obamacare and subjecting millions of Americans to the insecurity and suffering of lacking health insurance. The uninsured can have the Republicans’ answer now. Their offer is this: nothing.

The GOP has, to this point, been pretty cagey about this. Generally, they’ve said they favor an alternative, but the actual votes they’ve taken have simply been to yoink health insurance away from 30 million Americans and leave them out in the cold.

Ponnuru mentions McConnell’s lack of endorsement for changing the tax treatment of health insurance. That isn’t a solution to the health care crisis, but it is at least a good start that has a lot of conservative intellectual support. Right now, companies can deduct the cost of providing health insurance to their employees. A tax deduction is worth however much that employee would have paid in income taxes, meaning that it’s regressive, providing larger subsidies to workers who earn more. Making it an even tax credit would make the system more fair.

But it’s not just that McConnell isn’t endorsing that change. The Republican budget essentially makes that reform impossible.

The budget includes a tax reform plan that would lower tax rates, with the top rate dropping to 25 percent, and supposedly make up the lost revenue by eliminating deductions. They would need to eliminate more than half the deductions in the tax code. If you look at the makeup of tax deductions, though, you can see the problem: 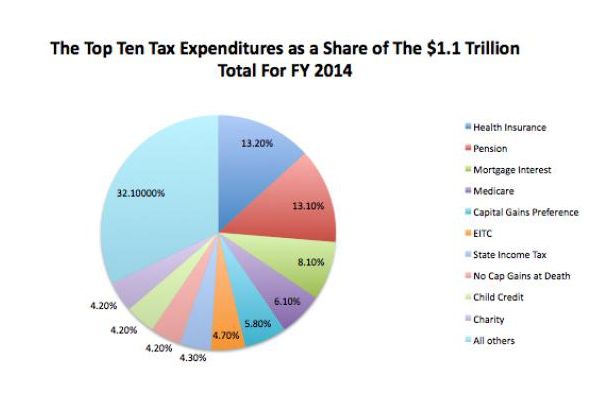 The largest tax deduction is the lower rate for capital gains income, something Republicans have pledged to maintain or even deepen. If they keep that one in place, in order to make the numbers add up, they would have to eliminate the tax deduction for employer-provided health care. But they have already committed to use that revenue in order to reduce tax rates. That would mean they couldn’t replace it with a tax credit.

Surprise! The plan is to repeal health-care reform and use the funds they could have devoted to helping some of the uninsured for a tax cut that largely benefits the rich instead.

+Comments Leave a Comment
McConnell Admits Plan for Uninsured: Nothing