If you want to know why the health-care debate has been so pathological, take a moment to read William Kristol’s editorial in the Weekly Standard. The theme of the editorial is that Mitt Romney is undesirable because he is a technocrat. “What Republican primary voters sense,” Kristol editorializes, “is that a technocratic and managerial mindset could prove an obstacle to coming to grips with the situation we face.” Romney seeks — or once sought — through data and detailed analysis. This, according to esteemed conservative intellectual William Kristol, is bad.

This hostility to empiricism has defined the conservative approach to health care. How else could a concept developed by a conservative think tank, implemented by a Republican governor, and largely uncontroversial within the conservative world suddenly become the death of freedom? Because the conservative movement’s understanding of concepts like “freedom” is a hazy ideological abstraction, unmoored from factual grounding, that can attach itself to nearly any partisan position. If you’re uninterested in the details (or even, like Kristol, actively hostile to the very idea of being interested in the details) then your disposition toward one idea can easily lurch from mildly supportive to hysterically in opposition.

A telling case in point came last week. The Congressional Budget Office issued an update on the costs of the Affordable Care Act. Congress (stupidly, I think) designed the law to phase in slowly, so that its provisions took several years to take effect. When CBO first scored the budgetary effects of the law in 2010, it included the first few years in which not much was happening. Its revised ten-year score two years later now loses two years of nothing on the front end, and includes two more years on the back end in which the law is in full effect.

The CBO update prompted a new round of conservative frenzy. “The CBO foresees 87 percent overrun, not even 24 months into this boondoggle,” cries National Review’s Deroy Murdock. “The Congressional Budget Office has extended its cost estimates for President Obama’s health-care law out to 2022, taking in more years of full implementation, and showing that the bill is substantially more expensive — twice as much as the original $900 billion price tag,” reports Fox News. Nearly every corner of the conservative media world repeated the story.

The outcry was so widespread that the CBO took the unusual step of releasing a second update to explain to outraged conservatives that they were completely misreading the whole thing:

Some of the commentary on those reports has suggested that CBO and JCT have changed their estimates of the effects of the ACA to a significant degree. That’s not our perspective. …

Although the latest projections extend the original ones by three years (corresponding to the shift in the regular ten-year projection period since the ACA was first being developed), the projections for each given year have changed little, on net, since March 2010.

That is CBO-speak for: “Go home. You people are all crazy.”

The CBO even included a helpful chart showing how its latest cost estimate had barely changed — indeed, it was now projected that the law would reduce the deficit by slightly more than it had originally forecast: 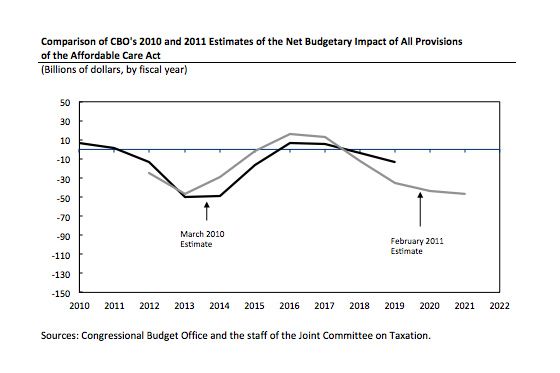 This is hardly a unique episode. The health-care debate has been driven by flamboyant cries over death panels, or more wonky claims that the cost estimates had been “cooked” by using mythical savings from reducing physician pay. (Another totally bogus, endlessly recycled right-wing talking point, which you can read up in if you’re interested.) The conservative media have created an echo chamber in which nonsensical claims reverberate endlessly, and those few conservative intellectuals who know better refrain from correcting their teammates. If you want to know how a moderate Republican health-care plan can become, in the right-wing mind, a devious socialist plot, this is how the process happens.