Political pundits around the country sprinted downstairs in their pajamas this morning and tore open their laptops, bursting with excitement for the day they’ve all been waiting for: Super Tuesday, a pivotal date in the race for the GOP presidential nomination. With ten states holding their primaries or caucuses today, much is at stake — not only 437 delegates, but also a chance for Mitt Romney and Rick Santorum (maybe even Newt Gingrich?) to fundamentally alter the campaign’s narrative.

But the enthusiasm of political nerds aside, is Super Tuesday as super as advertised? It’s important, sure, but how super is it, really? In an effort to find out, we pitted sixteen self-described “super” things from the worlds of entertainment, politics, sports, and glue up against each other in a March Madness—style single-elimination competition.

We started by seeding each “super” thing based on a completely objective evaluation of its superosity:


The teams were then matched up against each other based on their respective rankings, with the victory going to whichever team boasted the most inherent superness in our head, at that moment. There was only one upset in the first round, with the ninth-seed Seattle SuperSonics just edging out eighth-seeded “Super Freak,” thanks to a strong performance by Detlef Schrempf. All of the politics-related “super” things — including Super Tuesday — were quickly eliminated.

In the second round, Superman quickly halted the SuperSonics’ miracle run; Super Mario Bros. defeated supergroups, which are almost never as good as the hype; and Super Bowl rolled right over Super Glue, which you can never find when you need it. The only upset in the second round was Super Soakers over supernovas, which was, in all honesty, a pretty big shock, considering the awesome power and beauty of a supernova. But, then again, we’ve all probably had a really good time with a Super Soaker at some point.

Let’s cut to the chase. It came down to Superman and the Super Bowl in the championship game, a matchup for the ages. It really could have gone either way, but when the dust settled, the Super Bowl, on the strength of buffalo wings, came out on top as the most super of all the “super” things. 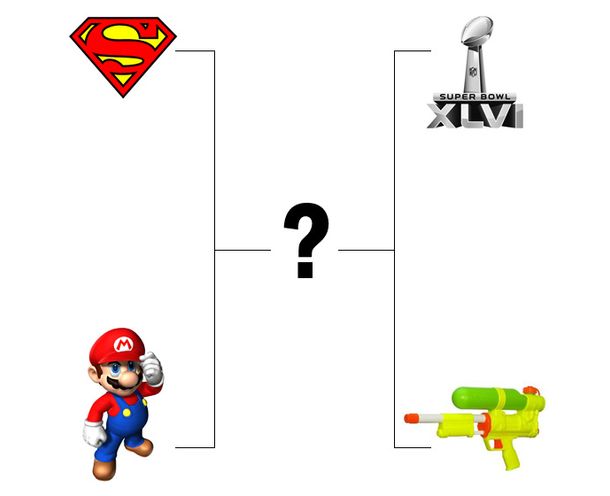 So there you have it. Super Bowl: superior superness. Super Tuesday: important, but, relatively, not that super.

+Comments Leave a Comment
Super Tuesday Versus Other Super Things

THE FEED
1/27/2022
politics
politics
The Right Has Mastered Cancel Culture
By Sarah Jones
Glenn Youngkin’s anti-CRT hotline exemplifies an illiberal trend.
1/27/2022
covid-19
covid-19
How to Get Free N95 Masks From the Government
By Chas Danner and Margaret Hartmann
Starting this week, the Biden administration will distribute 400 million free N95 masks. Here’s everything we know about the program.
1/27/2022
today in eric adams
today in eric adams
Mayor Opens Airport, Demands End of Trauma
By Tirhakah Love
Please don’t be a mess near this man.

1/27/2022
politics
politics
Can Kamala Harris Break a Tie on a Supreme Court Confirmation?
By Ed Kilgore
In 2020, Laurence Tribe claimed the vice-president has no tiebreaking powers on judicial confirmations. Republicans are looking into the theory.
1/27/2022
politics
politics
Democrats Are Playing Catch-up on Supreme Court Nominations
By Ed Kilgore
Republicans have appointed the lion’s share of justices in recent decades. Biden needs to make the most of his rare opportunity.
1/27/2022
the national interest
the national interest
Biden Didn’t Invent Affirmative Action for the Supreme Court
By Jonathan Chait
Conservatives attack the president for promising to appoint a Black woman to the Court.
1/27/2022
covid-19
covid-19
Where to Get Home COVID Tests and Why They’re So Hard to Find
By Margaret Hartmann
Here are all your current options, including where tests are in stock, insurance reimbursement, and how to get free tests from the government.
1/27/2022
media
media
Sarah Palin Paints the Town COVID
By Shawn McCreesh
She shocks the capital of blue America, unvaccinated and unashamed.
1/27/2022
our climate
our climate
The World Can’t Go Green and Nuclear Free
By Eric Levitz
Nuclear energy is the only existing non-carbon technology that can compensate for renewables’ liabilities.
1/27/2022
the national interest
the national interest
The Republican Party’s Anti-Vaxx Wing Is Too Big to Fail
By Jonathan Chait
Too late to purge the kooks.
1/27/2022
bitcoin
bitcoin
Diamond Hands in the Rough
By Kevin T. Dugan
Watching billions get wiped out doesn’t shake a new kind of trader who’s used to 24/7 crypto chaos.
1/27/2022
politics
politics
Will Sinema and Manchin Screw This Up?
By Ben Jacobs
Nothing may unite Democrats better than putting the first Black woman on the Supreme Court.
1/26/2022
the federal reserve
the federal reserve
Fed to Markets: The Prices Are Too Damn High
By Eric Levitz
Jerome Powell told markets what they expected to hear Wednesday, albeit in a slightly more hawkish tone than some anticipated.
1/26/2022
education
education
Glenn Youngkin Won’t Stop Undermining Public Schools
By Ed Kilgore
It’s ludicrous to think that parents alone should control every school decision affecting their kids.
1/26/2022
politics
politics
Stephen Breyer and the End of the Apolitical Supreme Court
By Ed Kilgore
Even John Roberts and Amy Coney Barrett claim to be above politics. But Breyer may be the last justice to actually believe it.
1/26/2022
supreme court
supreme court
Stephen Breyer Secures His Legacy
By Irin Carmon
The liberal justice’s retirement ensures that Joe Biden will have a shot at nominating a Black woman to the Supreme Court.
1/26/2022
sports
sports
The Baseball Hall of Fame Is As Broken As Everything Else in America
By Ben Jacobs
The moral uncertainty of the steroid era has left the venerable institution in a dark place.
1/26/2022

CNN’s @wolfblitzer reports: “Supreme Court Justice Breyer plans to retire, giving Biden chance to nominate to the bench”
—@brianstelter
1/26/2022
2022 midterms
2022 midterms
Pelosi to Run for House Again … But Not for Speaker?
By Ed Kilgore
She pledged to step down as Democratic leader at the end of this Congress. But unless she changes her mind, she will stay around as a living legend.
1/26/2022
our climate
our climate
To Fight Climate Change, Bring Back State Planning
By Kate Aronoff
The United States has the tools to transition to a greener economy. Why isn’t it using them?
1/26/2022
covid-19
covid-19
Partisanship Made the Omicron Crisis Worse
By Eric Levitz
Could America have averted a huge wave of COVID deaths?
1/25/2022
covid-19
covid-19
New York State’s Mask Mandate Reinstated, For Now
By Chas Danner
A state appellate court judge granted a stay after the state sued to block an earlier ruling which struck down the mandate.
1/25/2022
ukraine
ukraine
Let’s Call a Weapon a Weapon
By Matt Stieb
Examining what “lethal aid” to Ukraine really means.
1/25/2022
2022 midterms
2022 midterms
J.D. Vance Wins the Marjorie Taylor Greene Primary
By Ed Kilgore
The fiery MAGA extremist Greene has accomplished nothing in Congress. But she’s a power nonetheless and could help Vance win a Senate primary.
1/25/2022
the internet
the internet
Is Trump’s Truth Social Trying to Trick Influencers Into Joining?
By Margaret Hartmann
Curiously, the former president’s name was totally absent from a recent email invitation to join his forthcoming Twitter rival.
1/25/2022
crime
crime
Second NYPD Officer Dies From Injuries Following Harlem Shooting
By Nia Prater
Wilbert Mora, 27, had been hospitalized in critical condition since he and another officer were gunned down in the line of duty on Friday.