In what is becoming an increasingly well-known sequence of events, on February 26, during halftime of the NBA All-Star Game, 17-year-old Trayvon Martin walked to buy Skittles and iced tea from 7-Eleven in Sanford, Florida. On his way back to his father’s house in a gated community, Martin was shot and killed by George Zimmerman, a neighborhood watch captain who had just called 911 to report Martin as “a real suspicious guy.” Zimmerman, a 28-year-old Latino man, claimed self-defense and has not been arrested or charged, but now finds himself at the center of a prickly national conversation about race, guns, and more. What started as a local news story has, thanks in large part to Internet outrage, become an unavoidable, albeit unresolved, story covered everywhere from leftist blogs to CNN and the New York Times.

Over the weekend, police released eight 911 calls related to the case, sparking a new round of press attention. In the recordings, Zimmerman, who called the police nearly 50 times in the last year, can be heard saying, “This guy looks like he’s up to no good or he’s on drugs or something.” Martin, he said, had “his hand in his waistband. And he’s a black male … Something’s wrong with him. Yup, he’s coming to check me out. He’s got something in his hands. I don’t know what his deal is.” He added, “These assholes, they always get away.”

The dispatcher tells Zimmerman not to follow Martin, but in subsequent calls from neighbors, a struggle can be heard, followed by a gunshot. Mother Jones has a very detailed rundown of the case, and the tangential issues it raises, including, but not limited to, Florida’s self-defense laws, the checkered past of the Sanford police, gun control, and potential federal government involvement.

A petition from Martin’s family to the local D.A. has been signed online more than 400,000 times, and received a huge boost this weekend as the media homed in on the disturbing details. The New York Times reported on the story for two straight days in its national news section, in addition to a Saturday column by Charles Blow. “This case has reignited a furor about vigilante justice, racial-profiling and equitable treatment under the law,” Blow wrote, “and it has stirred the pot of racial strife.”

USA Today and the Washington Post also featured detailed reports over the last few days, as did both New York City tabloids. Local Florida publications have been on the story since the beginning, although they lack the reach of the nation’s biggest newspapers. But before it was in the hands of influential columnists, the story had already become unavoidable online. As early as March 8, Huffington Post reporter Trymaine Lee was spreading the story, following up seven times since. The site now has a dedicated section and banner for “The Trayvon Martin Tragedy.”

The details behind Martin’s death have spread socially too. “Trayvon Martin didn’t die so we can create a race war, he died so we can promote better understanding,” Russell Simmons tweeted, pointing to a Facebook page with thousands of followers. Following suit, Google traffic has skyrocketed in the last few days: 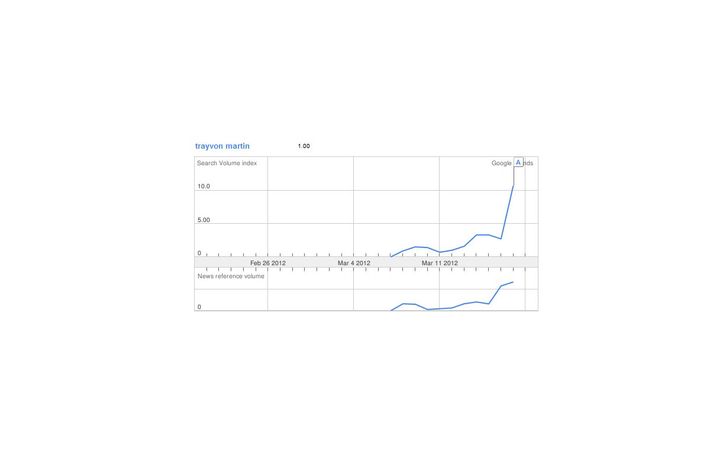 And Martin has become a fixture on cable news, as well — with one exception: The progressive blog Think Progress reports that through this afternoon, CNN had dedicated 41 segments to the killing, compared to MSNBC’s thirteen, and just one on Fox News. Political implications aside, this story is now officially too big to ignore.

Update: Asked about the shooting this afternoon, White House spokesman Jay Carney said, “We here in the White House are aware of the incident, and we understand that the local FBI office has been in contact with the local authorities and is monitoring the situation.” He added, “Our thoughts and prayers go out to Trayvon Martin’s family, but obviously we’re not going to wade into a local law enforcement matter.”