Pew is a polling outfit that polls less often than other organizations, but polls lots of people, giving it a huge sample size that lets it dig deep into the electorate. The most interesting finding in this month’s poll is that the demographic trends that helped propel Barack Obama’s election in 2008 haven’t stopped at all.

I wrote about these trends in the magazine a couple months ago. The demographic premise provoked some disagreement, on both the left and (especially) the right. The nub of the dispute is that things can change, and the forces that brought young and nonwhite voters into the Democratic camp in 2008 may abate in 2012. That, however, is not happening, at least not yet.

Pew’s survey offers the clearest evidence that the new elements of Obama’s coalition are as strong as ever. He leads among voters under the age of 30 by 28 points, and among Latinos by 40 points, figures approaching his 2008 showing. Among young voters, Republicans face a double bind. First, the youngest voting cohort is more nonwhite than any other. Second, those voters who are white are far less Republican. In Pew’s poll, white voters under 30 split for Obama over Mitt Romney 48-46 — Romney outpolls Obama by 17-19 points among every other white age group. For what it’s worth, a PPP poll of Florida also found a huge Obama advantage among young voters.

You may wonder why, say, the Gallup poll has Romney slightly ahead? It’s because its sample of likely voters assumes that nonwhite will make up not just a smaller slice of the electorate than 2008, but even slightly smaller than the off-year election of 2010. It’s common for young and minority voters to stay home during off-year elections. But a whiteout of that magnitude in 2012 seems highly unlikely, given that the nonwhite share of the presidential electorate has been steadily increasing for two decades: 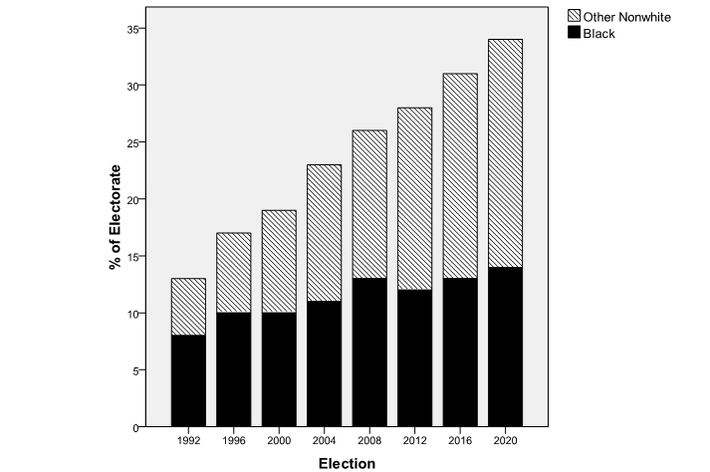 The Pew poll is not necessarily bad news for Romney. He only trails by four points. What’s keeping him in the game is that he’s doing even better among white voters without a college degree than even John McCain did. McCain dominated this cohort, winning it by 18 points. Romney is winning by 23 points. Obama is basically doing as well with every other part of the electorate as he did four years ago — he’s running ever-so-slightly better among white college graduates and Latinos.

Romney isn’t that far behind Obama. The problem for his party is that white voters without a college degree are shrinking steadily as a proportion of the electorate over time, and the GOP continues to become more dependent on it for votes.

Mitt Romney Once Again Forgets That He Went to Harvard