Wait, so, refresh my memory. What is a Kony again?
It’s been less than a month! But okay, here it goes: Joseph Kony is the Ugandan rebel leader wanted by the International Criminal Court since 2005 for his human rights abuses; pretty much everyone can agree he’s a bad dude. Kony 2012 is much more polarizing: It’s a campaign by the nonprofit Invisible Children meant to raise awareness and ultimately capture or kill Kony.

But why did all my Facebook friends suddenly care?
Well, the group put out a 30-minute documentary online at the beginning of March that was very emotional (if problematic!). Using hashtags like #StopKony and #MakeKonyFamous, the clip spread like crazy, thanks in large part to the group’s expert targeting of celebrities including Oprah and Kim Kardashian. It became the fastest online video ever to be viewed 100 million times.

And then what?
Well…

The backlash was hard and fast: Questions arose about the group’s finances and donors, which included some anti-gay, creationist evangelical groups. A lot of critics said that tweeting a link is one thing, but it’s certainly not activism. The video was shown in Uganda, and that was a bit of a disaster, too.

A few days later, Invisible Children co-founder Jason Russell had a huge public meltdown, freaking out naked in the street, and the whole thing was reduced to a punchline.

And then?
As you can see from the Google trend above, people basically stopped caring. Jason Russell had his peak as well, but that one didn’t exactly help the cause: 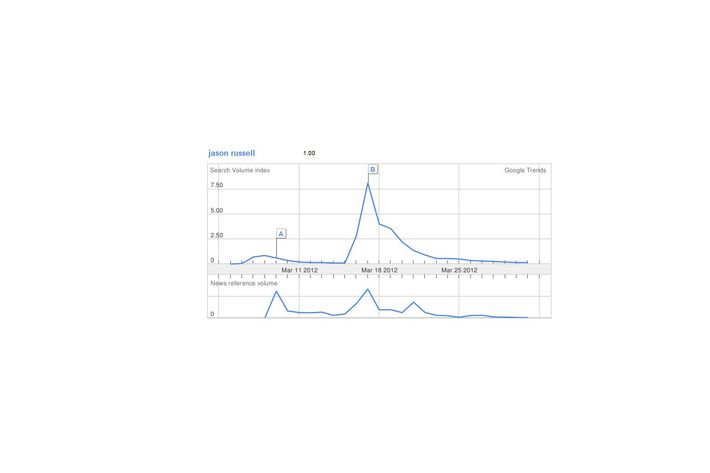 What happened to the naked guy?
He wasn’t charged with a crime.  His wife has since said it was a “brief reactive psychosis,” on account of all the stress from the video. “Because of how personal the film is, many of the attacks against it were also very personal, and Jason took them very hard,” she said. “He is, and will remain, under hospital care for a number of weeks; and after that, the recovery process could take months before he is fully able to step back into his role with Invisible Children.”

“He is on the road to recovery,” said an Invisible Children colleague recently. “It’s going to be months, the doctors say, but he is recovering.”

Can we stop Kony without him?
Maybe! He’s not been caught yet, but “Kony 2012: Part II” comes out this week (although probably not tomorrow, as widely reported):

KONY 2012 Part II promises to go more in-depth about the intricacies of the conflict in Uganda, responding to critics of the film who say the organization distorted and simplified realities about Joseph Kony and the LRA.

Invisible Children’s director of ideology Jedidiah Jenkins told Reuters the sequel will include more voices from the countries where Kony and the LRA are currently based, such as the Central African Republic and the Democratic Republic of the Congo.

It sounds like they at least heard some of the criticisms of the first film, but will anyone care this time around?
We’ll see. Compared to the crazy phenomenon last time, it’s bound to be something of a disappointment. Even though the story of Kony wasn’t new, a lot of people were completely unaware, and thus affected. This time, the shock value is absent. Plus, Invisible Children might’ve used up some of its good will. Online hordes are fickle, and a complicated international conflict isn’t the easiest thing to grasp and hang on to. That said, The Daily Beast reports on some upsides for Invisible Children:

The charity’s current pledge count is 3.5 million. On March 21 a bipartisan group of 33 senators sponsored a resolution condemning Kony’s war crimes, and other lawmakers are talking about gathering up private funding for a bounty. Two days after the Senate resolution was introduced, the African Union announced it was sending 5,000 soldiers to look for Kony.

As for continued public awareness, Invisible Children have the contacts now — the struggle is staying out of the spam folder.

+Comments Leave a Comment
What Happened to the Kony 2012 Campaign?