This is going to end well. Photo: Chip Somodevilla/Getty Images

Last Friday, the National Rifle Association held its annual convention. You might think that the total absence of any gun-control agenda by the current administration would have mollified the group’s bug-eyed fear. Indeed, the NRA said as much four years ago. In 2008, the gun lobby fervently insisted that Obama, whatever he said, was secretly planning a vast campaign to confiscate guns. But they were happy to be proven wrong. “I hope President-elect Obama keeps his promises and protects gun rights,” said Wayne LaPierre. “If he does that, we’ll be cheering.” Obama has kept his promise. But LaPierre is not cheering — he has simply moved the date of the Obama gun-confiscation conspiracy to the second term, and the NRA is as hostile and paranoid as ever, despite no legislative opposition whatsoever.

The NRA offers a useful window into a question that has hung over the Obama presidency: Why has he failed to reduce partisan hostility? The two parties have dueling narratives, with Republicans blaming Obama’s high-handedness and radical agenda, and Democrats blaming Republican obstructionism and increasingly radical ideology. And indeed, according to objective measures, the House GOP caucus has been moved very far right while the House Democrats have barely budged: 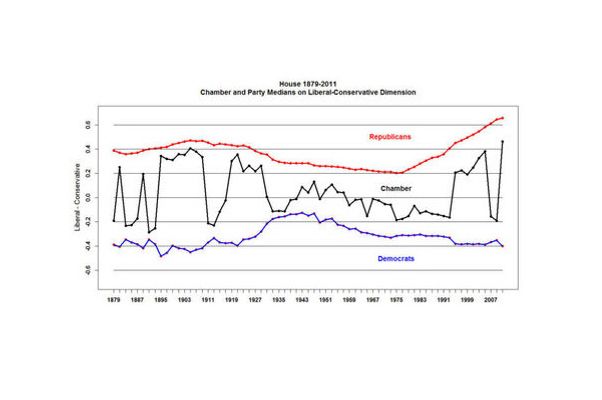 The NRA case study supports the Democratic story. Here is an example of a single-issue lobby that has gotten 100 percent of what it wanted, yet has remained implacably hostile. Now, you can’t fully generalize from the NRA to the GOP as a whole. The NRA is full of people who, while nominally focused on a maximal pro-gun agenda, in fact hold a wide range of conservative views. They probably devote a great deal of their mental energy to feeling angry about the kinds of things that anger other conservatives about Obama. If Obama had offered full capitulation on his entire domestic and foreign agenda, most likely conservatives would feel at least somewhat less hostile toward him, and the reduced hostility would spill over to the conservatives at the NRA.

But total capitulation is setting the bar fairly high. Is there anything Obama could have done, without abandoning all the goals he set out in his campaign, to prevent Republicans from waging war against him? What would be a reasonable set of criteria to define Obama as having reached out to the GOP?

As it happens, the conservative writer Peter Berkowitz wrote a story in the Weekly Standard devoted to exactly that topic just after Obama won the 2008 election. Headlined “Supposing Obama Were a Bipartisan,” the piece conveyed a note of skepticism that the newly elected president truly would live up to his image. Berkowitz listed seven things Obama could do to prove that he actually was the bipartisan figure he presented himself to be. Here is his list, in italics, interspersed with my update:

1. Obama should defend the integrity and independence of the executive branch that he will soon head by resisting calls from congressional Democrats to pursue criminal investigations of Bush administration officials.

3. Obama’s first appointment to the Supreme Court should be a judge’s judge, a Democrat no doubt, but one who commands the respect of conservative court watchers.

This one is sort of hard to define, but Obama’s first appointment, Sonia Sotomayor, was generally described as mainstream by Republicans.

4. Obama should institute a practice of regular consultation with members of Congress, including Republicans, perhaps inviting them to the White House once a month to compare notes and exchange views.

Obama did begin his presidency by consulting with Republicans, some of them repeatedly. Obama was stunned when the GOP leadership indicated in the opening weeks of his presidency it would totally oppose any economic stimulus plan, and announced that his defeat was their top priority. Republicans would probably reply that the ideology of his agenda left them with no choice. In any case, the causes of the breakdown of the meetings simply beg the question.

5. Obama, who has touted his support for charter schools, should endorse school choice.

6. Obama should clearly state his opposition to reviving the so-called Fairness Doctrine.

If you don’t know what this one means, it was the focal point of right-wing paranoia during the initial months of the Obama presidency. Conservatives convinced themselves that Obama was planning to revive the “Fairness Doctrine” in a way designed to close down large segments of the conservative media. It was a pure fantasy, and nothing like it ever happened or was ever considered.

Obama did not do this, as far as I know. But if he had done it I don’t think anybody would have noticed. This item, the last on Berkowitz’s list, seems like an idiosyncratic list-filler. (I also hated speech codes when I was in college, but has this issue popped up at all since 2008?)

So it seems that, depending on how you measure things, Obama fulfilled virtually all of Berkowitz’s criteria for bipartisanship. And yet, by August of 2009, Berkowitz himself was accusing Obama of having pulled a “bait and switch.” The key accusation in the indictment is that Obama decided to pass a large economic stimulus. Berkowitz had imbibed the conservative suspicion that Obama used the crisis as a pretext to pass a stimulus:

Plenty of competent observers were flabbergasted shortly after he took office when, notwithstanding an economic crisis that he himself declared the worst since the Great Depression, he called for and signed into law a $787 billion stimulus package short on stimulus spending, high on transfer payments, and larded with pork aimed at pet Democratic party special interests.

Note his use of the term “notwithstanding.” The administration decided to pass a stimulus because of the economic crisis. Berkowitz, by 2009, believed, along with many Republicans, that Obama had cooked up the stimulus for reasons unrelated to the crisis, that the crisis made a stimulus less justifiable than it previously had been, and that he decided to pass it anyway. Even aside from the apparent lack of understanding of Keynesian economic principles, this account bears no relation to the actual deliberations that led to the stimulus, which have been chronicled in detail by numerous reporters.

I’m focusing on Berkowitz because he happens to be the only conservative I know of who actually defined, in advance, a list of things Obama could do that would fulfill his criteria for being bipartisan. That gives his list value as a kind of natural experiment. To be sure, he is just one individual. But he’s not a talk-radio ranter. He’s closer to the moderate end than the extreme end of the conservative movement, he pays at least some attention to what liberals say, and he’s written for non-conservative publications. It seems overwhelmingly likely that the wall of conservative rage and distrust would have been built almost regardless of what Obama did, and that conservatives would have interpreted almost any agenda he put forward through a lens of paranoia.

How Obama Tried to Sell Out Liberalism in 2011

+Comments Leave a Comment
Why Did Obama’s Bipartisanship Fail?

1:50 p.m.
media
media
Sarah Palin Postpones Court Date by Contracting COVID
By Victoria Bekiempis
She was just about to face off against the New York Times.
1:14 p.m.
covid-19
covid-19
Where to Get Home COVID Tests and Why They’re So Hard to Find
By Margaret Hartmann
Here are all your current options, including where tests are in stock, insurance reimbursement, and how to get free tests from the government.
9:51 a.m.
covid-19
covid-19
How to Get Free N95 Masks From the Government
By Chas Danner and Margaret Hartmann
Starting this week, the Biden administration will distribute 400 million free N95 masks. Here’s everything we know about the program.
9:00 a.m.
our climate
our climate
Toward an Energy Democracy
By Olúfẹ́mi O. Táíwò
Why political transformation is necessary to combat climate change.
8:00 a.m.
2022 midterms
2022 midterms
Democrats Need Republican Mistakes to Hang On to the Senate
By Ed Kilgore
A normal midterm swing could help Republicans sweep close Senate races. But Trump and intraparty problems could help Democrats keep control.
7:00 a.m.
the intelligencer profile
the intelligencer profile
Was Larry Summers Right All Along?
By Eric Levitz
How the ultimate Establishment figure became the preeminent critic of the Biden era’s economic consensus.
1/23/2022
the law
the law
Biden’s Monopoly Games
By Ankush Khardori
Biden’s team was supposed to bring a shift in antitrust thinking, but its leaders sound a lot like the traditionalists they were supposed to replace.
1/23/2022
business
business
How Museums Are Trying to Figure Out What NFT Art Is Worth
By Kevin T. Dugan
Among other complexities, the often secretive process for establishing the insured value of a painting doesn’t work with a Bored Ape.
1/22/2022
new york city
new york city
What We Know About the Shooting of Two NYPD Officers in Harlem
By Intelligencer Staff
Officer Jason Rivera, 22, was shot and killed in the line of duty in Harlem on Friday. Officer Wilbert Mora, 27, remains in critical condition.
1/22/2022
politics
politics
Biden Didn’t Have the Power or Luck to Become FDR or LBJ
By Ed Kilgore
Biden is trying to govern in an era totally unlike the 1930s or 1960s with little margin for error and a lot of nasty surprises. Give him a break.
1/21/2022
wall street
wall street
The End of the Pandemic Boom Is Nigh
By Kevin T. Dugan
Netflix, Peloton, and other Wall Street winners of the pandemic economy are running out of steam.
1/21/2022
the city politic
the city politic
Everyone Needs to Take a Deep Breath About Alvin Bragg
By Errol Louis
His criminal-justice reforms have prompted a freak-out, but they’re reasonable — and exactly what he promised.
1/21/2022
aviation
aviation
5G Will Not Make Your Plane Fall Out of the Sky
By Jeff Wise
Why did U.S. airlines fly into a panic over this?
1/21/2022
the national interest
the national interest
Trump Unable to Grasp Hannity’s ‘Banging Head Against Wall’ Metaphor
By Jonathan Chait
Former president thinks he’s being asked about literal wall.
1/21/2022
encounter
encounter
Is the Next Great Pastime … Pickleball?
By Giri Nathan
Connor Pardoe wants to turn the racquet sport, once a game for retirees, into a primetime event.
1/21/2022
criminal justice
criminal justice
Is Solitary Confinement Here to Stay at Rikers Island?
By Matt Stieb
The movement to ban it slammed into a wall of opposition, first from Bill de Blasio and now from Eric Adams.
1/20/2022
election coup
election coup
The Election Law Central to January 6 Might Actually Get Fixed
By Ed Kilgore
Both Mitch McConnell and Kevin McCarthy are “open” to reform of the Electoral Count Act.
1/20/2022
literature
literature
Trump Invites Congress to Election-Lie Book Club
By Margaret Hartmann
Sending every House Republican a book about the “rigged” election just makes him look desperate.
1/20/2022
politics
politics
Never Mind the Facts. Trump Fans Feel Like a Majority
By Ed Kilgore
When you’ve been convinced polls are fake and actual elections are rigged, it is easy to confuse visible signs of enthusiasm as a ticket to power.
1/20/2022
questions
questions
Can I Eat M&M’s Without Having to Think About Their Personalities?
By Sarah Jones
Corporate America has gone too far.
1/20/2022
havana syndrome
havana syndrome
CIA: (Most) Havana Syndrome (Probably) Not Caused by Foreign Attack
By Margaret Hartmann
The agency’s interim findings bolster the “mass sociogenic illness” theory but are frustratingly inconclusive.
1/20/2022
politics
politics
Of Course, Eric Adams Is Turning His Paycheck Into Crypto
By Kevin T. Dugan
The mayor once talked about getting paid in bitcoin, but he’ll have to settle for the next best thing.