Hillary Clinton’s coolness offensive continues apace: After swilling beer and dancing on a South American jaunt and responding good-humoredly to an Internet meme about her, now she’s out-charming a charming actor. Jason Segel, one of the stars of How I Met Your Mother, has been known to joke that the still-unrevealed mother on the show will turn out to be Hillary Clinton.

He also recently told Us Weekly he’d love for Clinton to appear in a sequel to Forgetting Sarah Marshall (not an actual project). Clinton, it seems, was tickled by the offer, but is playing hardball. It’s exactly the kind of negotiation we like to see from America’s chief diplomat! 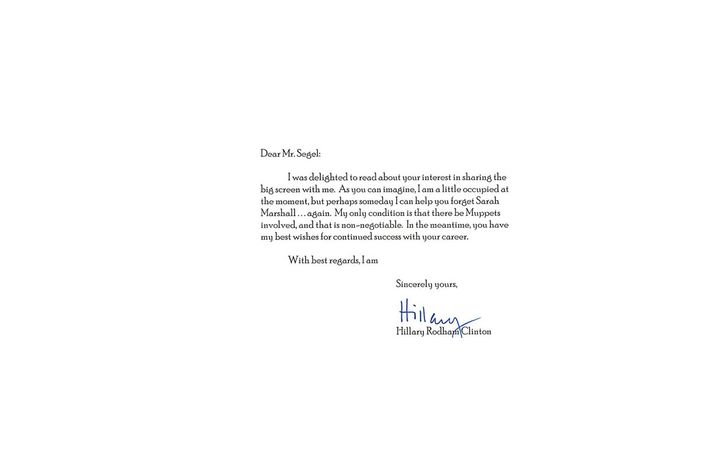 THE FEED
6:57 p.m.
early and often
early and often
Los Angeles D.A. Avoids Chesa Boudin’s Fate
By Ed Kilgore
A like-minded recall effort targeting district attorney George Gascon, backed by the police and other prosecutors, has fallen short.
6:15 p.m.
what we know
what we know
Salman Rushdie Is on the ‘Road to Recovery’ Following Gruesome Attack
By Chas Danner and Victoria Bekiempis
The acclaimed author was grievously wounded and remains hospitalized but was taken off a ventilator and again able to speak on Saturday.
4:40 p.m.
tremendous content
tremendous content
11 Questions About the Dr. Oz Crudités Video
By Margaret Hartmann
Paying too much to dip raw asparagus in salsa may not be a relatable problem for Pennsylvania voters.

4:22 p.m.
the city politic
the city politic
Liz Holtzman on Why Guts and Expertise Matter More Than Age
By Nia Prater
The 81-year-old former congresswoman says she feels called to get back in the fight.
3:07 p.m.
the money game
the money game
Why Is Anyone Still Betting on Adam Neumann?
By Kevin T. Dugan
Venture-capital behemoth Andreessen Horowitz placed its biggest-ever bet on what looks to be a rent-to-own empire.
1:05 p.m.
plagued
plagued
What Is Going on With America’s COVID Booster Plan?
By Chas Danner
The Biden administration wants to reboot the U.S. booster drive with reformulated vaccines this fall. Here’s what we know.
11:44 a.m.
what we know
what we know
Top-Secret Documents at Trump’s Mar-a-Lago: What We Know
By Intelligencer Staff
The search warrant used by the FBI was unsealed, and it shows potential violations of the Espionage Act.
10:00 a.m.
books
books
Trump’s Fathers
By Sarah Jones
Two recent books demonstrate the GOP’s long descent from reason and a country in serious danger.
8:00 a.m.
the money game
the money game
The Crypto Geniuses Who Vaporized a Trillion Dollars
By Jen Wieczner
Everyone trusted the two guys at Three Arrows Capital. They knew what they were doing — right?
8/14/2022
the city politic
the city politic
New York Times Sticks It to Progressives in New York’s Democratic Primary
By Ross Barkan
The editorial board’s backing of Dan Goldman, Jerry Nadler, and Sean Patrick Maloney for Congress also shows a disdain for identity politics.
8/14/2022
u.s. capitol
u.s. capitol
Man Dies by Suicide After Driving Car Into Barricade Near U.S. Capitol
By Chas Danner
The man drove into a barricade and fired a gun in the air, but police don’t seem to believe he was targeting any members of Congress.
8/13/2022
the group portrait
the group portrait
The Subtle Differences of the Many Candidates for New York’s 10th District
By Errol Louis
It’s a very crowded race for one of the city’s most progressive districts.
8/13/2022
tremendous content
tremendous content
Trump Raid Can Satisfy Your O.J. Simpson–Scandal Nostalgia
By Margaret Hartmann
The latest sign the ’90s are back: a divisive scandal that ends with a guy going down for stealing his own memorabilia.
8/13/2022
the money game
the money game
Are We in a Recession or a Vibecession?
By Kevin T. Dugan
Some of the numbers are good, but the feelings are bad.
8/12/2022