Roger Ailes, in his day job, rules the Fox News media empire that has been the dominant force in cable news ever since he took on CNN’s entrenched monopoly in the mid-nineties. But now Roger Ailes, community newspaper baron, is about to find out what it’s like to be the Establishment player facing competition from an upstart insurgent.

On Friday, a new weekly newspaper is launching in Philipstown, New York, 60 miles north of Manhattan, to compete with the 146-year-old Putnam County News and Recorder, the broadsheet Ailes purchased in 2008 and that his wife, Elizabeth, now runs.

The Philipstown Paper is being published by Gordon Stewart, a former speechwriter for Jimmy Carter and business executive, who moved to Philipstown several years ago. It’s a sixteen-page full-color tabloid distributed at the post office as well as shops and businesses around town. Stewart tapped Joe Dizney, the former design director of The Wall Street Journal who lives in the area, to design the tabloid, which will have an initial print run of 3,000 copies. The tabloid is produced by a staff of five reporters and editors who have been putting out Philipstown.info, a free news website launched in 2010. The PCN&R comes out on Wednesday and costs $.50 on newsstands. The Philipstown Paper will be distributed for free every Friday. “All the available ad space is sold in the first issue,” Stewart said. “We’ve limited it to 50 percent of the total volume.”

Stewart has been planning his newspaper launch in secret, meeting with potential advertisers and lining up a printer. He chose the name of his weekly as a sort of guerrilla marketing tactic. In Philipstown, when people say “The Paper,” they automatically are referring to the PCN&R. Stewart selected the name so readers will have to specify which paper. “The phrase ‘The Paper’ is so ingrained here,” he says, so when they say it, “they’ll be discussing us.” 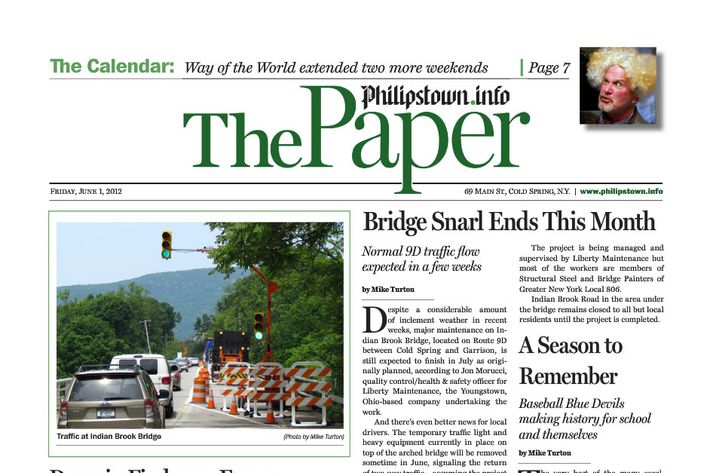 Ailes bought the local newspaper in July 2008 and installed his wife as publisher. Under the Aileses, the PCN&R took a rightward turn, alarming some local residents when it began publishing selections from the Federalist Papers. In May 2009, it ran a two-part editorial attacking the Obama administration’s stimulus plan. Around the same time, the paper aggressively covered a local debate over zoning, framing the story as a philosophical issue of property rights. With the paper, Ailes became a fixture in town. He renovated the paper’s office on Main Street and sponsored the annual July 4 fireworks celebration in 2010, hanging a large banner across Main Street. That year, he drove his vintage red Cadillac in the July 4 parade.

It was on July 4, 2010, when Stewart launched Philipstown.info, a local news website to compete with the PCN&R. The launch triggered a media war in town. Beth Ailes felt betrayed when Stewart staffed the site with several PCN&R reporters who quit the Ailes’ paper en masse to work for Stewart. “When we bought the paper we didn’t say to all the people who worked here, ‘You’re fired,’ knowing full well that there were people here who didn’t share our same way of looking at the world,” Beth Ailes told The New Yorker in 2011. The media rivalry between Stewart and Ailes split the town. Local Republican politicians all but refused to talk to Stewart’s reporters. Democrats complained that the PCN&R took shots at them.

This week, news of Stewart’s paper spread around town. On Monday afternoon, he received a phone call from Doug Cunningham, the editor of the PCN&R. “He was so wound up,” Stewart said. Cunningham wanted to know if there was a liberal conspiracy behind the paper involving the local Democratic politicians, or the Hudson Valley Land Trust, or “the Facebook guys,” referring to Chris Hughes and his partner Sean Eldridge, who own an estate in the area. Stewart told Cunningham that no one was backing the paper but himself. He said that he would come to the PCN&R’s office and sit for an interview to answer Cunningham’s questions. “Then he started yelling at me, ‘are you up to this?’” Stewart recalled Cunningham saying. Cunningham said that if Stewart did an interview with the PCN&R about his agenda, he should be ready. “If you do it, you better bring a lot of aspirin because it’s going to get rough,” Stewart recalled him saying. (When I called Cunningham to ask about the rivalry, he at first denied making the statement. When I pressed him, he said he told Stewart he would need aspirin because publishing was harder than it looked. “It wasn’t in the context of threatening poor Mr. Stewart,” Cunningham said.)

“That’s a total lie,” Stewart told me without hesitation when I gave him Cunningham’s version.

For his part, Ailes is staying out, at least publicly. He said in a recent speech that he transferred ownership of the paper to his wife. “She’s the publisher,” Ailes declared. “We have a staff up there that puts the paper together. I don’t run it, I don’t own it, and I don’t even read it until Saturday … I’m busy doing my daytime job.” At the July 4 parade this year, it will be Stewart’s paper and website, not the PCN&R, that sponsors the parade and fireworks.

And despite the increasing competition, the Aileses don’t seem to be worried about keeping subscribers. This week, I learned that my PCN&R subscription had been canceled. When I called the paper to ask about it, Cunningham told me that because of my pending book on Roger Ailes and Fox News, “we don’t desire to have a relationship with you.”

THE FEED
19 mins ago
what we know
what we know
Hurricane Ian Nears Another Landfall in South Carolina
By Intelligencer Staff
Georgia and the Carolinas are under states of emergency in preparation, while Florida struggles to recover.
23 mins ago
politics
politics
New Yorkers Could Get Paid to Report Illegal Parking
By Nia Prater
A proposed bill in City Council would allow people to report instances of illegal parking and receive a cut of the fine.
12:46 p.m.
tremendous content
tremendous content
Bonkers Revelations From Maggie Haberman’s Trump Book, Ranked
By Margaret Hartmann
If you want more information on Trump being weird with toilets and belittling Jared Kushner, Confidence Man has you covered.