The Supreme Court upheld the Affordable Care Act’s individual mandate today for reasons, and with reverberating effects, that will take at least the next few hours (if not days or weeks) to fully explain. But in a rush to get the news out, CNN and Fox News wrongly reported on the spot that Obamacare was ruled unconstitutional. The justices did no such thing, opting to keep the mandate as a tax, and watching the talking heads attempt to parse the specifics of the ruling in real time was some of the most confusing live television imaginable. The mix-up occurred online, too, at sites like CNN.com and Drudge Report, where “Struck Down” and “Mandate Gone” headlines and tweets were soon scrapped in favor of the truth. (Republican politicians were also forced to delete their messages of victory.) Today is truly a historic day: We now have a “Dewey Defeats Truman” to call our own. 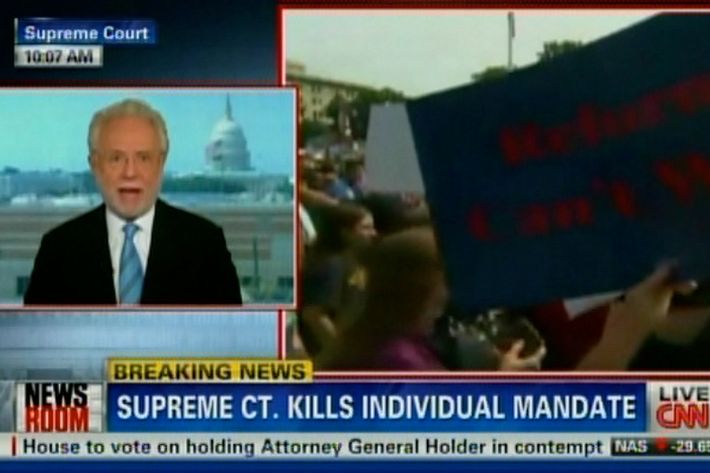 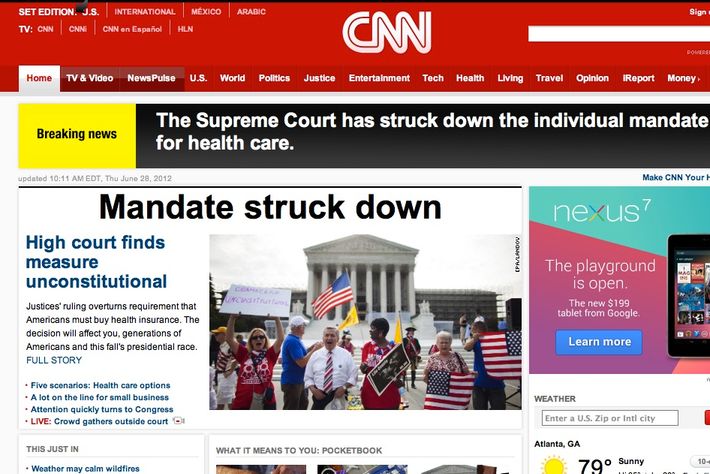 Update: CNN has apologized in a statement for its screw-up:

“In his opinion, Chief Justice Roberts initially said that the individual mandate was not a valid exercise of Congressional power under the Commerce Clause. CNN reported that fact, but then wrongly reported that therefore the court struck down the mandate as unconstitutional. However, that was not the whole of the Court’s ruling. CNN regrets that it didn’t wait to report out the full and complete opinion regarding the mandate. We made a correction within a few minutes and apologize for the error.”

Meanwhile, an anonymous CNN staffer tells Buzzfeed, “Fucking humiliating,” and adds, “We had a chance to cover it right. And some people in here don’t get what a big deal getting it wrong is. Morons.”

But an AP editor chimed in and ordered to his staff to chill with the gloating. “Please, immediately, stop taunting on social networks about CNN and others’ SCOTUS ruling mistake and the AP getting it right,” David Scott e-mailed his team, as reported by Romenesko. “That’s not the impression we want to reflect as an organization. Let our reporting take the lead.”

Fox News has issued a statement as well, but doesn’t quite own up to fumbling:

By contrast, one other cable network was unable to get their Supreme Court reporter to the camera, and said as much. Another said it was a big setback for the President. Fox reported the facts, as they came in.

Both networks managed to fool President Obama, who believed the mandate to be dead until, but remained “calm,” until he was updated with the correct info. See the on-air confusion for yourself in our video here:

THE FEED
5:47 p.m.
royals
royals
King Charles Is Ready to Trash Harry — or Declare a Truce
By Margaret Hartmann
Or Prince Harry is right about the U.K. press relentlessly peddling utter nonsense.
5:05 p.m.
tyre nichols
tyre nichols
A Sixth Officer Has Been Suspended After Tyre Nichols’s Death: Updates
By Intelligencer Staff
The officer was relieved of duty the same day the five officers charged with murder were fired for the beating.
4:17 p.m.
politics
politics
Manhattan DA Moves Closer to Charging Trump Over Stormy Daniels Hush Money
By Nia Prater
Prosecutors have begun to present evidence to a Manhattan grand jury from their inquiry into hush payments made to Stormy Daniels on behalf of Trump.

4:03 p.m.
on with kara swisher
on with kara swisher
Kara Swisher on Mark Zuckerberg’s Never-ending Trump Problem
By Intelligencer Staff
In this episode of On With Kara Swisher, Kara reflects on more than 15 years of covering Facebook and why bringing back Trump is a lose-lose.
3:35 p.m.
ftx fallout
ftx fallout
The FTX Investigations Are Getting Messy
By Matt Stieb
Prosecutors say SBF may have engaged in witness tampering. Meanwhile, Caroline Ellison and others aren’t cooperating in the bankruptcy case.
1:54 p.m.
early and often
early and often
Trump Won’t Go Away Unless a Republican Actually Beats Him
By Ed Kilgore
The 2024 invisible primary is well underway, and Donald Trump is winning it, wishful thinking aside.
1:39 p.m.
sports
sports
The Empire State Building Should Stop Doing This
By Benjamin Hart
Commemorating a sports rival’s victory is uncouth and unnecessary.
10:43 a.m.
politics
politics
Tyre Nichols’s Parents Will Attend Biden’s State of the Union
By Nia Prater
The Congressional Black Caucus extended the invitation.
10:00 a.m.
screen time
screen time
Why Does It Feel Like Amazon Is Making Itself Worse?
By John Herrman
The “everything store” has gotten junkier and more chaotic. But, for the company, it’s only good business.
8:00 a.m.
the inside game
the inside game
Joe Biden’s Big Lesson From the Last Debt-Ceiling Fight
By Gabriel Debenedetti
And why this time is totally different from 2011. Hopefully.
1/29/2023
early and often
early and often
Trump’s First 2024 Pitch: It’s Me or World War III
By Chas Danner
The former president had some things to say at his first two official campaign events over the weekend.
1/29/2023
talking about the weather
talking about the weather
This Is a Snow Lover’s Nightmare
By Benjamin Hart
New York has broken a snowless record — and there’s no end in sight to this gray misery.
1/29/2023
2024 vision
2024 vision
2024 Looks Very Dark for Senate Democrats
By Ed Kilgore
Or why the party really, really needs Joe Manchin.
1/28/2023
the system
the system
Tyre Nichols and the End of Police Reform
By Zak Cheney-Rice
His death is evidence that cosmetic change can’t excise the rot of American law enforcement.
1/28/2023
fear vs. fun
fear vs. fun
Phone, Keys, Wallet, Test Strip
By Kyra Breslin
Checking for fentanyl is becoming a necessary ritual of nightlife.
1/27/2023
early and often
early and often
Republicans Want Surrender, Not a Deal, on the Debt Ceiling
By Ed Kilgore
There can be no “bipartisan” solution to the debt-ceiling crisis when one party refuses to talk about the revenue side of the ledger.
1/27/2023
the talented mr. santos
the talented mr. santos
George Santos Commemorates Holocaust After Lying About It
By Nia Prater
The U.S. representative, who doesn’t actually have Jewish heritage but may have made antisemitic remarks, gave a speech on Holocaust Remembrance Day.
1/27/2023
early and often
early and often
McDaniel Hangs Onto RNC Gavel Despite DeSantis Defection
By Ed Kilgore
Harmeet Dhillon threw a scare into the chair of the RNC, but even late support from DeSantis didn’t convince party voters away from backing McDaniel.
1/27/2023
early and often
early and often
Judge Orders Release of Video Showing Attack on Paul Pelosi
By Matt Stieb
The body-cam footage of the responding officer shows Pelosi and assailant David DePape struggling over a hammer before the assault.
1/27/2023
early and often
early and often
Republicans Are Already Burying Their Kooky National Sales-Tax Plan
By Ed Kilgore
McCarthy promised a floor vote on the Fair Tax, which would create a 30 percent national sales tax and abolish the IRS. Now, it may die in committee.
1/27/2023
the talented mr. santos
the talented mr. santos
Here’s Every Single Lie Told by George Santos
By Matt Stieb
Navigating the many exaggerations and falsehoods of New York’s newest representative.
1/27/2023
the national interest
the national interest
The Durham Probe Was Barr’s Witch Hunt
By Jonathan Chait
A shockingly unethical crusade to vindicate Trump.
1/27/2023
just asking questions
just asking questions
How an 18-Year-Old Got His Crossword Puzzle Into the Sunday Times
By Benjamin Hart
High-school senior Garrett Chalfin on winning over the editors — and the jocks at summer camp — with wordplay.
1/27/2023
guns
guns
Coming Soon to Stores: The AR-15 for Kids
By Matt Stieb
Next month, an assault-style rifle could wind up in the hands of children unless regulators step in.
1/27/2023
early and often
early and often
The Data-Driven Strategy Behind Democrats’ State-Level Success in 2022
By Eric Levitz
The president’s party almost always loses state-level power in midterm elections. Here’s how Democrats bucked that trend last year.