Don’t believe him. This guy has a job as a stock photo model. Photo: viki2win/iStock

As noted earlier, today’s non-farm payrolls report, which showed a scant 69,000 new jobs in May and a rise in unemployment to 8.2 percent, was a miserable failure on almost all counts.

Politically and economically, of course, the weaker-than-expected jobs report is a mess. The Times focused on the political impact of the disappointing report, calling it “confirmation that the economic recovery has once again lost momentum,” while Felix Salmon notes that the Obama administration is “bizarrely reluctant” to consider stimulative measures to reverse the slide.

But if you’re not a CNBC pundit or a Beltway gabber, the most depressing thing in the report has to be that 300,000 net people joined the ranks of the long-term unemployed, the people who haven’t had jobs for at least 27 weeks. These people, who tend to be less employable than the recently unemployed, now make up 43 percent of the overall unemployed population.

Bloomberg Businessweek has a moving cover package this week on their plight. Through a series of vignettes featuring people who have been out of work for at least seven months, the magazine manages to put a human face on what, through the refractive lens of economists, can seem like a dry statistical blip.

Unemployment is not chiefly an economic problem, of course. It’s a social one. The long-term unemployed, Businessweek says, deal with “feelings of uselessness, the disturbing ease with which one’s professional identity slips away, the humiliation of asking family or friends for a loan, and, finally, the rewards of adaptability and persistence.” 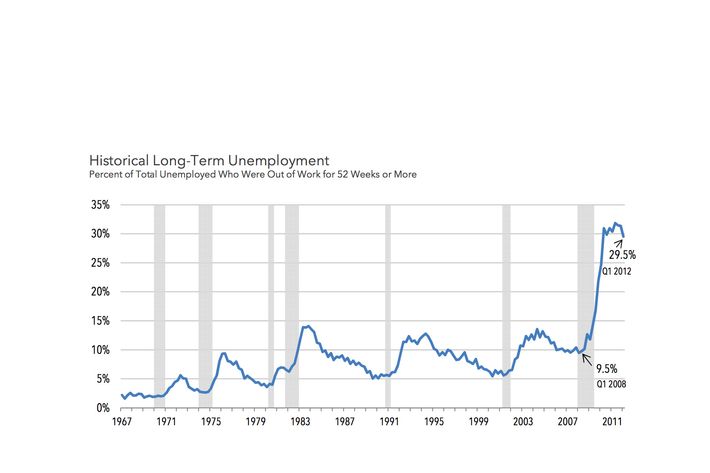 In a report earlier this month, Pew (which supplied the above chart) ran down a cursory list of the reasons we should care about long-term unemployment:

[P]ersistently high long-term unemployment has significant implications for families, government budgets, and the country’s overall economic and social health. The longer workers remain unemployed, the more likely they may lose skills and professional contacts, making workforce reentry even more challenging. Skill erosion may lead to lower future income for individuals and, for the economy as a whole, lower productivity and lost output.

Today, the Journal pointed out “one small glimmer of hope” in the otherwise horrendous job report: an uptick in the size of the labor force participation rate from 63.6 percent to 63.8 percent, which may reflect a higher number of people seeking jobs.

For their sakes, let’s hope the long-term unemployed find them first.