Today, as you may have heard, is the iPhone’s fifth birthday. Five years ago today, eager fanboys lined up for miles outside of Apple stores, fawning and frothing and damn near trampling each other in order to get their hands on the product Steve Jobs promised was “revolutionary.” Since then, the iPhone has become a behemoth, a $100 billion annual revenue generator that has made Apple the world’s largest and most profitable tech company and enlisted hundreds of millions of people in the smartphone army.

It has also, quite possibly, ruined all of our lives.

Henry Blodget is crowing about the iPhone on its anniversary, calling it “the most radically successful and disruptive product in history.” He means “disruptive” in the way Silicon Valley types use it to describe anything that is cool and innovative, but he could just as easily be describing the innumerable ways in which the iPhone has distorted, disabled, and otherwise blown a Grand Canyon–size hole in our social fabric.

I’ve owned an iPhone since 2008, and, as with most owners, it has become a fifth limb. I am one of those hollow souls whose insular cortex lights up like fireworks every time I get a new e-mail or text, whose anxiety levels spike every time my battery dips below 15 percent. Everywhere I’ve gone in the past four years, my iPhone has tugged me away from the real world. I’ve spent vacations with my eyes on Instagram, played Words With Friends during movies, and treated my Twitter feed with the deference usually reserved for royalty.

I am, in short, an iPhone addict. And so, very likely, are you.

Here’s the chart Blodget used to describe the iPhone’s impact:

And here are some other, also true charts I made: 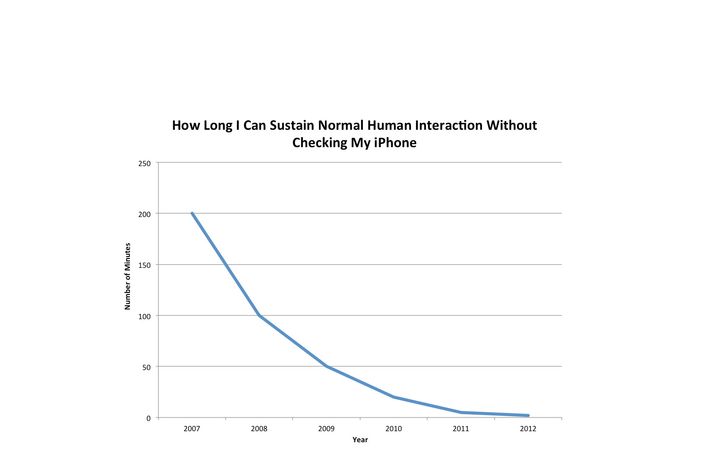 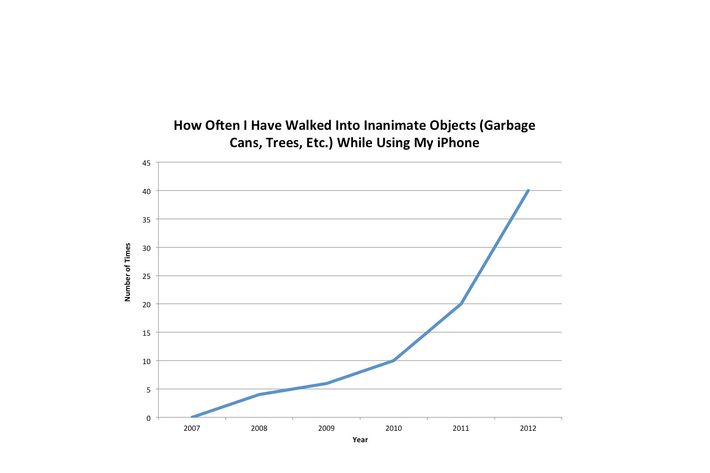 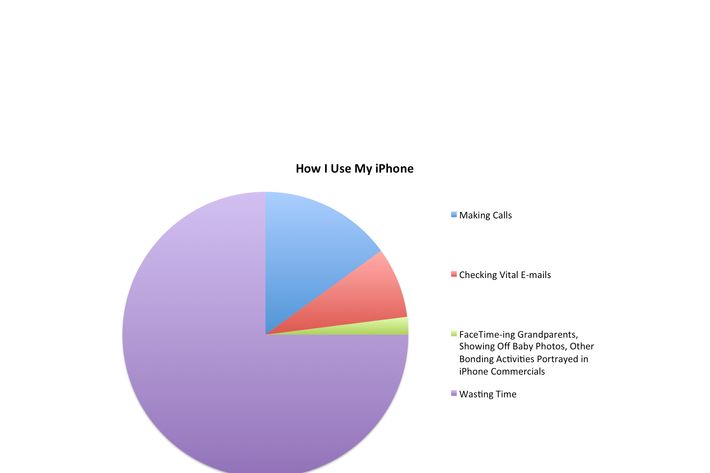 It’s true that the iPhone is a wonderful and unique device, one that deserves to make billions upon billions of dollars for Apple. It’s also true that it has turned my social circle from a group of reasonable human beings — ones who read books, had long, meaningful conversations, and were occasionally filled with the milk of human kindness — into a bunch of panicky, overstimulated, screen-fixated automatons.

Reasonable people have argued against the iPhone on economic and political grounds. It has permanently enshrined Apple’s supply chain model (read: Foxconn) in the consumer tech economy, and the massive profits it has generated have enabled one of the most lucrative corporate tax-avoidance strategies in history.

But there are more than enough purely social reasons to mourn its existence.

Just today, a friend sent out a party invitation that came with instructions for attendees: “Don’t be afraid to use airplane mode or even turn your damn phone off and interact like a human being.”

How sad is that? I’ll answer that: It’s pathetic. But it’s true that without warnings about smartphone use, and without relying on invented games like “phone stack” (in which everyone sitting at a dinner puts their phones in the middle of the table — first one to touch the stack picks up the check), our parties, dinners, and social gatherings are nothing more than a mass of inveterate touchscreen junkies all struggling not to tune each other out. We are helpless, humanist rowboats navigating the iPhone’s incessant dopamine waves.

I love my iPhone. It has, it must be said, brought goodness to my life. It has saved me at work, helped me navigate foreign cities, and kept me busy during boring meetings and subway rides. (It has also gotten me into arguments with friends, required at least ten Genius Bar trips, and been stolen out of my hand on the streets of Brooklyn.)

But is the iPhone’s technological prowess enough to compensate for the social disaster it has enabled? Has it made us happier, more productive, and more creative, like Steve Jobs seemed to promise back in 2007? If Leonardo da Vinci had had an iPhone, would his biggest accomplishment have been unlocking all six Temple Run characters?

Yes, there are other phones. Androids and the few thousand BlackBerrys left in circulation share some of the blame. But the iPhone, as the dominant device in the demographic that is responsible for the bulk of the planet’s creative output, is the most culpable of all. Its destructiveness is potentiated by its ubiquity.

So, when you’re celebrating the iPhone’s fifth birthday, take a moment and look at yours. It’s a beautiful succubus, crafted out of four and nine-tenths ounces of stainless steel and aluminosilicate glass, brilliantly marketed and viciously efficient in monopolizing your attention. But it is no substitute for life itself.

Put it down, go outside, and take a damn walk.

THE FEED
25 mins ago
fear vs. fun
fear vs. fun
Phone, Keys, Wallet, Test Strip
By Kyra Breslin
Checking for fentanyl is becoming a necessary ritual of nightlife.
8:14 a.m.
what we know
what we know
Videos Show Police Brutally Beating Tyre Nichols: Updates
By Chas Danner
In the horrifying footage released Friday by Memphis authorities, officers can be seen delivering numerous blows to Nichols’s head.
1/27/2023
early and often
early and often
Republicans Want Surrender, Not a Deal, on the Debt Ceiling
By Ed Kilgore
There can be no “bipartisan” solution to the debt-ceiling crisis when one party refuses to talk about the revenue side of the ledger.

1/27/2023
the talented mr. santos
the talented mr. santos
George Santos Commemorates Holocaust After Lying About It
By Nia Prater
The U.S. representative, who doesn’t actually have Jewish heritage but may have made antisemitic remarks, gave a speech on Holocaust Remembrance Day.
1/27/2023
early and often
early and often
McDaniel Hangs Onto RNC Gavel Despite DeSantis Defection
By Ed Kilgore
Harmeet Dhillon threw a scare into the chair of the RNC, but even late support from DeSantis didn’t convince party voters away from backing McDaniel.
1/27/2023
early and often
early and often
Judge Orders Release of Video Showing Attack on Paul Pelosi
By Matt Stieb
The body-cam footage of the responding officer shows Pelosi and assailant David DePape struggling over a hammer before the assault.
1/27/2023
early and often
early and often
Republicans Are Already Burying Their Kooky National Sales-Tax Plan
By Ed Kilgore
McCarthy promised a floor vote on the Fair Tax, which would create a 30 percent national sales tax and abolish the IRS. Now, it may die in committee.
1/27/2023
the talented mr. santos
the talented mr. santos
Here’s Every Single Lie Told by George Santos
By Matt Stieb
Navigating the many exaggerations and falsehoods of New York’s newest representative.
1/27/2023
the national interest
the national interest
The Durham Probe Was Barr’s Witch Hunt
By Jonathan Chait
A shockingly unethical crusade to vindicate Trump.
1/27/2023
just asking questions
just asking questions
How an 18-Year-Old Got His Crossword Puzzle Into the Sunday Times
By Benjamin Hart
High-school senior Garrett Chalfin on winning over the editors — and the jocks at summer camp — with wordplay.
1/27/2023
guns
guns
Coming Soon to Stores: The AR-15 for Kids
By Matt Stieb
Next month, an assault-style rifle could wind up in the hands of children unless regulators step in.
1/27/2023
early and often
early and often
The Data-Driven Strategy Behind Democrats’ State-Level Success in 2022
By Eric Levitz
The president’s party almost always loses state-level power in midterm elections. Here’s how Democrats bucked that trend last year.
1/26/2023
early and often
early and often
Brian Kemp for President Makes a Lot of Sense
By Ed Kilgore
Georgia’s governor doesn’t have the warmest personality. But in trouncing both Donald Trump and Stacey Abrams, he showed world-class political chops.
1/26/2023
master of the garden
master of the garden
James Dolan on Blacklisting His Enemies: I Have Rights, Too
By Matt Stieb
The MSG owner defended his use of facial recognition to ban lawyers who have sued him in a highly entertaining local-TV rant.
1/26/2023
screen time
screen time
How Much Does Unbanning Trump Really Matter?
By John Herrman
On the internet, you can never really go back home.
1/26/2023
2024 senate races
2024 senate races
Adam Schiff Runs for Senate on the Enemies He’s Made
By Ed Kilgore
Trump and Republicans inadvertently elevated a mild-mannered moderate who is taking his shot at Dianne Feinstein’s seat.
1/26/2023
just asking questions
just asking questions
Why the College Rankings Are Getting Less and Less Relevant
By Benjamin Hart
Former college president and longtime rankings critic Colin Diver on U.S. News & World Report’s moment of reckoning.
1/26/2023
the national interest
the national interest
Ron DeSantis’s Long War on Black Political Power
By Jonathan Chait
It’s not just a “culture war” — it’s about political representation.
1/26/2023
chinese democracy
chinese democracy
The Radical, Lonely, Suddenly Shocking Life of Wang Juntao
By Christopher Beam
After half a century of resisting the Chinese Communist Party, a dissident confronts murder and espionage in Queens.
1/25/2023
early and often
early and often
Marjorie Taylor Greene’s Desperate Plan to Be Trump’s Vice-President
By Ed Kilgore
MTG just got her first committee assignments and can’t control her mouth, but she might be on Trump’s shortlist. He’d be nuts to pick her.
1/25/2023
tremendous content
tremendous content
Why Jeff Bezos and Lauren Sánchez Are Relationship Goals
By Margaret Hartmann
Think they’re just disgustingly wealthy? Think again! Sánchez’s ‘Wall Street Journal’ Q&A reveals they’re hardworking, humble, and totally adorable!
1/25/2023
early and often
early and often
Trump’s Terrified 2024 Rivals Show It’s His Race to Lose
By Ed Kilgore
Republicans’ reluctance to enter the presidential race is telling, and the longer they wait, the more likely Trump’s renomination becomes.
1/25/2023
wyd
wyd
Trump Has Reportedly Discovered the Modern Magic of Texting
By Matt Stieb
Welcome to 2023, sir.
1/25/2023
sports
sports
Something’s Still Not Quite Right at the Baseball Hall of Fame
By Ben Jacobs
Barry Bonds and Roger Clemens are finally off the ballot, but the steroid era’s influence lingers.
1/25/2023
war in ukraine
war in ukraine
U.S. Tanks Are on Their Way to Fight Russians in Ukraine
By Matt Stieb
It may be Washington’s biggest escalation, though Biden downplayed the move.