It’s a good thing you didn’t drop $40,000 on a seat at Sarah Jessica Parker’s fund-raiser for President Obama because the event was disappointingly refined. For that kind of money, the 50 guests should have been treated to scenes of co-host Anna Wintour dressing down the cleaning lady for her improper Swiffering technique, but the biggest news to come out of the party is that the president inflated the attendees’ already-bursting egos a bit more. “You’re the tie-breaker,” he said. “You’re the ultimate arbiter of which direction this country goes.” (Also, Matthew Broderick skipped the presidential fund-raiser that took place in his own house because he’s starring in the show Nice Work If You Can Get It. Presumably, we’ll learn all about the ensuing spousal showdown in this week’s In Touch.)

Outside, it was a different story.

Hilary Reinsberg reported on Twitter, “Total insanity in the West Village outside SJP’s house.” Crowds gathered behind barricades to catch a glimpse of the president, and several streets were shut down by the NYPD and Secret Service. Tragically, many of Parker’s neighbors were horribly put out by the leader of the free world dining on their block. They vented their frustrations on Twitter:

@tracy_eff: My evening: The President’s presence at SJP’s in the W Village has prevented us from being able to get into shul, thus cancelling our party.

@nycmarcopolo: Trying to find a bottle of wine in the West Village, but the President is blocking traffic.

Others complained that they were kept out of their apartments, blocked from going up on their roofs, and “literally barricaded” on a West Village block. Also, it seems Parker committed a major faux pas by snubbing a celebrity neighbor. Saturday Night Live’s John Mulaney wrote:

Just heard that my street is closed because Obama is having dinner with Sarah Jessica Parker. hahahahahahaha. what a stupid world.

The event even drew a small group of protesters, who made a noble attempt at Anna Wintour–related political commentary.

Sadly for the “Devil Wears Prada and Supports Obama” guy, the award for best pun of the night went to Fox News’s “Checks and the City” headline.

Many residents were more welcoming, and some even thanked President Obama for giving their NYC hovel an air of sophistication.

@canadashanf: SJP my neighbor is hosting fund raiser for the Obamas.Secret Service helicopters everywhere & LOUD!Meh small price to pay to keep Romney out

@curtisjbrewer: Cab driver says he can’t drop me at my apt because POTUS is at SJP fundraiser nearby. Almost makes me forget I live in a glorified closet…

It seems the “insanity” in the streets had died down by the time the presidential motorcade actually made its way through the West Village, allowing crowds to greet the president with a friendly cheer. You can relive the excitement of watching Obama’s limo slowly roll by in this video:

For some, the ordeal was worth it, even if they were forced to spend a warm summer evening standing on the sidewalk with friends and family. @rahrah300 wasn’t allowed to schmooze with Meryl Streep, Michael Kors, and Andy Cohen, but did manage to snap this highly coveted blurry photo of the president: 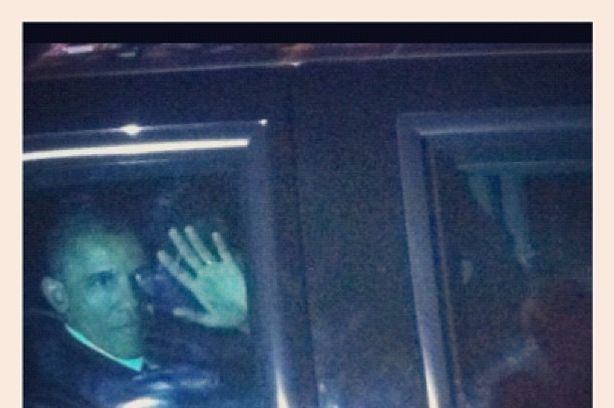