As the world chewed its nails and waited anxiously for a Supreme Court ruling on the Affordable Care Act today, the justices instead handed down a mixed decision on Arizona’s controversial immigration law, striking down three parts of the Support Our Law Enforcement and Safe Neighborhoods Act, known as SB 1070, and allowing a fourth provision to continue for now. The “show me your papers” part of the law, which requires law enforcement officers to check the immigration status of anyone they’ve stopped for other offenses, will continue, but may be subject to future legal challenges.

The court struck down these provisions: requiring all immigrants to obtain or carry immigration registration papers, making it a state criminal offense for an illegal immigrant to seek work or hold a job and allowing police to arrest suspected illegal immigrants without warrants.

Justice Antonin Scalia, who believed all four portions should have been upheld, wrote in his dissent that striking down the law “deprives States of what most would consider the defining characteristic of sovereignty: the power to exclude from the sovereign’s territory people who have no right to be there.”

He also addressed President Obama’s executive decision to no longer deport young undocumented immigrants, though it had no direct bearing on the case: “The President said at a news conference that the new program is ‘the right thing to do’ in light of Congress’s failure to pass the Administration’s proposed revision of the Immigration Act.7. Perhaps it is, though Arizona may not think so. But to say, as the Court does, that Arizona contradicts federal law by enforcing applications of the Immigration Act that the President declines to enforce boggles the mind.”

With eyes on the Hispanic vote in the upcoming presidential election, both sides are already working to spin the split decision in their favor. In the instant cable news reactions, only Fox News said the law was upheld: 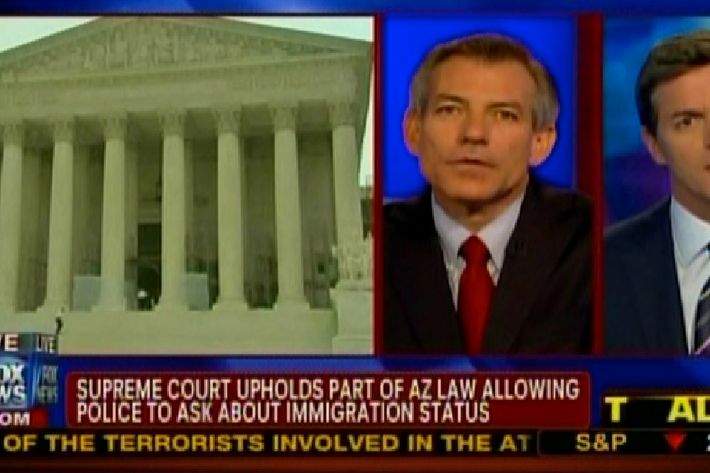 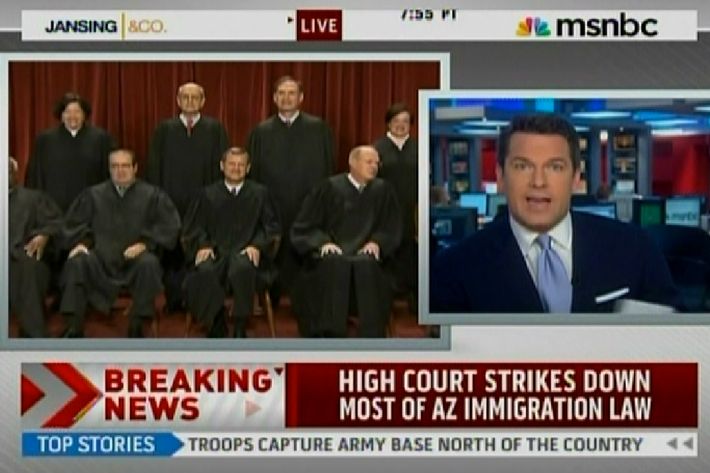 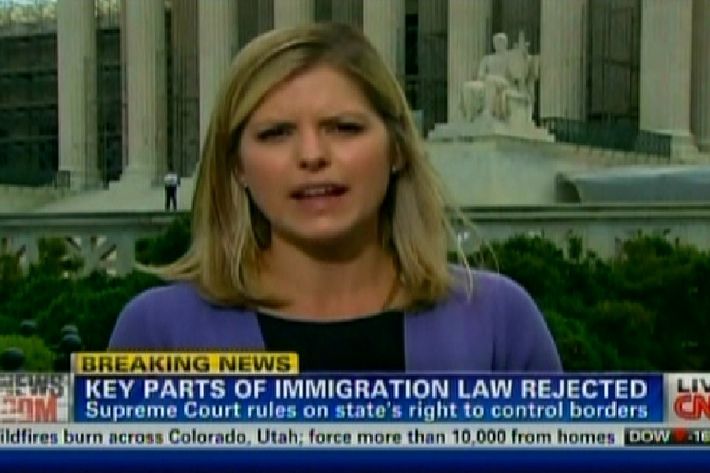 Tom Goldstein of SCOTUS Blog called the decision “a significant win for the Obama Administration. It got almost everything it wanted.” Mitt Romney, who’s conveniently campaigning today in Arizona, will almost certainly have a different take.

Update: Arizona Governor Jan Brewer issued a statement calling the ruling “a victory for the rule of law” and declaring “the heart of SB 1070 can now be implemented in accordance with the U.S. Constitution.”

Update II: Arizona Sheriff Joe Arpaio insisted after the ruling, “We did not racial profile.”

Update III: Romney, who previously called the Arizona law a “model” for the rest of the U.S., has released the following statement, opting to tread very lightly:

“Today’s decision underscores the need for a President who will lead on this critical issue and work in a bipartisan fashion to pursue a national immigration strategy. President Obama has failed to provide any leadership on immigration. This represents yet another broken promise by this President. I believe that each state has the duty–and the right–to secure our borders and preserve the rule of law, particularly when the federal government has failed to meet its responsibilities. As Candidate Obama, he promised to present an immigration plan during his first year in office. But 4 years later, we are still waiting.”

12/4/2022
vision 2024
vision 2024
Joe Biden’s Actually Not-at-All-Bad Year
By Ed Kilgore
2022 could have gone so much worse for Biden. 2024 — and all the steps he must take to show he’s still electable — looms next.
12/4/2022
early and often
early and often
Trump Admits the U.S. Constitution Is Against Him
By Chas Danner
The former president wants to terminate the parts that prevent him from overturning his 2020 election loss.
12/3/2022
games
games
The U.S. Team Can Hold Their Heads High
By Will Leitch
Losing to the Netherlands was deeply frustrating, but the Americans’ best days are ahead of them.
12/3/2022
screen time
screen time
The Machine Will Speak With You Now
By John Herrman
DALL-E’s fun, impressive, and somewhat unsettling chatbot sibling is open to the public.
12/3/2022
early and often
early and often
Why Democrats Upended Their Primary Calendar
By Ed Kilgore
The old Iowa–New Hampshire duopoly is history.
12/3/2022
encounter
encounter
Roger Bennett Is U.S. Soccer’s Biggest Fan
By Matt Stieb
He may speak with an English accent, but he has distinctly American ingenuity.
12/2/2022
games
games
The U.S. Can Absolutely Beat the Netherlands on Saturday
By Will Leitch
Your guide to this weekend’s very big, very winnable game.
12/2/2022
the money game
the money game
Sam Bankman-Fried May Regret Throwing Caroline Ellison Under the Bus
By Kevin T. Dugan
The former FTX CEO cracked on his apology tour and may have handed prosecutors a gift.
12/2/2022
stop the presses
stop the presses
The New York Times Newsroom Gets Ready to Walk Out
By Shawn McCreesh
It’s a frosty winter for the media business.
12/2/2022
the national interest
the national interest
Kanye’s Willing Republican Partners
By Jonathan Chait
First they ignore the extremists. Then they quietly accept them.
12/2/2022
politics
politics
Not Even Alex Jones Can Help Kanye West
By Nia Prater
The Infowars host kept trying to let him denounce Nazis, but he doubled down on his admiration of Hitler.
12/2/2022
the group portrait
the group portrait
Elon Musk’s Former Employees Pour One Out for Twitter
By James D. Walsh
In New York, they gathered at a favorite post-work bar. They commiserated, gossiped, swapped numbers, and promised to keep in touch.
12/2/2022
the law
the law
Why Hasn’t Sam Bankman-Fried Been Arrested Yet?
By Ankush Khardori
Bernie Madoff was arrested in a matter of days after his fraud came to light, but SBF is still a free man. What gives?
12/1/2022
mar-a-lago raid
mar-a-lago raid
Appeals Court Smacks Down Judge Who Ruled for Trump Over FBI
By Chas Danner
The 11th Circuit Court of Appeals excoriated U.S. District Judge Aileen M. Cannon’s interference in the Mar-a-Lago raid investigation.
12/1/2022
2022 midterms
2022 midterms
Why Did Democrats Get the Late Breaks in the Midterms?
By Ed Kilgore
A lot of the shock and awe over the midterm results was the product of an expectation of a late Republican surge that didn’t happen.
12/1/2022
2022 midterms
2022 midterms
Another Former Lover Accuses Herschel Walker of Misconduct
By Ed Kilgore
Many women have painted a portrait of Walker as an unstable and violence-prone man possibly suffering from untreated mental illness.
12/1/2022
early and often
early and often
Democrats Should Worry About Signs of Lower Black Turnout
By Ed Kilgore
Even in states where Black candidates headed up Democratic tickets, turnout was down. Democrats need to figure out why that happened.
12/1/2022
the money game
the money game
Why The Economy Is Starting To Feel Good All Of A Sudden
By Kevin T. Dugan
The Federal Reserve looks ready to ease up on throttling the economy. Have we averted disaster?
12/1/2022
sbf: the virtue was the con
sbf: the virtue was the con
What Does Sam Bankman-Fried Have to Say for Himself?
By Jen Wieczner
An interview with the disgraced CEO.
11/30/2022
early and often
early and often
The Many Ways MAGA Republicans Threaten Kevin McCarthy
By Ed Kilgore
The House Freedom Caucus and its MAGA allies want power over their party’s House caucus. But above all, they want scorched earth between the parties.
11/30/2022
royal family
royal family
It’s Another Chapter of Racism and the Royal Family
By Benjamin Hart
A royal aide allegedly asked a British guest at Buckingham Palace what part of Africa she was from.
11/30/2022
early and often
early and often
Trump Was Tricked Into Dining With Too Many Antisemites
By Margaret Hartmann
The poor guy didn’t know about Nick Fuentes, he just wanted to hang with Kanye West — who repeatedly attacked his Jewish son-in-law, Jared Kushner.