Step away from the plaid. Photo: iStockphoto

Yesterday, we told you where to live. Today, new Wall Street Intern, let’s have a chat.

The world you’re about to enter is, by and large, a meritocracy. With rare exceptions (nepotism, mostly), bankers, traders, and other financial services employees are judged on results — on how much business they bring in, what their P&L looks like, how many clients request them.

Over and over again on Wall Street, you will hear the phrase “we eat what we kill” — partly because saying it makes ex-athletes who spend twenty hours a day in Aeron chairs feel manly, and partly because it’s true. People on Wall Street are driven by data and rational to a fault. Especially in lean times, when banks are cutting staff and giving zero bonuses, there is no reason to keep around a highly paid banker who isn’t pulling his or her weight.

That said, there are some basic cultural signifiers on Wall Street that are more or less non-negotiable, the adoption or neglect of which will either speed your ascent within the industry or doom you to a career of bottom-bucket bonuses and “support work.”

One of those is fashion. What you wear to your summer analyst job — and how you wear it — will affect your chances of getting a full-time offer more than any “human capital manager” (Wall Street’s term for an HR person) would admit.

So, a few basic rules to help you prep your closet:

No black clothing: You bought a black Kenneth Cole suit for your high school prom, and wore it to your internship interviews. It’s a really nice suit — I get it. However, wearing it on Wall Street will not end well. You’ll get nicknamed “the funeral director.” People will ask where your partner Tommy Lee Jones is.

“A guy in our class wore a black suit,” a former bank intern told Intel. “We would all ask him, ‘Hey, buddy, can you pull the car around?’”

Don’t be that guy. Black shirts? Also a no-no.

Leave the square-toed shoes at home: Better yet, throw them away. Of the half-dozen former bank interns Intel consulted in putting this list together, all agreed that square-toed shoes are the most damning fashion item around. “They scream ‘back-office,’” one said.

Judgmental? As hell. But you can’t afford to get dinged because your Bacco Buccis from DSW were a little too rectangular.

Dress for your grandma: This tip is directed mainly at the women, for whom even the act of offering career fashion advice carries all sorts of problematic ideological baggage that we can’t even begin to unpack. All we’ll say is this: In the same way no investor ever got fired for buying IBM, wearing to work the same clothes you’d wear to your grandmother’s retirement home will never hurt your career. You know — high-cut, conservative clothing in neutral colors and all that.

We know we sound like your mom, but trust us here: The red spaghetti straps just aren’t worth it. Even if you look dowdy, you’ll still be able to hook up with your summer analyst classmates. That’s what vodka tonics are for!

Cut your damn hair: Again, your mom! (Seriously, even having to write this section is a real bummer — next we’ll be sending you Times articles using the internal e-mail tool.)

But for real, guys, cut your damn hair. Your Taylor Kitsch–tribute shag looked great at Dartmouth and may have even helped with the ladies, but on Wall Street it will only lead to merciless mockery. Go to the barber, tell him “number three on the sides, a little length on the top,” and let him turn you into a budding capitalist.

Know your limits: Hermès ties, Ferragamo loafers, and Zegna suits are all good Wall Street wardrobe items — if you’re 45 and pulling in seven figures annually. You, Intern, are neither of those things. Here are other things that fall into the Not Yet category:

As a good rule of thumb: If Gordon Gekko wore it, you shouldn’t.

Where to shop: Several of the interns we surveyed preached the virtues of a Thomas Pink shirt, a Paul Stuart suit, and Berluti oxfords. You have a trust fund? Go for it.

But if you’d rather spend your hard-earned intern dough on worthwhile items like bath salts and bottle service, here’s what you do: Go to Brooks Brothers. Get measured. Once you know your size, get ten slim-fit iron-free dress shirts — five plain blue, five plain white. Point collar, regular cuffs. Get a two-button navy suit — we like the Fitzgerald — and a pair of black cap-toe shoes. Use the black belt you already have. Wear it every day with a rotation of five to ten ties, none of them pink or found in the “novelty” section.

A recap for visual learners: 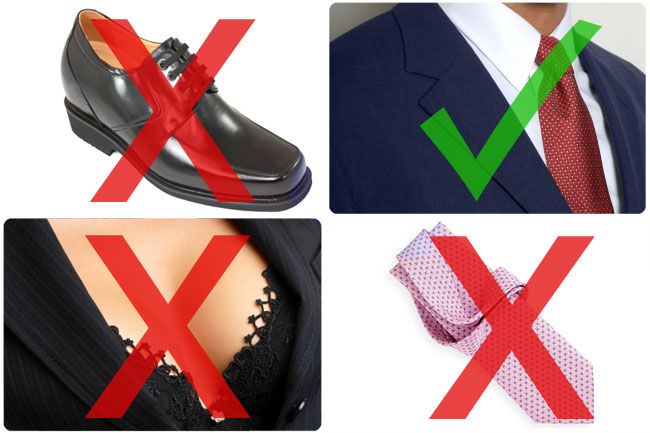 Oh, and undershirts! Crucial. Pit stains are for accountants.

Of course, even if you follow all these fashion tips, you’ll probably still get mocked this summer!

But you’ll be well-aerated and chic while you quiver in shame.

Don’t Eff This Up: The Complete Guide to Wall Street Internships

THE FEED
9:00 a.m.
the national interest
the national interest
It’s Republicans Who Won’t Negotiate Over the Budget Deficit
By Jonathan Chait
The other big lie in this hostage crisis is hiding in plain sight.
8:00 a.m.
the system
the system
The Government’s Telling Response to Tyre Nichols’s Death
By Zak Cheney-Rice
The reforms being considered would probably not have prevented his killing. But officials have gotten better at preempting outrage.
1/31/2023
creature capers
creature capers
The Hunt Is on to Find the Dallas Zoo Bandit
By Matt Stieb
Police are looking for whoever is responsible in a strange crime wave in which animals have been killed and apparently stolen from the zoo.