It’s no secret that Research in Motion, the Waterloo, Ontario–based company that makes the BlackBerry, has opened a second headquarters in Strugglesville.

The company’s stock price has done a nosedive in the last eighteen months, as has the percentage of U.S. smartphone users who choose the BlackBerry — that’s down to 8.1 percent, according to a recent Nielsen survey. RIM has been forced to lay off thousands of employees, shutter retail stores, and, in a particularly desperate move, sell one of its corporate jets. And BlackBerry 10, the operating system that was supposed to ride in on a white horse and save the company, has seen more delays than a Delta passenger.

Among tech watchers, it’s now taken as fait accompli that RIM will last another year or two, at most, before it is broken up, sold, or liquidated. But it’s worth taking a closer look at five of the company’s mistakes that have sent the BlackBerry hurtling toward the grave.

1. It had an identity crisis.

Years ago, RIM had a huge following in corporate America — legion were the lawyers, consultants, and Wall Street bankers who could not live without their BlackBerry fix. (One of the best scenes in Andrew Ross Sorkin’s Too Big to Fail was one in which a bunch of bank executives who are deciding the fate of Lehman Brothers hold a spontaneous BrickBreaker tournament.)

But at a certain point, RIM decided it wanted everyone to live in BlackBerry nation. So it made a play for the mainstream, introducing ham-handed products like a streaming music player called BBM Music that, to this day, nobody outside Waterloo has ever heard of.

For years, RIM has been seemingly divided on the question of what the BlackBerry should be — a popular device that can compete with the iPhone or a business tool aimed at the enterprise market. Even RIM’s former co-CEOs Jim Balsillie and Mike Lazaridis were split on the issue, with Balsillie reportedly favoring the mass approach and Lazaridis wanting to concentrate on corporations.

When your CEOs can’t agree on the direction of your core product, trouble usually follows.

2. It didn’t play well with others.

Harley Young makes a fairly compelling case that RIM’s biggest mistake was staying in Canada, where dealing with an “oligopolistic telecom market” distracted it from the things that really mattered (not getting trounced by the iPhone) and made it focus instead on peripheral issues like data costs.

But the broader reason RIM should have moved to the U.S. is that it might have made it more likely to team up with American tech companies. Oracle CEO Larry Ellison has already said he considered buying RIM as an inroad into the mobile business. Surely there are other tech moguls who considered doing deals at the height of the BlackBerry’s popularity but balked because of the difficulty involved in pulling off cross-border collaborations.

Farhad Manjoo thinks an eleventh-hour Microsoft partnership might save RIM in the end, but it’s almost certainly too little too late. What RIM needed years ago was to open up its products — like BBM, e-mail, and its corporate security services — to developers and platforms like Android and iOS. That would have kept BlackBerry in the American tech ecosphere and allowed it to make money from the growth of other platforms, rather than freezing all alone in Ontario.

Every tech company makes bad products. Apple had the Newton and the twentieth-anniversary Mac. Microsoft had the Zune. What good tech companies do, in situations like these, is discontinue the thing that isn’t working and move on.

You don’t double down on unpopular products — a lesson RIM hasn’t learned at all, judging from the way it has handled the PlayBook tablet rollout. Even though the PlayBook was essentially DOA (its lack of native e-mail doomed it from day one) and even though the company had to take a $485 million bath on unsold PlayBooks last year, RIM has continued to market the unpopular tablet.

RIM even set up a PlayBook marketing blitz in New York this summer. The company’s efforts to revive interest in the PlayBook included paying people $10 apiece to attend a party, hiring Questlove as a D.J., and setting up a booth in Grand Central.

Via Twitter user Vincent Veneziani, here’s what the foot traffic at the Grand Central booth looked like:

As detailed in the Journal’s extended RIM eulogy, Balsillie and Lazaridis could be almost comically inept when it came to staying ahead of market trends. (Years ago, Lazaridis was reportedly asked by an analyst if he planned to put color screens on BlackBerrys. “Do I need to read my e-mail in color?” he is said to have replied.)

So, when it came time to replace the bumbling co-CEOs, RIM could have made a flashy, attention-grabbing pick (like Yahoo did by hiring Marissa Mayer) who could have displayed appropriate frustration with the company’s stagnation, cleaned house, and given it a much-needed burst of good publicity.

Instead, it announced that the architect of its turnaround would be Thorsten Heins, a charmless German technocrat and RIM insider whose version of leadership includes saying that there is “nothing wrong” with a company whose stock has done this: 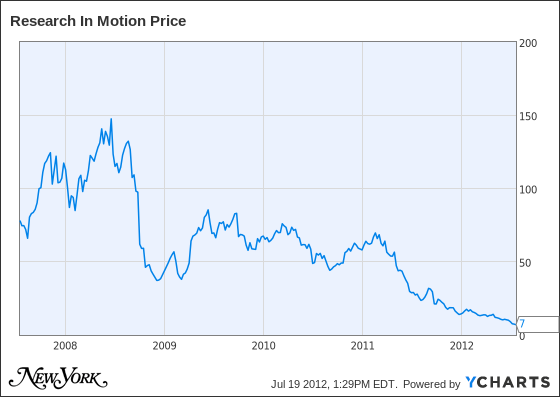 (To be fair, Heins has since backtracked from his statement.)

Last week, I went to the New York Tech Meetup, a group of programmers and tech-industry hangers-on who get together once a month to ooh and ahh over new gizmos. During an onstage demonstration, the founders of a start-up called AppGuppy announced that their product currently ran on iOS, Android, and BlackBerry.

An AppGuppy worker smiled sheepishly and said, “We’re kind of removing that now.”

The roaring laughter that followed proved that RIM has become a literal joke within the developer community, the people who make the whiz-bang apps that make our iPhones and Androids so useful. Those people could have brought the BlackBerry back by creating a panoply of essential apps for BlackBerry 10. But by giving its developers a second-rate experience, and by sapping their confidence in the company’s viability, RIM has all but sealed its fate.

What sensible programmer, after all, would build an app for an operating system that might never see the light of day?

Make no mistake: RIM still has a few arrows left in its quiver, including a pile of cash estimated at $2.2 billion and a valuable proprietary network. But cash dwindles, and networks become less valuable as other carriers catch up. The RIM subscribers (and giant corporations) who went through the hassle of switching to iPhones or Androids in the past few years aren’t coming back, even if BlackBerry 10 is the best operating system since MS-DOS.

So, let the last rites for RIM begin. Because, when you have to hire Questlove to convince people that your product is still cool, a graceful end is about the best you can wish for.

THE FEED
4:03 p.m.
politics
politics
Fifth Republican Senator Won’t Seek Reelection in 2022
By Nia Prater
Roy Blunt of Missouri will retire, leaving Democrats another open seat to try and pick off.
3:23 p.m.
feminism
feminism
For International Women’s Day, Raise the Minimum Wage
By Sarah Jones
Low wages keep women in poverty and make them vulnerable to sexual abuse.
2:00 p.m.
scandals
scandals
Everyone Who Has Called for Governor Cuomo to Resign
By Nia Prater and Matt Stieb
As the scandal over COVID policies is compounded by harassment allegations, a growing number of elected officials say he must resign or be impeached.

A hopeful picture of where we stand on Covid

7:00 a.m.
The Pandemic’s Dr. Doom Bets It All
By Melody Schreiber
9:14 a.m.
politics
politics
Prominent Democrats Call for Cuomo to Resign
By Chas Danner
As a raft of officials called for his ouster, Cuomo labeled the idea of quitting over harassment allegations “anti-Democratic.”
7:00 a.m.
covid-19
covid-19
The Pandemic’s Dr. Doom Bets It All
By Melody Schreiber
Why Michael Olsterholm staked his credibility on predicting a new wave — and delayed his own second shot to stop it.
3/7/2021
politics
politics
More Former Aides Allege Misconduct by Cuomo
By Chas Danner
Two more women have come forward publicly to describe distressing encounters with Cuomo, while other staffers say he fostered a toxic workplace.
3/7/2021
stimulus checks
stimulus checks
Will We Get a Third Round of Stimulus Checks?
By Ed Kilgore
The House will vote on Tuesday on the $1.9 trillion stimulus that passed the Senate. If all goes well, the president should sign the bill by March 14.
3/7/2021
coronavirus vaccine
coronavirus vaccine
How to Sign Up for a COVID Vaccine in New York
By Matt Stieb
Two of the state’s largest vaccination centers are operating at Medgar Evers College and York College, while the Javits Center site is running 24/7.
3/7/2021
the national interest
the national interest
Joe Manchin Says He Might Reform the Filibuster and Save American Democracy
By Jonathan Chait
Deciphering the most important policy statement of the year.
3/7/2021

This could be a big deal, opening the door to meaningful reform

Manchin on the filibuster to @MeetThePress: “If you want to make it a little bit more painful, make him stand there and talk, I’m willing to look at any way we can. But I’m not willing to take away the involvement of the minority.”
—@igorbobic
3/7/2021
politics
politics
No One Likes Marjorie Taylor Greene, But Can Anyone Stop Her?
By Ben Jacobs
Democrats and Republicans may agree on something after all.
3/6/2021
covid-19 stimulus
covid-19 stimulus
The COVID-19 Stimulus Bill Can Help Biden Transform Politics
By Ed Kilgore
Some white working-class voters just want to see that government works for them, too. The relief bill could bring them back to the Democratic Party.
3/6/2021
politics
politics
Senate Passes $1.9 Trillion COVID-Relief Package: Live Updates
By Chas Danner
After more than 24 hours of delays, the Senate finally passed the American Rescue Plan on Saturday afternoon in a 50-49 vote.
3/6/2021
gridlock
gridlock
Today’s Gridlock Is Like a 19th-Century Nightmare
By Ed Kilgore
We’re experiencing the instability and close partisan competition of the Gilded Age along with the big differences and fury of the 1850s.
3/6/2021
the national interest
the national interest
How Never Trumpers Are Becoming Pro-Democracy Republicans
By Jonathan Chait
Republicans who left the party over Trump are staying away over authoritarianism.
3/5/2021
covid-19 stimulus
covid-19 stimulus
What Will Parents Get From the COVID-19 Relief Bill?
By Ed Kilgore
Between a third stimulus check and enhanced child tax credits, low-to-moderate-income parents would get a lot of help — though it could be temporary.
3/5/2021
the national interest
the national interest
Neanderthals Were Smarter Than Anti-Mask Republicans
By Jonathan Chait
The right is angry, but Biden was probably too kind to Greg Abbott.
3/5/2021
culture war
culture war
The Right Would Rather Debate Kids’ Books Than Biden’s Bills
By Eric Levitz
As Democrats ready a major expansion of Obamacare and child welfare, GOP lawmakers are whining about Dr. Seuss and Mr. Potato Head.
3/5/2021
vaccines
vaccines
Vaccine Hesitancy Is Falling, According to a New Poll
By Paola Rosa-Aquino
The number of people who say they want a shot (or have already gotten one) has jumped way up.
3/5/2021
covid-19 stimulus
covid-19 stimulus
Senate Likely to Vote on COVID-19 Stimulus Package This Weekend
By Ed Kilgore
Democrats are already accepting changes in the bill to preempt Republican amendments, and Sanders’s minimum wage bid has already been defeated.
3/5/2021
capitol riot
capitol riot
Trump State Department Appointee Arrested Over Capitol Riot
By Nia Prater
The FBI said Federico Klein stormed the Capitol and assaulted an officer. He’s the first Trump administration member charged in the insurrection.
3/5/2021
pivot
pivot
Are Movie Theaters Completely Screwed?
By Intelligencer Staff
For an already troubled industry that has been battered by the pandemic, there may be a narrow path to survival.
3/5/2021
politics
politics
Democrats Shouldn’t Count On a ‘Morning In America Midterm’
By Ed Kilgore
Midterms are different from presidential elections, and 1984 isn’t 2022.