This week a number of conservative luminaries, ranging from Tim Tebow to Sarah Palin, were rumored to be the Republican National Convention’s surprise guest. On Thursday afternoon it was widely reported that Clint Eastwood would be the big star speaking before Romney, but that was just a diversion. Sure, Dirty Harry took the stage and delivered the worst speech anyone has ever given, but judging from the reaction to the appearance, he was mainly there to introduce the next American phenomenon: an empty chair that does a mediocre impersonation of President Obama.

It seems that people in the convention center were wild about the comedy duo’s routine, but those watching at home had a much different take. Here’s a sampling of the response on Twitter (the many remarks suggesting that Eastwood was drunk have been excluded):

I was so upset about the end of the Vandy game I hallucinated Clint Eastwood was talking trash to an empty chair at the RNC. — Willie Geist (@WillieGeist)

“If Clint Eastwood ever talks to a chair on national TV, people will need a way to reassure each other” – inventor of Twitter, March 2006 — Patton Oswalt (@pattonoswalt)

Ben Linus talked to an empty chair once, too. — Damon Lindelof (@DamonLindelof)

When Marco Rubio said “Do you think Obama’s watching tonight?” Clint Eastwood should have run out and said “He’s in that chair!” — Ben Greenman (@bengreenman)

The Daily News notes that within hours, the speech had sparked the meme known as “Eastwooding,” which involves Twitter users posting pictures of their favorite unoccupied chairs. Even the non-imaginary President Obama jumped on the trend. “This seat’s taken,” Tweeted @BarackObama, along with a photo: 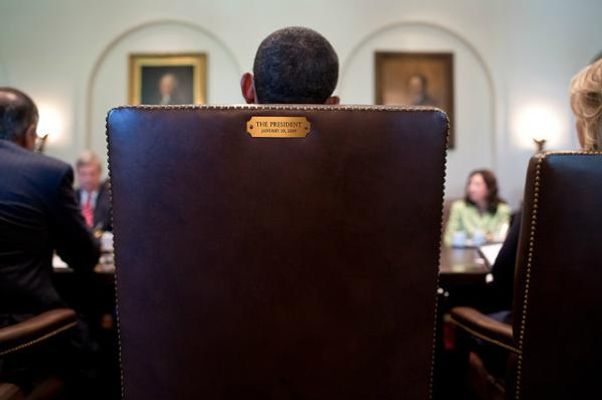 Eastwood’s reputation may have taken a hit, but between this and its interview on Piers Morgan, empty chair’s star is on the rise. Watch your back, inanimate carbon rod.