It can seem, at times, like even the most enlightened minds in New York’s financial services industry are raging mad about Dodd-Frank and the confusing regulatory regime it has ushered in.

Schwenk’s enthusiasm can be traced to the lucrative cottage industry that the company he founded, Advise Technlologies, has found in guiding hedge funds and other private investment firms through the labyrinthine process of filling out their Dodd-Frank–mandated paperwork.

The big money-maker for Schwenk’s firm these days is Form PF, a 42-page disclosure that requires large hedge funds to give up granular details about their funds’ investments. Advise’s services, which center on a customized software suite that allow clients to file Form PF online, can cost a single hedge fund up to $250,000.

The looming Form PF deadline (filings are due next Wednesday) has kept more than a few hedge fund managers off the beach this summer, and made Schwenk into something of a last-minute SAT tutor.

“A lot of these guys are freaked out,” Schwenk said. “This is the first time they’ve ever reported something this serious to the regulators. It’s crunch time, and all the kids put off their homework.”

Hedge funds have traditionally been black boxes, with not much known about their inner workings save a few quarterly SEC disclosures. That all changed with Form PF, which requires funds with more than $5 billion in gross assets to give the the government a full annual rundown of what’s on their balance sheets, and how they invest. Things like: How big is their position in gold? How much of their debt is unsecured? Who are their Eurozone counterparties? 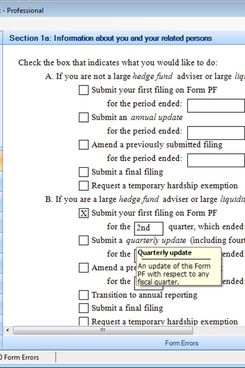 Disclosing this information is supposed to make hedge funds feel safer — regulators have claimed it will help them deter the next Bernie Madoff. Instead, the Paulsons and Dalios of the world seem to view the form, which has thousands of data inputs and can take nearly a year for a large fund to fill out, as a huge pain.

“Every day, I hear the great complaining of people who don’t want to go through the work,” says Schwenk, whose clients include roughly 120 of the 200-odd hedge funds that meet the $5 billion Form PF threshold.

Some of Wall Street’s last-minute rush to get their disclosures SEC-ready is attributable to sloth. (“There’s been a lot of comments made about the fact that this is in August and most of them are used to taking some vacation,” Schwenk says.) But in some cases, what’s taking so long is that there are slight differences between the ways hedge funds catalog their own data and the way the SEC and the CFTC, the two Wall Street regulatory bodies who view the massive disclosure statements, want those data reported.

“The CFO of a very well-known stock-picking hedge fund calls our hotline about every other day to change his mind about how he’s going to interpret three or four of the questions,” Schwenk says. “It’s complicated. You can’t just run a command in Excel.”

Adding to their frustration with labyrinthine disclosure forms, hedge funds — who will have to make their next regulatory disclosures around Thanksgiving — now have to worry that their confidential data will fall into the hands of loose-lipped government regulators.

“Even though this data’s supposed to be very confidential, and only supposed to be used inside the SEC, there’s a tremendous amount of concern on the part of hedge funds that data will somehow get out there,” Schwenk says.

There are client-centric concerns as well.

“I think a bigger threat is when investors start asking for Form PF,” Jeannie Lewis, a principal with Deloitte, told Bloomberg Businessweek.

To assuage these fears and help hedge funds meet their big deadline next Wednesday, Schwenk and his 52 employees are working around the clock until the deadline strikes.

“Monday is going to be a very popular day to file,” Schwenk says of his procrastinating hedge fund pupils. “Everyone’s holding their breath hoping the SEC’s site doesn’t crash.”