Yesterday, Paul Ryan paid a visit to his alma mater, Ohio’s University of Miami, and the media was on hand to ask the tough questions. Specifically: Where are the topless pixxx of the vice-presidential candidate? (It’s what the people want, as Google’s ever-seedy search recommendations can tell you.) Tim Sardinia, the president of Ryan’s old fraternity, Delta Tau Delta (apparently known in some circles as “Dorks That Drink”), reported that esteemed news outlet TMZ “wanted to know if I had any pictures of Paul Ryan shirtless.” Sadly, he does not. “I’m pretty sure he doesn’t go around taking pictures of himself in the mirror,” Sardinia added.

We are much, much less sure about that. Ryan is the House authority on P90X which —  for the uninformed and/or lazy —  is “an intense 90-day workout routine and nutrition plan mixing elements of body-weight training, cardio, yoga and martial arts” that he has credited with keeping his body fat hovering somewhere between 6 and 8 percent. Maybe showing off the fruits of his labor could distract the crucial female swing state demographic from his desire to dismantle their reproductive rights? (Not to mention some of his other annoying qualities.) After all, this election season has been low on Republican politicians who look good in swimsuits.

Perhaps you recall this photo of spring’s conservative darling, Rick Santorum, which was somewhat ironically snapped by a passenger on an all-gay Atlantis cruise in March.

Then there’s this shot, which — despite a spokesman’s denials — was widely interpreted to be one of Newt Gingrich basking in the sun. (If it’s not, in fact, Gingrich, then it’s a very convincing doppelgänger who happened to be vacationing in Greece at the exact time he was.)

Of course, history has shown us some exceptions. (What’s up, Theodore Roosevelt?) Ronald Reagan was pretty in-shape during his acting days, and — like Ryan — his interest in fitness did not seem to wane as his passion for supply-side economics grew.

Meanwhile, there’s Ryan’s running mate — and apparent soul twin  — Mitt Romney, whose wetsuit look is made all the more impressive by his (mostly) waterproof power hair. 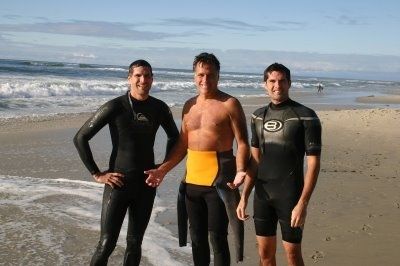 And, just for good measure, here’s the competition:

We’ll go ahead and preempt charges of reverse sexism and distracting from the real issues by encouraging Ryan to settle the matter by releasing a photo or two. Otherwise, we have to wonder what he’s hiding.

THE FEED
13 mins ago
crime
crime
Police Arrest Suspect in Killings of Muslim Men in Albuquerque
By Benjamin Hart and Nia Prater
At least three Muslim immigrants have been ambushed and killed in recent weeks, terrifying the local community.
4:25 p.m.
exhibit a
exhibit a
Making Sense of the Trump Raid
By Ankush Khardori
After a summer of intense criticism, Merrick Garland’s Justice Department takes its boldest step yet in pursuit of the former president.
4:24 p.m.
the power trip
the power trip
What’s in Trump’s Safe the FBI Raided?
By Olivia Nuzzi
Former aides consider the contents of the vault at Mar-a-Lago.

3:48 p.m.
early and often
early and often
2022 Midterms: A Guide to the Races Worth Watching
By Ed Kilgore
A cheat sheet to keep track of all the crucial races, primary upsets, and campaign drama — Trump-fueled and otherwise — from now through Election Day.
3:07 p.m.
what we know
what we know
Trump Says the FBI Raided Mar-a-Lago and Broke Into His Safe
By Intelligencer Staff
Federal agents were searching for evidence that Trump has classified information that he took home from the White House.
2:30 p.m.
mar-a-lago raid
mar-a-lago raid
Convicted Felons Are Leaping to Trump’s Defense
By Matt Stieb
Fellow politicians and operatives who also had run-ins with the Feds are claiming him as one of their own.
1:32 p.m.
the national interest
the national interest
What Is Really Unprecedented Is Trump’s Criminality
By Jonathan Chait
Republicans are angry at the FBI, but they choose to yoke themselves to a flagrant crook.
12:37 p.m.
early and often
early and often
Republicans Go to the Mattresses to Defend Trump From the Feds
By Ed Kilgore
The gestures of loyalty to Trump and fury at law enforcement by leading Republicans with no idea of the raid’s purpose or findings are revealing.
11:49 a.m.
goat
goat
Serena Williams Announces Her Retirement From Tennis
By Claire Lampen
In a Vogue essay, she says she plans to step away from the sport after the U.S. Open wraps next month.
10:00 a.m.
the city politic
the city politic
Yuh-Line Niou on Her Especially Personal Run for Congress
By Nia Prater
From representation to disability policy, she says there’s a common theme: Courage.
9:30 a.m.
games
games
The Mets Are Having an Extremely Un-Mets Season
By Will Leitch
They’re overachieving their way to the playoffs — and having a great time doing it.
9:00 a.m.
what is elon musk?
what is elon musk?
Musk and Trump and a Little Steve Jobs
By Chris Lee
The characterological origins of Tony Stark.
8:00 a.m.
what is elon musk?
what is elon musk?
Elon’s Biggest Boondoggle
By Alissa Walker
Why did the world’s richest man spend the past five years trying to sell cities a hole in the ground?
8/8/2022
unsolved mysteries
unsolved mysteries
The Bodies Keep Piling Up at Lake Mead
By Chas Danner
Four sets of human remains have now been discovered in the rapidly receding reservoir since May.
8/8/2022
early and often
early and often
Will Democrats’ Sudden Legislative Success Matter in the Midterms?
By Ed Kilgore
With the passage of the Inflation Reduction Act and gas prices dropping, Democrats’ odds of success in November’s elections are looking up.
8/8/2022
early and often
early and often
Photos of Trump Notes in Toilet Were Better Left to the Imagination
By Margaret Hartmann
Reporters were so preoccupied with whether they could find these pictures that they didn’t stop to think if they should.
8/8/2022
early and often
early and often
The GOP Is the Party of Insulin-Gouging
By Ross Barkan
In their quest for zero-sum victories — and Democratic defeats — Republicans are incapable of tackling popular issues that would benefit them.
8/8/2022
the city politic
the city politic
Carlina Rivera on What Democrats Get Wrong About Latino Voters
By Nia Prater
A daughter of the Lower East Side runs to represent the district where she grew up.
8/8/2022
early and often
early and often
Senate Democrats Finally Get Their Big Climate, Health Care, and Tax Bill Done
By Chas Danner
An overview of what’s in the Inflation Reduction Act and what last-minute changes were made.
8/8/2022
2022 midterms
2022 midterms
The GOP’s Glut of Rookie Candidates Could Mean Lots of Costly Mistakes
By Ed Kilgore
Experience in politics isn’t everything. But the GOP’s unusually large number of first-time candidates could mean midterms trouble down the road.
8/8/2022
early and often
early and often
The Biden Age Is Hitting Its Stride
By Errol Louis
The debate over how old the president is and whether he should run again is a distraction from how much he has already accomplished.
8/8/2022
what is elon musk?
what is elon musk?
What Is Elon Musk?
By Lane Brown
And how is it possible that he could emerge from his Twitter debacle more culturally dominant than ever?
8/7/2022
plagued
plagued
What Is Going on With America’s COVID Booster Plan?
By Chas Danner
The Biden administration wants to reboot the U.S. booster drive with reformulated vaccines this fall. Here’s what we know.
8/7/2022
early and often
early and often
Arizona Has Become a Paradise for Election Deniers
By Ed Kilgore
Promoters of Trump’s election fables swept four major statewide Republican primaries. The GOP could pay a price in November.
8/7/2022
early and often
early and often
All the Juicy Gossip From Jared Kushner’s Book
By Margaret Hartmann
Breaking History, the forthcoming memoir from the former First Son-in-Law/top Trump adviser, is brimming with dirt, jabs, and score settling.