For hundreds of years, various cultures around the world have practiced the art of tasseography, in which the pattern of leaves at the bottom of a tea cup (or coffee grounds on the bottom of a coffee cup) are interpreted to predict fortunes. In politics, “reading the tea leaves” refers to the quest — usually the media’s — to find clues to some significant future event. Over the coming days, many metaphorical tea leaves will be read in an effort to divine Mitt Romney’s choice of a running mate, because this is really the only thing going on in the race right now. We will track this political tasseography as it happens, for as long as it happens. Our third installment: Vision.

What Are We Scrutinizing?: Mitt Romney told goateed NBC political sage Chuck Todd yesterday that we should expect his running mate to have “a strength of character, a vision for the country, that, that adds something to the political discourse about the direction of the country.”

Why It Might Mean Something: Among the list of presumed VP hopefuls, only one person is regularly described as having a distinct “vision for the country,” and that’s Wisconsin congressman Paul Ryan, whose controversial budget plan has quickly become a core part of the GOP platform. How much more regularly is Paul Ryan described as having “vision” than other potential Romney running mates? Check out the Google search results. It wasn’t even close. 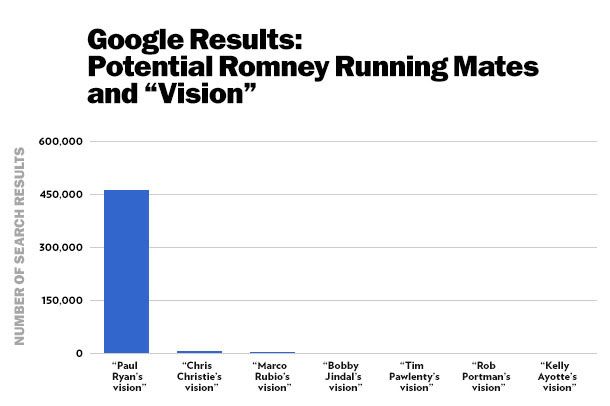 Therefore, when Mitt Romney hints that his running mate will have a “vision for the country,” one could reasonably assume that he is more likely talking about Paul Ryan than anyone else.

Why It Might Mean Nothing: Even if the running mate Romney has chosen/will choose doesn’t really have any kind of strong vision, Romney would probably pretend that he does anyway. The whole point of Romney’s campaign is to take the country in a new direction, and he’s going to frame his entire ticket in that light. He’s not going to admit that his vice-president is an empty suit selected above all for his blandness and ability to pass vetting.