Is this your home? If so, GOOD FOR YOU. Photo: David Papazian/Corbis

Confidence is one of those shifty economic buzzwords that is thrown around frequently but is hard to nail down. It’s a feeling, drawing from fuzzy emotional factors more than observable facts. Unlike “What did the Dow do today?” or “How many iPhones did Apple sell last quarter?” there are no correct answers to confidence questions.

For example: If I’m an undecided voter in Florida and an NBC/WSJ pollster calls and asks me, “During the next twelve months, do you think that the nation’s economy will get better, get worse, or stay about the same?” my answer won’t tell you exactly where the economy is going — only where I think it’s going.

Still, consumer confidence does affect consumer behavior. It’s a self-fulfilling prophecy that often, if not always, predicts the economic future. So, every month, we get a flurry of surveys and studies and articles that all purport to give us a window to our collective economic psyches and deduce from that where things are headed.

And lo and behold, it turns out that we are an increasingly confident bunch.

According to that NBC/WSJ poll, 42 percent of Americans think the economy will get better in the next year. Another survey that came out today, from the Center for Audit Quality (via Politico), asked “Main Street investors” (people with more than $10,000 in investments) how they felt, and it found largely the same: 65 percent said they were confident in U.S. capital markets, a number that reverses a years-long slide. Here’s what that looks like: 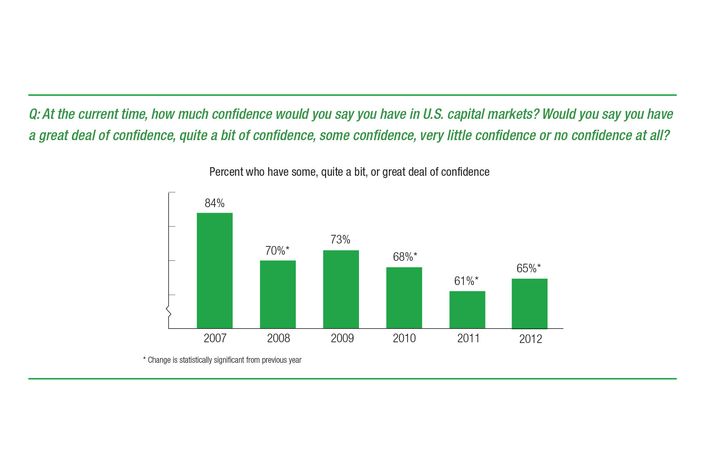 Housing numbers, which are often used as a stand-in for confidence (because people who think their jobs and savings are about to vanish generally don’t buy houses) are also up. The new-home construction rate is up nearly 30 percent from a year ago, and new-home applications are up 25 percent. The National Association of Home Builders’ “builder confidence index,” whatever that is, is at its highest level since 2006.

In fact, most of the statistics we use to approximate the idea of “confidence” are going in the right direction. We’re spending more. On Wall Street, the VIX (a so-called “fear gauge” that basically tracks how sweaty traders’ palms are) is near a five-year low. And as Felix Salmon points out, credit card debt is also going down, meaning that people are at least confident enough in next month’s wages to pay off their bills this month.

Granted, Bloomberg did report today that steakhouse revenues have fluctuated “as diners digest economic news.” (Digest? Get it? Give those guys a Comedy Central special!) But fewer people going to Capital Grille means basically nothing about the broader economic recovery, since, like, what if they just wanted fish?

So, with a pile of imperfect polls and statistics mostly pointing in the same direction, it’s relatively safe to say that four years after the near-collapse of the financial system, we’re seeing the light at the end of the tunnel — or at least we think we are. And not inconsequentially for Barack Obama, it means that the question Republicans have been asking the country (“Are you better off than you were four years ago?”) might not be producing the answers they were expecting.