Occupy Wall Street kicked off its one-year anniversary on Saturday with an afternoon of group discussions in sunny Washington Square and an evening march to Zuccotti Park. To those who have followed the movement, much was familiar: Chants of “Whose street? Our street!” and “We are the 99 percent!”; long talks about ideas and tactics conducted via the People’s Mic; and, eventually, shouts of “Shame! Shame! Shame!” directed at the dozens of NYPD officers assembled around the protest.

Familiar, too, was the much-reduced size of the protests when compared to their peak intensity last November.

In some ways, however, this rally was unique, as it took place just a few weeks after the two major parties’ national political conventions. For all their unusual methods — and despite a steadfast refusal to wade directly into electoral politics — Occupiers were, for the first time, doing their thing in the thick of a heated presidential race. On Saturday, it showed. 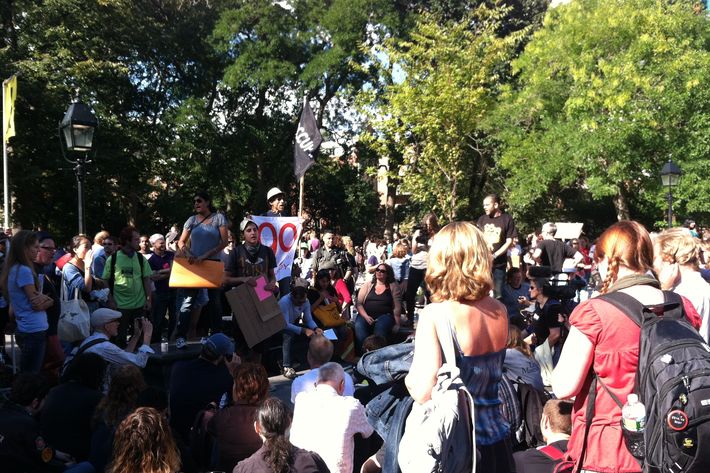 “Some of the people got stabbed in the back by Democrat infiltrators,” lamented T.J., a member of Occupy’s electoral politics working group.

He was referring to Aaron Black, a longtime Occupy organizer, who caused something of an internal firestorm when he said at the Democratic National Convention in Charlotte that occupiers didn’t really want to protest Obama.

In fact, the Charlotte Occupy protests (composed of roughly 200 people according to most news reports, though in an interview Black used the number 70, referring to those who lived in a nearby camp) appear to have been at least as large as those at the Republican convention in Tampa. Which is to say: not very large. Though it’s possible bad weather was at least partially to blame for the low turnout; after all, the hurricane forecast led Republicans to cancel their first day of events.

In any case, Black has helped sustain the movement through a rough stretch by taking a leading role in a series of targeted actions in recent months, including a surreal July visit to Mitt Romney’s fundraiser at David Koch’s house in Southampton. He represents a wing of the cause that has spawned several candidates for office and has sought ties with traditional political actors like organized labor.

“We changed the conversation,” Black said of the events of last fall, when Occupy managed to draw significant public attention toward rising income inequality.

“Are we happy with that and do we leave it at that? Or do we push for more? I think we push for more, and you really have to pay attention to the one candidate who has participated in our conversation. I’m not speaking for the movement, but a lot of occupiers support Obama.”

Many I spoke to echoed that sentiment. Others seemed to have made peace with Democratic politics and politicians, so long as they are of the unorthodox variety.

“I don’t want a Charlie Rangel, I want an Elizabeth Warren,” said Paolo Cremidies, an activist from upstate New York who described himself as a frequent presence at the protests.

(One entity Occupiers have not yet made peace with is the NYPD. By the end of the night, 18 protesters had been arrested — seemingly at random. Several regulars told me that the police seemed to be singling out Occupiers who had taken part in protests at Trinity Church near Zuccotti Park in recent months.) 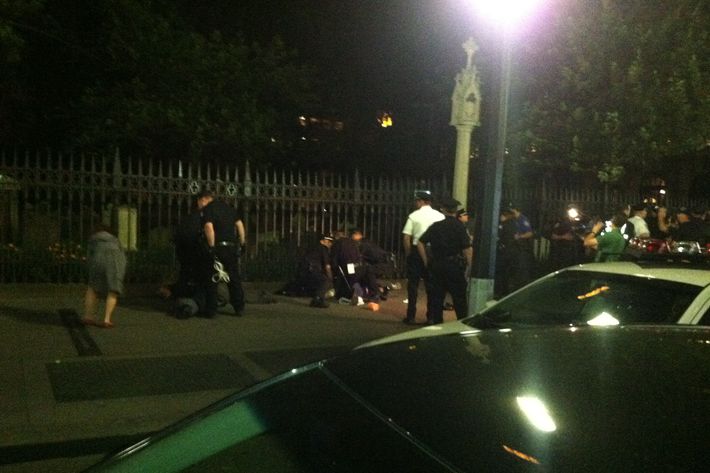 Pragmatists within Occupy continue to be hampered by the more anarchist wing of the movement, leading some of its greatest champions to lament the current state of affairs.

“The core reached its outer limit,” said Todd Gitlin, the Columbia professor who was president of Students for a Democratic Society in the sixties and is author of a recent book on the Occupy movement. “I don’t think there are any more anarchists or revolutionaries in America to be recruited.”

And so, as Occupy returns to downtown and promises to shut down Wall Street Monday morning with “The People’s Wall,” an act of civil disobedience at the Stock Exchange, some sympathizers are skeptical as to whether it will amount to anything.

“There are more police than people for crying out loud,” said Burton Dreyder, a supporter of the cause who works as an engineer in a building across the street from Zuccotti Park. “So much of what they’re trying to say and do is getting lost here,” he added, gesturing to a block once again filled with cries of indignation — “Shame! Shame! Shame!” — but not many bodies. The NYPD had effectively kettled the protesters by 9 p.m.