As serious as this storm is, Michael Bloomberg’s frequent press conferences have also provided New Yorkers a legitimate reason to smile: Her name is Lydia Callis*, and she’s the mayor’s official sign language interpreter, translating live on air as he delivers the latest news on Hurricane Sandy. Unlike Bloomberg’s own stilted Spanish, another highlight of the updates, Callis’s signing is both lightning-fast and emotive, her animated face lighting up and contorting happily as she goes, not unlike a guitarist during a blistering solo. Callis already has quite the online fan club (tweets listed below).

The sign language language lady in Bloomberg's press conference entourage has way too much swag for this. She is hypnotizing.

No making fun of Bloomberg's sign-language translator. Seriously. Only love. She's doing her job both very well, and with STYLE.

Is there a fan page yet for Mayor Bloomberg's sign language interpreter?

I am mesmorized by the sign language translator to Mayor Bloomberg's right.

I tell ya, the real star of Mayor Bloomberg's press conferences is that animated sign language translator he's got. Can't look away. #sandy

OMG, the sign-language gal next to Bloomberg right now is AWESOME.

There is already a Tumblr, “Lydia Calas’ [sic] Face for NYC Mayor,” and, of course, here she is in .gif form (h/t @ditzkoff): 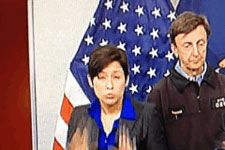 *We misspelled Ms. Callis’ name in an earlier version of this post.