Hurricane Sandy’s track as of 8 a.m. this morning.

As Hurricane Sandy barrels its way toward the Northeast, where it will meet up around Tuesday with about 40 other storms to create a Frankenstorm which produces an absurd list of weather phenomena — including “heavy rain, high winds, flooding, tornados [sic], coastal surges and possibly snow,” according to the AP — some New Yorkers must be thinking, There’s no way this is going to live up to the hype. Didn’t we expect more from Hurricane Irene last year? Doesn’t this kind of thing always fizzle out in the end? Should I really trust the media-meteorological complex?

But Weather People are stressing today that they really aren’t overhyping it when they declare that the likes of the Frankenstorm haven’t been seen in the Northeast in 100 years. As Bloomberg News reports:

See? That’s exactly the kind of quote we were just describing. Then there’s this guy, too:

“This is not being overhyped. I would use the terms devastating and historic,” Accuweather’s Bernie Rayno said. “A one in 30 year storm, or even in the fact the way this storm is going to be tracking east toward the coastline in New Jersey, it could be a once-in-a-lifetime storm.”

The Frankenstorm is so serious, in fact, that some meteorologists don’t even want to refer to it by a cartoonish name like Frankenstorm:

The name 'Frankenstorm' has been coined by some meteorologists and media.We are refraining due the severity of the storm.

Fair point. We could always go with SNOREASTERCANADOTRON (all caps).

Update: That’s Hurricane Sandy coming up from the South, and some other nameless storm thing coming in from the West. When they meet … Frankenstorm. 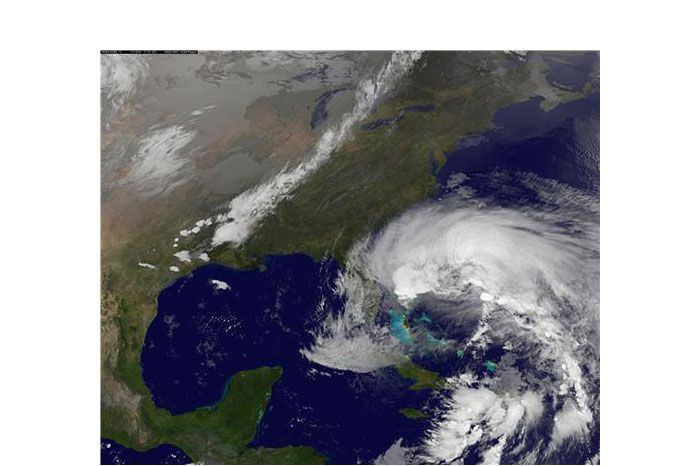 Update II: New Jersey has issues its first mandatory evacuation orders. If you live in Cape May County, time to head to high ground.

Update III: While it’s far from certain at this point, the MTA has acknowledged that its plans for dealing with Frankenstorm may include an “orderly shutdown,” as opposed to having MTA employees running around screaming, “THE SUBWAY IS SHUTTING DOWN. EVERYBODY GET THE HELL OUT AAAHHHHHH!”

Update IV: Mayor Bloombeg will be giving an update on the city’s preparations at 3 p.m. this afternoon. Also, not that this really concerns you, but exterior construction work has to stop by 5 p.m. tomorrow.

Update V: If you’re relying on Netflix to entertain you through the Frankenstorm, better get a back-up plan.

Update VII: Here’s the 2 p.m. forecast from the National Hurricane Center. Not that much different than the earlier one. 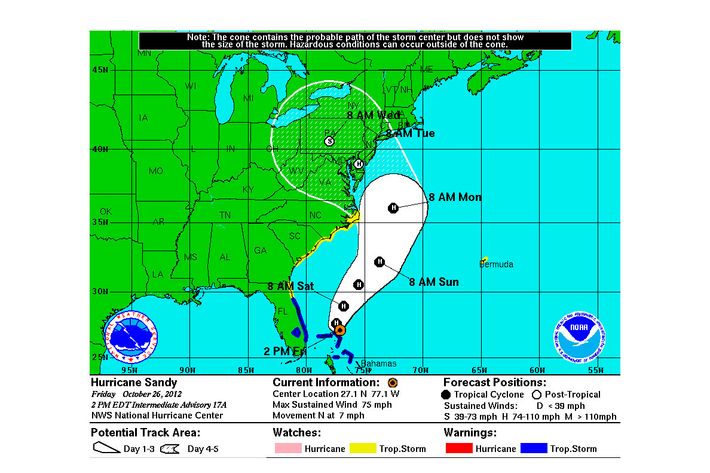 Update VIII: “Whenever or however or wherever the storm comes ashore, our city is likely to feel its effects,” said Mayor Bloomberg this afternoon, but just how bad it will be, no one can be sure. “We are so far from the main event that you just don’t know,” he added, indicating that the next updates from the city can be expected later tomorrow. As of now, no evacuations have been announced, but the mayor urged people to stay out of city parks on Sunday.

It Is Time to Start Freaking Out About Snowicane Sandy [Updated]

+Comments Leave a Comment
Weather Experts Not Overhyping the Frankenstorm

THE FEED
10 mins ago
the talented mr. santos
the talented mr. santos
Here’s Every Single Lie Told by George Santos
By Matt Stieb
Navigating the many exaggerations and falsehoods of New York’s newest representative.
22 mins ago
what we know
what we know
China’s Alleged Spy Balloon Tours America: Updates
By Chas Danner
Where it is, where it’s going, and why the U.S. hasn’t blown it away.
3:28 p.m.
creature capers
creature capers
The Hunt Is on to Find the Dallas Zoo Bandit
By Matt Stieb
A suspect was arrested after police received a tip that the alleged bandit was visiting the aquarium.

3:13 p.m.
just asking questions
just asking questions
What Could a Chinese Spy Balloon Over the U.S. Do, Exactly?
By Matt Stieb
Arms-control expert Jeffrey Lewis examines whether the Chinese spy ship over the West is an accident or a geopolitical middle finger.
12:46 p.m.
poll position
poll position
Trump’s Lead in 2024 Polls May Be Thinner Than We Thought
By Ed Kilgore
The ex-president looks weaker against Ron DeSantis and other likely Republican rivals in the polls that were most reliable last year.
12:28 p.m.
tremendous content
tremendous content
Trump Knows How to End Ukraine War ‘Immediately,’ But It’s a Secret
By Margaret Hartmann
Trump revealed there’s something he could say that would “guarantee” that the fighting ends now. Sadly, he won’t tell unless we reelect him.
11:31 a.m.
horrible bosses
horrible bosses
Working for George Santos Is As Crazy As It Sounds
By Matt Stieb
A former aide recorded his conversation with the congressman as he was getting fired. Santos wasn’t all that nice about it.
10:16 a.m.
crime
crime
New Jersey Councilwoman Shot and Killed Outside Her Home
By Nia Prater
Eunice Dwumfour, a 30-year-old member of the Sayreville Borough Council, was found shot dead on Wednesday night.
10:00 a.m.
the economy
the economy
The Fed Can Stop Choking the Economy Now
By Eric Levitz
The statistical and moral case for easing up on the interest-rate hikes.
9:00 a.m.
2024 presidential election
2024 presidential election
What on Earth Are These 2024 Long Shots Thinking?
By Ed Kilgore
It’s not inconceivable that someone like Nikki Haley could become a contender. But don’t count out sheer ego as motivation.
8:00 a.m.
just asking questions
just asking questions
What It Takes to Give Abortion Seekers (Actually Good) Advice Online
By Irin Carmon
The Online Abortion Resource Squad’s Ariella Messing on fighting disinformation in a post-Roe world.
2/2/2023
early and often
early and often
Trump Reminds Republicans He’s Willing to Ditch the GOP
By Ed Kilgore
Even if he doesn’t formally launch a third-party bid, Trump could doom the 2024 Republican presidential nominee.
2/2/2023
royals
royals
Australia Banishes King Charles From Its Banknotes
By Margaret Hartmann
In the battle to succeed his mother on Australian $5 bills, Charles loses to the First Australians.
2/2/2023
early and often
early and often
The Hunter Biden Counteroffensive Begins
By Matt Stieb
Tired of being a GOP punching bag, he threatened Fox News with a defamation suit and encouraged the DOJ to investigate how his laptop became public.
2/2/2023
the national interest
the national interest
The GOP Attack on Ilhan Omar Trivializes Antisemitism
By Jonathan Chait
Elevating Marjorie Taylor Greene exposes the hypocrisy.
2/2/2023
religion
religion
Badass Pope Briefly Endorses Giving People the Finger
By Benjamin Hart
A weird Thursday-morning tweet from the pontiff.
2/2/2023
early and often
early and often
The Latest Hunter Biden Revelation Is a New Low
By Matt Stieb
Texts reportedly show he withheld an employee’s pay for sex.
2/2/2023
what we know
what we know
New FBI Search of Biden’s Home Finds No Classified Documents
By Margaret Hartmann
The search of Biden’s Rehoboth, Delaware beach house was planned and consensual, like the searches of his office and Wilmington residence.
2/2/2023
early and often
early and often
The GOP Can’t Remember Why It Took the Debt Ceiling Hostage
By Eric Levitz
Republicans are fighting Biden for the sake of fighting.
2/1/2023
politics
politics
Eric Adams’s Approval Rating Is Falling
By Nia Prater
Crime is the top issue for New Yorkers, and very few say it’s gotten better under his watch.
2/1/2023
early and often
early and often
Nikki Haley Is Taking on Trump 2024 (or Running for VP)
By Ed Kilgore
The South Carolinian is expected to announce her run later this month, but Trump has already staked a claim on her crucial home state.
2/1/2023
tremendous content
tremendous content
Watch Trump Repeatedly Plead the Fifth, Like a Mobster
By Margaret Hartmann
New deposition video shows Trump, who once said only criminals and “the mob” take the Fifth, asserting his constitutional right more than 400 times.
2/1/2023
politics
politics
There’s Another Push to Change New York’s Bail Reforms
By Nia Prater
Governor Kathy Hochul reaffirmed her intent to give judges more discretion in setting bail during her budget presentation Wednesday.
2/1/2023
let it snow
let it snow
Our Long Local Snowmare Is Over
By Benjamin Hart
New York City finally saw some flakes stick to the ground on Wednesday morning. Better late than never.
2/1/2023
the big picture
the big picture
The End of ‘Zombie Neoliberalism’?
By Eric Levitz
There is burgeoning, bipartisan support for big government.