I want YOU to laugh at my zingers.

Number of Times the Name “Bush” Was Mentioned: One, in a reference to the Bush tax cuts

Number of Times the Name “Clinton” Was Mentioned: Three

Number of Times the Name “Reagan” Was Mentioned: Three

Number of Times the Name “Biden” Was Mentioned: Zero

Number of Times the Words “Middle Class” Were Uttered: Nine (seven by Obama, two by Romney)

Sexiest Line: “This is the biggest kiss that’s been given to — to New York banks I’ve ever seen.” — Romney, on Dodd-Frank

Most Shocking Absence: Any mention by Obama (or Jim Lehrer, but mostly Obama) of Romney’s highly unpopular 47 percent remarks

Top Three Zingiest Zingers:
3. “I had a friend who said, you don’t just pick the winners and losers; you pick the losers.” — Romney

2. “And at some point, I think the American people have to ask themselves, is the reason that Governor Romney is keeping all these plans to replace secret because they’re too good? Is — is it because that somehow middle-class families are going to benefit too much from them?” — Obama

Number of Times Obama Pointed Out That He and Romney Agreed on Something: Five:

Most Amazing Scientific Breakthrough: Moderator Jim Lehrer somehow introduced the debate and then made himself completely invisible for the next 90 minutes.

Most Insulting Depiction of Romney’s Family: “Look, I got five boys. I’m used to people saying something that’s not always true, but just keep on repeating it and ultimately hoping I’ll believe it.” — Romney, referring to his fully grown sons as compulsive liars

Most Awkward Small Talk: When the Obamas and Romneys mingled onstage after the debate 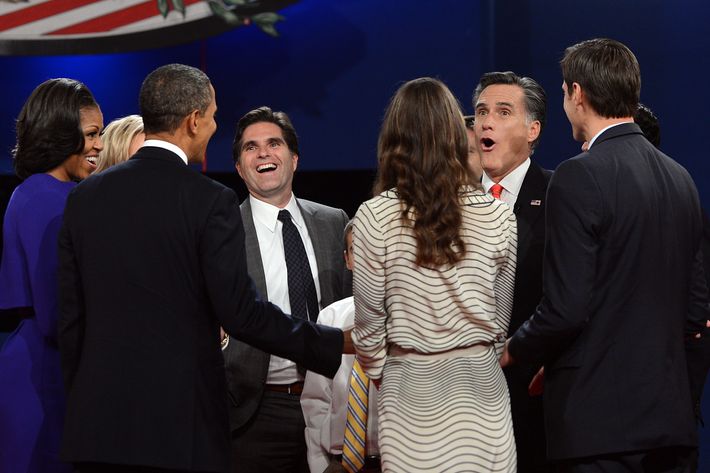 THE FEED
early and often
early and often
2022 Midterms: A Guide to the Races Worth Watching
By Ed Kilgore
A cheat sheet to keep track of all the crucial races, primary upsets, and campaign drama — Trump-fueled and otherwise — from now through Election Day.
2:30 p.m.
politics
politics
Biden Condemns White Supremacy As ‘Poison’ During Speech in Buffalo
By Nia Prater
The president and First Lady visited Buffalo to pay their respects in the aftermath of a racist rampage that left ten people dead.
11:43 a.m.
early and often
early and often
Generic Ballot Shows Republicans on Track to Retake House
By Ed Kilgore
The reliable indicator shows Republicans with a modest but steady lead. If 2022 is anything like recent midterms, the House will flip for sure.

11:18 a.m.
the national interest
the national interest
Joe Manchin Has Done a Terrible Job Fighting Inflation
By Jonathan Chait
The pivotal senator would rather complain about prices than do anything about them.
9:00 a.m.
life after roe
life after roe
Ending Roe v. Wade Is a War on Women and Children
By Sarah Jones
The right offers nothing but more suffering to the people it purports to help.
5/16/2022
covid-19
covid-19
How to Order More Free Home COVID Tests From the Government
By Margaret Hartmann
Starting Monday, U.S. residents can order a third batch of eight free COVID-19 tests from the federal government. Here’s how to claim them.
5/16/2022
early and often
early and often
Join Truth Social and Get Trump Posts a Whopping 6 Hours Early
By Margaret Hartmann
Slightly early access is all Truth Social will have going for it if Donald Trump returns to Twitter.
5/16/2022
early and often
early and often
The Democratic Party Is Extremely Unpopular Right Now
By Benjamin Hart
New poll numbers do not bode well for the party’s midterms chances.
5/16/2022
politics
politics
Draft Congressional Map Upends Several New York Democrats’ Districts
By Nia Prater
The proposed map, which is far less favorable to Democrats, is set to make some long-serving House members primary opponents.
5/16/2022
ukraine invasion
ukraine invasion
You Won’t Be Able to Get a Big Mac in Moscow Ever Again
By Benjamin Hart
McDonald’s is pulling out of Russia entirely as Putin’s invasion of Ukraine drags on — ending an era that began with promise.
5/16/2022
early and often
early and often
Pennsylvania Senate Candidate Fetterman Recovering From Stroke
By Chas Danner
The lieutenant governor said he is feeling better and that doctors told him he will make a full recovery.
5/16/2022
the money game
the money game
How Red States Are Trying to Snuff Out Green Investing
By Jake Bittle
Numerous states are launching a messy preemptive strike against so-called ESG efforts by the financial sector to move away from fossil fuels.
5/16/2022
power
power
‘We Don’t Know How Many Women Are Out There Like That’
By Roxanna Asgarian
Anna Borkowski accused three men of rape. Why did prosecutors stop her?
5/15/2022

5/16/2022
Pennsylvania Senate Candidate Fetterman Recovering From Stroke
By Chas Danner
5/15/2022
the city politic
the city politic
Why the Brooklyn Democratic Party Is at War With Itself
By Errol Louis
A fight over neighborhood patronage gigs has led to threats, insults, accusations, lawsuits, and an effort to oust the party’s first female boss.
5/15/2022

Finland, Sweden move closer to seeking NATO membership
—The Associated Press
5/15/2022
early and often
early and often
Trump’s Hold on the GOP Won’t Loosen Even If His Candidates Fail
By Ross Barkan
His cult of personality can withstand a few botched endorsements.
5/14/2022
2022 midterms
2022 midterms
Trump Endorses Extremist Mastriano in Pennsylvania Governor’s Race
By Ed Kilgore
It’s a bit awkward, since the gubernatorial candidate’s “running mate,” Kathy Barnette, is threatening Trump’s Senate candidate Dr. Oz.
5/14/2022
life after roe
life after roe
Clarence Thomas Decries ‘Irreparable Damage’ of Roe Opinion Leak
By Chas Danner
The Supreme Court’s loudest proponent of eliminating the right to an abortion is worried about institutional legitimacy and civility.
5/14/2022
early and often
early and often
The Republicans Who Saved Trump After January 6
By Ben Jacobs
This Will Not Pass demonstrates how GOP leaders betrayed their conscience in the name of power.
5/13/2022
covid-19
covid-19
What We Know About All the Omicron Subvariants, Including BA.4 and BA.5
By Matt Stieb and Chas Danner
Two new strains, BA.4 and BA.5, are driving a surge of cases in South Africa and have been detected in the U.S.
5/13/2022
early and often
early and often
Why Both Sides Are Making the Term MAGA Great Again
By Ed Kilgore
Democrats are saying “MAGA” more because they badly want to identify the GOP with its unpopular leader. So, too, do many Republicans.
5/13/2022
early and often
early and often
Mike Pence to Campaign for Fellow Trump Traitor Brian Kemp
By Ed Kilgore
The two MAGA heretics are, in their own ways, trying to show that Trumpism without Trump has a future.
5/13/2022
sports
sports
Brittney Griner’s Detention in Russia Extended Another Month
By Nia Prater
The WNBA star has been detained in Moscow since February. The State Department has classified her as “wrongfully detained.”
5/13/2022
business
business
Is Elon Musk About to Bail on Twitter, or Just Negotiating in Public?
By Benjamin Hart
The world’s richest man announced that his purchase of the company was “on hold” Friday morning, then clarified that he’s “still committed” to it.
5/13/2022
early and often
early and often
Scott Pruitt Brags About Media Attacks on His Rampant Corruption
By Ed Kilgore
Trump’s EPA chief could barely draw a breath without doing something comically scandalous. Now he’s trying to ride his notoriety to the Senate.
5/13/2022
life after roe
life after roe
The Anti-Abortion Christians Who Became Pro-Choice
By Sarah Jones
Why did we change our minds?