For years, federal investigators have doggedly pursued one Steven A. Cohen — he of the Greenwich mansion, pickled shark, and collection of Dutch Masters — over suspicions that his hedge fund, SAC Capital, was a festering morass of illegal insider trading.

Six of SAC’s current or former employees have been directly tied to insider trading, but Cohen himself has largely avoided becoming directly enmeshed in the scandal. For that, he can thank the famously webby structure of SAC Capital — which functions as a sort of loose federation of smaller hedge funds, all overseen by Cohen but directly managed by individual PMs. With so many traders each running their own mini-funds under the SAC umbrella, after all, how is Cohen supposed to keep track of every trade?

Well, now it appears that Cohen’s plausable deniability window is shrinking. He is being accused, for the first time, of direct involvement in an illicit trading scheme — a scheme allegedly run by former SAC Capital trader Mathew Martoma that netted $276 million for the firm, which the SEC is calling “the most lucrative insider trading scheme ever.”

Notice I said “accused,” not “charged.” Nothing in either the criminal or the civil complaint against Martoma directly charges Cohen with illegal acts. (In fact, the complaint doesn’t even name Cohen, calling him “Portfolio Manager A.”) But based on what’s in them, it wouldn’t be surprising if some of these incidents make it into an eventual set of charges against Cohen.

The short version of what Martoma is accused of doing at SAC Capital (or CR Intrinsic, rather, which was the name of Martoma’s sub-region within SAC Capital) is this:

– Hired an 80-year-old doctor, Sidney Gilman, through a so-called “expert network” consulting firm to give him advice about which medical and pharmaceutical stocks to buy and which ones to sell. (This is legal!)

– Became a “friend and pupil” to old Dr. Gilman, who also was a paid consultant for a drug company called Elan, and another one called Wyeth.

– Pumped Dr. Gilman for material, non-public information related to Elan and Wyeth, including the results of upcoming clinical trials that would move both companies’ stock prices once announced.

– Traded on that information, making millions of dollars and avoiding millions more of losses, and securing a bonus of more than $9 million for himself. (This is not legal at all!)

The evidence against Martoma looks fairly damning, given the amount of Elan and Wyeth stock that changed hands at SAC between the time Dr. Gilman allegedly called up Martoma and said, “um, this trial is not going to turn out well, you might want to short these stocks instead of being massively long” and the time Martoma then did exactly that.

Just look at this chart from the SEC’s complaint, which shows that in the eight days between the time Martoma (allegedly!) knew about the upcoming trial results and the time the results were announced, SAC’s trades of Elan’s stock amounted to more than 20 percent of the market-wide volume for that stock: 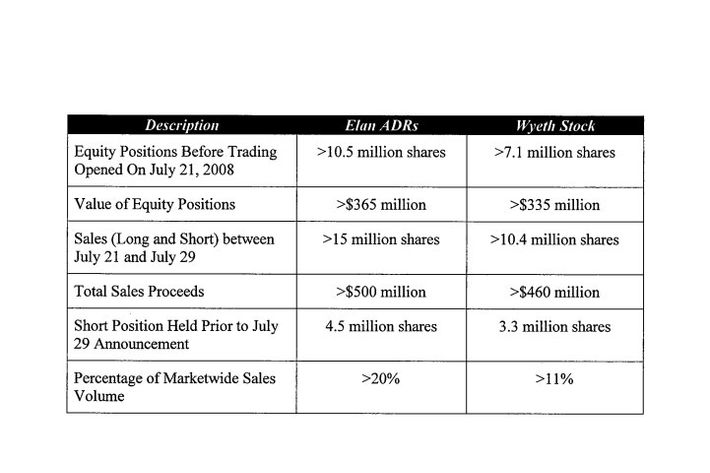 Now, I’m no lawyer, but to a jury, that looks baaaaaad. There is also the even more damning matter of a Powerpoint presentation containing the soon-to-be-announced results of the drug trial, which Elan sent Dr. Gilman in the days before the announcement and Dr. Gilman forwarded on to Martoma days before the alleged insider trading took place.

So we can conclude that Martoma’s goose is more or less cooked.

Now, just because Martoma was (allegedly!) insider-trading up a storm under Steve Cohen’s watch doesn’t necessarily mean that Cohen himself knew about or approved of what he was doing. But then there’s this:

Why would you take pains to keep a massive change in trading strategy surrounding a single stock confidential within your own firm? I have no idea. Cohen’s spokesman didn’t respond to my request for comment today, but the most generous interpretation is that Martoma had a strong hunch about Elan and Wyeth’s upcoming trial results based on legal consultations with Dr. Gilman and other publicly available information, but didn’t want to share those hunches with other SAC traders because he knew they disagreed and would fight him on it and maybe wreck his chance to get a big bonus at Christmastime.

But it’s much, much easier to think that Dr. Gilman was not, in fact, staying inside the murky legal bounds of what “expert network” consultants are allowed to tell hedge fund traders, that he gave him what everyone knew was material non-public information, and that Martoma and Cohen worked with SAC’s head trader to (a) get really short Elan and Wyeth, really quickly and (b) conceal that move from everyone else at the firm, lest they object to blatant insider trading. (A third possibility is that Martoma got illegal information from Dr. Gilman, lied to Cohen about how he knew what he knew, and attributed it to a really thorough channel-check or some other skeezy-but-legal method of getting information about stocks, which Cohen then accepted at face value before authorizing the trades. That would make Martoma guilty of insider trading, but Cohen possibly not.)

To sum up: Mathew Martoma looks very screwed. Steve Cohen looks somewhat less screwed, but he should still be pretty worried. (As Bess Levin says, “YOU NEVER WANT TO BE PORTFOLIO MANAGER A!”)

And for the prosecutors who have been chasing Cohen, including U.S. Attorney Preet Bharara, today is Christmas come early. After years of pursuing their billionaire big fish, it looks like they’re closing in on an actual case.

Update: A SAC Capital spokesman tells us: “Mr. Cohen and SAC are confident that they have acted appropriately and will continue to cooperate with the government’s inquiry.”

SEC Brings Steve Cohen In for a Little Talking-To