Anna Lederman, a Russian-speaking nurse working with Occupy Sandy, walked up fourteen flights of a pitch-black stairwell in the Surfside Gardens housing complex in Coney Island on Monday and knocked on an apartment door, the only light coming from her small headlamp. An elderly woman wearing a babushka, walking slowly with a cane, told Lederman in Russian that she was all alone. She had her medications, but could not get down the stairs, and needed food. “This,” she said, “is like the second blockade of Leningrad.”

Many New Yorkers affected by the storm have complained about the uneven response from the city, FEMA, and Red Cross. Veterans of the Occupy movement, with experience in New Orleans at the Common Ground Clinic after Katrina, and in Zuccotti Park last year, have stepped in to fill the gap. “That’s one of the reasons we mobilized here first,” said Becca Piser, a street medic trained as a first-responder. “No one’s telling us where to go or not to go.” The Occupy crew in Coney Island also included some of Lederman’s fellow nurses from Columbia University, who had been working in shelters and on the Occupy mission to Far Rockaway; a Russian and Spanish translator, who had answered the call on Facebook; Shawn Westfahl, one of the first medics at the Occupy encampment in Zuccotti Park; and Roger Benham and Jeff “Fidget” (his Occupy name), who worked together doing disaster relief in New Orleans and in Haiti after the earthquake.

Surfside Gardens is a rather ironically named set of five public-housing towers that are home to more than 1,300 seniors. Many residents left during the evacuation, but a few on each floor stayed. “Normally we see them outside once a day,” said a man outside on West 31st Street. “Since this happened, not at all.”

One Surfside resident, Teresa Stepien, told Lederman that she was all right but couldn’t get down the stairs. “This is terrible,” she said in halting English. “We feel very alone — like everybody forgot about us.” Down the hall, Edward Keane, 80, shuffled to his door with a walker. He was wheezing. How was his breathing? “I got a cold,” he said. “Not too good.” He had a home attendant who came that morning, he said, and he had water. What about food? He hesitated. “I got some pretzels … ”

FEMA and the NYPD have been distributing MREs — freeze-dried meals-ready-to-eat—that come in heavy plastic pouches and must be handled correctly to self-heat, have a high sodium content that is problematic for elderly people and those with hypertension, and have instructions printed only in English. A few packets lay scattered in the dark hallways. A number of residents said they did not know what to do with them. 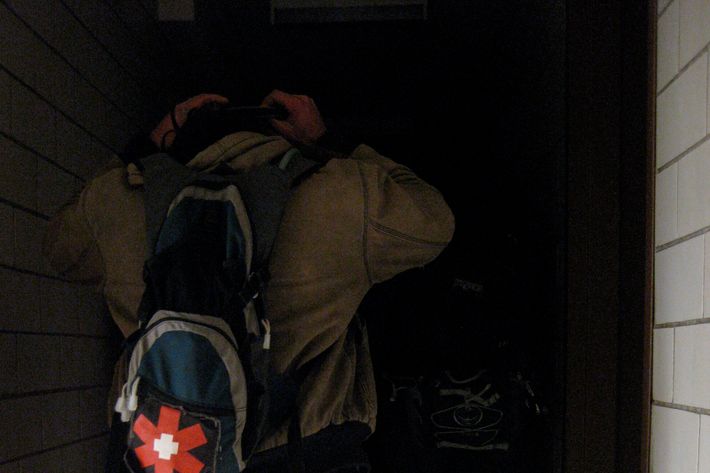 Westfahl headed upstairs in the dark to the tenth floor. He encountered a woman wrapped in a babushka who gestured that she was both deaf and mute. Through pantomime, Westfahl determined that she had water, and she opened the door of her refrigerator to show him the contents. “She doesn’t have much food at all,” he said quietly.

Benham and Fidget talked to a Chinese woman who spoke little English. She was “okay,” she said, “but maybe person … ” she pointed them inside, where an elderly man lay in bed. Benham checked his vital signs, and they scanned the room for medications. “He’s got nitro — so he’s a heart patient, he’s got heart disease, that’s for anti-clotting, he has episodes — this might even be a hospice case,” Benham said. Out in the stairwell, he said, “In New Orleans, that patient would have been evacuated, and would have died in the evacuation.” It was better for him to remain at home for now.

It was growing dark. Piser and Westfahl left to answer one last dispatch call for a cancer patient who needed a daily dose of chemo. Fidget duct-taped a sign on the outside of the building saying that every floor had been checked by Occupy Sandy for urgent needs.  “It comes down to the fact that they got these knocks,” said Lederman, the nurse. “I think it could be a psychological disaster — at the very least — if nobody at all came for six days.” 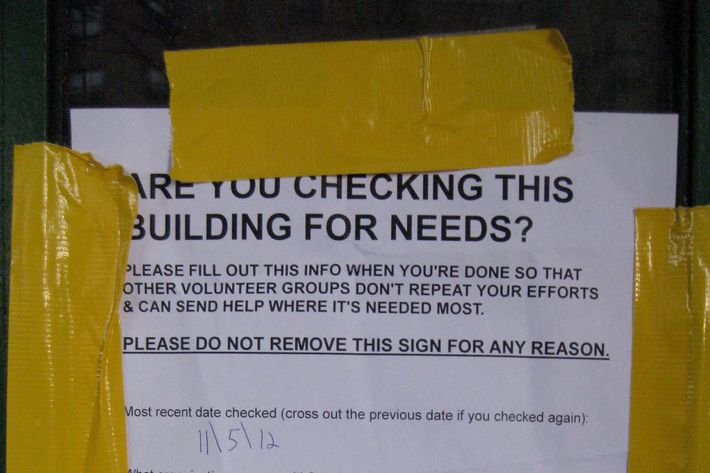 THE FEED
19 mins ago
lost in translation
lost in translation
The Spy Who Wasn’t
By Paula Aceves
Baimadajie Angwang wanted a visa for his daughter. He got charged with being an “insider threat” instead.
1/30/2023
royals
royals
King Charles Is Ready to Trash Harry — or Declare a Truce
By Margaret Hartmann
Or Prince Harry is right about the U.K. press relentlessly peddling utter nonsense.
1/30/2023
tyre nichols
tyre nichols
A Sixth Officer Has Been Suspended After Tyre Nichols’s Death: Updates
By Intelligencer Staff
The officer was relieved of duty the same day the five officers charged with murder were fired for the beating.