The death of Rupert Murdoch’s iPad experiment The Daily after less than two years has been met with a predictable mix of thoughtful autopsies, “I told you so,” and News Corp. schadenfreude. Absent entirely was the element of surprise: “I don’t think this is much of a shock,” said one reporter, who was hired before its launch along with dozens of young, hungry journalists from top-tier publications who were sold on the idea of a start-up feel with legacy media resources. The actual job was thrilling for a moment, but the excitement — much like the product — was not sustainable. After a host of defections from the original crop, The Daily laid off a third of its second-generation staffers over the summer. “Like one of the top bosses there today said,” the former reporter continued, “‘If you didn’t see this coming, you shouldn’t be working in the news business.’”

Similar reactions have poured out on social media — where the all-digital paper problematically never made much of an impact — as well as in private, between ex-employees who said their in-boxes have piled up with both reminiscing and good-riddance notes.

“It was a great experiment,” said Elizabeth Saab, who worked as an on-air reporter for the video team but was let go over the summer. “From the beginning, like any start-up, there was a sense of freshness and excitement. Was I disappointed when we had layoffs? Sure, but this is the news business. Kudos to Mr. Murdoch for having the guts to enter into an untapped, unknown market. Like any company, there are always going to be gripes and flaws, but hey, at least we tried.”

Others were less generous. “I have not looked at The Daily in a year — even with an iPad,” said another former staffer, who admits to a bias after leaving on bad terms. “It was an old person’s vision of a young person’s magazine. The Daily never made clear who its audience was and decided to talk down to readers. A lot of the pilot stuff did look beautiful, but it never had the focus of something like the New York Post. Its failure was a bit of business realities and a chunk of editorial stupidity.”

“You can’t create an entirely new brand and take it behind a paywall after 4 weeks, while limiting its footprint on the Internet, and then expect people to buy it. Where was the marketing?” remarked former Daily tech writer Trevor Butterworth on Facebook. “Second, it simply added more average-reader content to a market saturated with free average-reader content. It didn’t have the courage to be cool, quirky, nerdy, obsessive or snarky.”

Peter Ha, the nineteenth employee hired, remembered the launch as “actually pretty fun” in a post today on Gizmodo, and recalled the time Bono visited the familylike staff with Murdoch. “Great content doesn’t do much good if there’s no good way to share it,” he wrote. “The Daily was run like a newspaper from the top down, which isn’t a terrible idea. It just needed to go back a few more decades to a time when newspapers published multiple editions in a day, for instance.” Still, he added, “Troll all you want about News Corp. — 90% of which is going to be wrong anyway — but a lot of good people were given pink slips today and that’s unfortunate.”

Those who aren’t out of a job include Murdoch loyalists like editor-in-chief Jesse Angelo, publisher Greg Clayman, and gossip veteran Richard Johnson. “I’ll now be working for the New York Post, and will again have some readers,” a blunt Johnson told Nikki Finke, who sniped that “his reporting accuracy has greatly suffered in LA.” (According to Jeff Bercovici of Forbes, News Corp. management saw closing The Daily “as an alternative to killing the Post.”)

Murdoch himself is not shedding any tears either. “While we will face challenges at both companies going forward, together, we have already achieved the seemingly impossible,” he told all of News Corp. in a statement today. “Change always breeds uncertainty, but let me be very clear about one thing that is certain: We aren’t finished achieving what others deem impossible. Not even close.” Amid a host of other changes coming at the soon-to-be two-headed News Corp., he stopped by the offices of The Wall Street Journal to congratulate new editor Gerry Baker with a bubbly baptism. 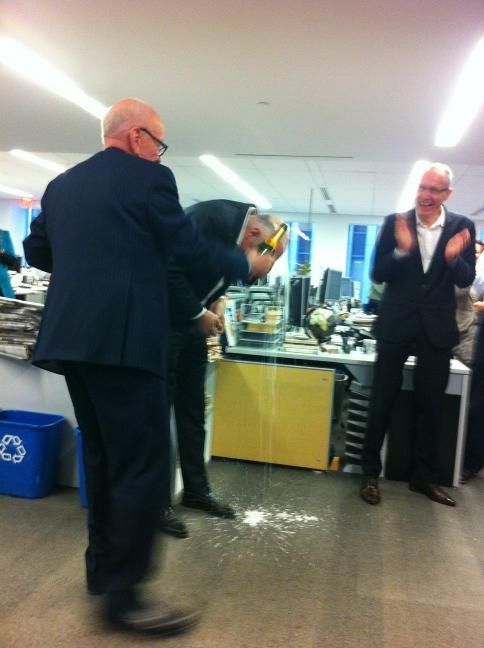 +Comments Leave a Comment
The Daily Staffers Saw This Coming