Over the weekend, an out-of-place creature found himself stunned amid a bunch of rowdy humans, while a rhesus macaque monkey was spotted wandering an Ikea parking lot in Toronto. The former, of course, was failed politician Mitt Romney, who attended a professional boxing match and told Manny Pacquiao before the fight, “Hello Manny. I ran for president. I lost.” The monkey’s name is Darwin, and like Romney, he did not get what he was looking for when he escaped the car, likely in search of those ridiculously cheap little meatballs. He’s since been taken from his owners, who were keeping him illegally, and has become a ward of the state, but in bringing joy to the entire Internet, Darwin at least made the most of his moment in the spotlight.

Las Vegas, meanwhile, was just the latest stop for Romney on his bizarre winter vacation, which has gifted the American public a “steady drumbeat of oddly normal and yet somehow surreal pictures of post-defeat Mitt Romney,” in the words of Talking Points Memo. “Popping up in the oddest places and yet not remotely ever fitting in or blending in. In every new setting he sticks out palpably as Mitt Romney.” And is he even having any fun?

Here’s Romney at Disneyland, widely known as the Happiest Place on Earth:

And yet, here’s Darwin, the Ikea Monkey, looking more at home standing idly on Canadian pavement:

Romney eating pizza, generally thought to be the greatest food on the planet:

And Darwin looking cute in his tiny coat and diaper:

Romney with the most important man in the world:

Darwin being a small monkey:

Mitt Romney grabbing not one, but two boxes of Honey Nut Cheerios, a delicious breakfast food, while wearing shorts in the winter:

And finally, Romney and his lovely wife witnessing a massive knockout punch at one of the biggest sporting events of the year: 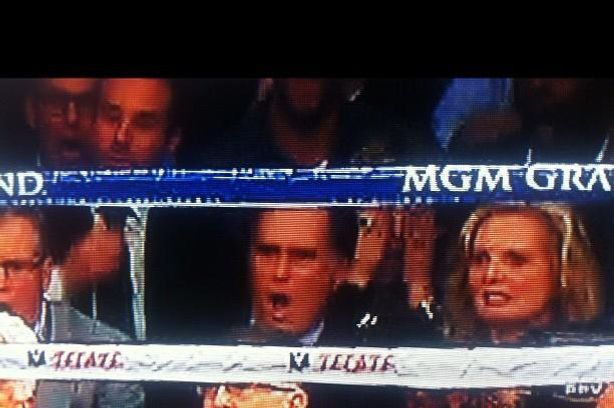 While Darwin, the Ikea Monkey, shows us all what it really means to be free: