Today’s horror in Newtown has reignited, again, a national conversation about gun control and America’s uniquely deadly culture of gun violence. Why does this keep happening? What should be done about it? Will anything be done about it? These are some of the salient questions being asked today. We’ve rounded up some smart reporting and commentary that addresses them.

Slate’s Allison Benedikt is not pleased at all with Obama’s response to the Newtown massacre so far:

Twenty-seven people are dead, 20 of them children, and you just told the nation that we’re all going to have to “extend a hand to those in need.” “We’ve endured too many of these tragedies,” you rightly noted, clearly moved by the particular horrendousness of what took place in Connecticut today. And then, holding back your tears, you said this: I react to news like this, “not as a president, but as a parent.”

God, that is unbelievably wrong. React as a president.

Over at the National Journal, Reid Wilson points out that Obama has, in the past, only paid lip service to meaningful gun control reform:

Obama has been given several sad opportunities to address gun violence. In Tucson, he spoke of “a national conversation” commencing, “not only about the motivations behind these killings, but about everything from the merits of gun safety laws to the adequacy of our mental health system.” After an attack on a Sikh temple outside Milwaukee, Obama said similar events “are happening with too much regularity for us not to do some soul-searching to examine additional ways that we can reduce violence.”

The New Yorker’s Adam Gopnik notes, with despair, that the rest of the world reacts much differently to shooting sprees:

So let’s state the plain facts one more time, so that they can’t be mistaken: Gun massacres have happened many times in many countries, and in every other country, the gun laws have been tightened to reflect the tragedy and the tragic knowledge of its citizens afterward. In every other country, gun massacres have subsequently become rare. In America alone, gun massacres, most often of children, happen with hideous regularity, and they happen with hideous regularity because guns are hideously and regularly available.

But what exactly does really taking on gun violence look like? Talking Points Memo’s Josh Marshall isn’t sure:

I’m hearing a lot of people saying we need to talk about guns, restart that conversation. And I agree, at least in the abstract. But what exactly are we talking about? And how we propose to get from here to there? How do we make our country less of a moral embarrassment.

Should we look to Japan? As this July story from The Atlantic explains, gun violence is rare there because there are hardly any guns:

Almost no one in Japan owns a gun. Most kinds are illegal, with onerous restrictions on buying and maintaining the few that are allowed. Even the country’s infamous, mafia-like Yakuza tend to forgo guns; the few exceptions tend to become big national news stories.

Mass shootings have been happening with greater frequency in recent years. Researchers have tried to figure out why, but as this Washington Post article notes … they can’t:

The idea that one mass homicide might lead to another has given way to plenty of articles and papers about whether the media should be more conscientious in the way it reports on these events. Giving a killer too much publicity might be a bad idea. The bulk of the research, however, suggests that researchers just don’t have a strong idea about what drives mass shootings, or why they’ve increased of late.

Mother Jones has compiled the definitive guide to gun massacres in America of the past three decades, including what weapons were used, whether or not they were acquired legally, and where the shooting happened: 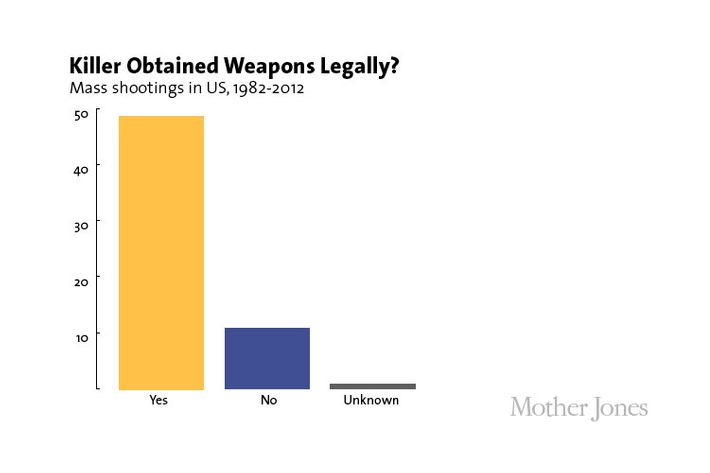 The Washington Post’s Wonkblog has eleven other facts about gun violence and gun culture in America:

4. Of the 11 deadliest shootings in the US, five have happened from 2007 onward.

That doesn’t include Friday’s shooting in Sandy Hook, Connecticut. The AP put the early reported death toll at 27, which would make it the second-deadliest mass shooting in US history.

In April, Jill Lepore examined the history of American gun laws and gun ownership for the The New Yorker:

The modern gun debate began with a shooting. In 1963, Lee Harvey Oswald bought a bolt-action rifle—an Italian military-surplus weapon—for nineteen dollars and ninety-five cents by ordering it from an ad that he found in American Rifleman. Five days after Oswald assassinated President Kennedy, Thomas Dodd, a Democratic senator from Connecticut, introduced legislation restricting mail-order sales of shotguns and rifles. The N.R.A.’s executive vice-president, Franklin L. Orth, testified before Congress, “We do not think that any sane American, who calls himself an American, can object to placing into this bill the instrument which killed the president of the United States.”