Moderate Republicanism is a tendency that increasingly defies ideological analysis and instead requires psychological analysis. The psychological mechanism is fairly obvious. The radicalization of the GOP has placed unbearable strain on those few moderates torn between their positions and their attachment to party. Many moderate conservatives have simply broken off from the party, at least in its current incarnation, and are hoping or working to build a sane alternative. Those who remain must escape into progressively more baroque fantasies.

The prevalent expression of this psychological pain is the belief that President Obama is largely or entirely responsible for Republican extremism. It’s a bizarre but understandable way to reconcile conflicting emotions — somewhat akin to blaming your husband’s infidelity entirely on his mistress. In this case, moderate Republicans believe that Obama’s tactic of taking sensible positions that moderate Republicans agree with is cruel and unfair, because it exposes the extremism that dominates the party, not to mention the powerlessness of the moderates within it. Michael Gerson recently expressed this bizarre view, and the pathology is also on vivid display in David Brooks’s column today.

Brooks begins by noting that the Grand Bargain on the deficit, which he has spent the last two years relentlessly touting, is not actually possible. Why is it impossible? Because, he writes, “A political class that botched the fiscal cliff so badly are not going to be capable of a gigantic deal on complex issues.”

Oh, the political class? That’s funny. In 2011, Obama offered an astonishingly generous budget deal to House Republicans, and Brooks argued at the time that if the GOP turned the deal down, it would prove their “fanaticism.” Naturally, they turned it down. Obama continues to offer a bargain including higher revenue through tax reform in return for lower spending on retirement programs, but Republicans refuse to consider higher taxes. So, in summary, this proves “the political class” is to blame.

What Obama should be doing in response, Brooks argues, is push for policies that provoke no opposition even from the craziest of the Republicans: “We could do some education reform, expand visa laws to admit more high-skill workers, encourage responsible drilling for natural gas, maybe establish an infrastructure bank.” Brooks argues that these issues would be uncontroversial enough to “erode partisan orthodoxies and get back into the habit of passing laws together.” Then, maybe we could pass some laws under a future president.

Note that solving actual problems is besides the point here. Brooks is almost explicit about this. He begins with the need for initiatives that he thinks will lead to happiness and comity between the parties in Washington, and then comes up with policies that might fit the bill. Not surprisingly, viewed from the standpoint of an agenda designed to make life better for Americans in some way, shape or form, Brooks’s proposed agenda is strange. Let’s consider his ideas:

Expand visa laws to admit more high-skill workers. Would this really pass right away without partisan animosity? Brooks says yes. We don’t have to guess. Democrats tried this last month. Republicans loaded it with poison pills and killed it dead. So instead they’re trying to do it as part of comprehensive immigration reform.

Encourage responsible drilling for natural gas. Wait, how much more encouragement do we need? The country is undergoing a massive natural gas boom: 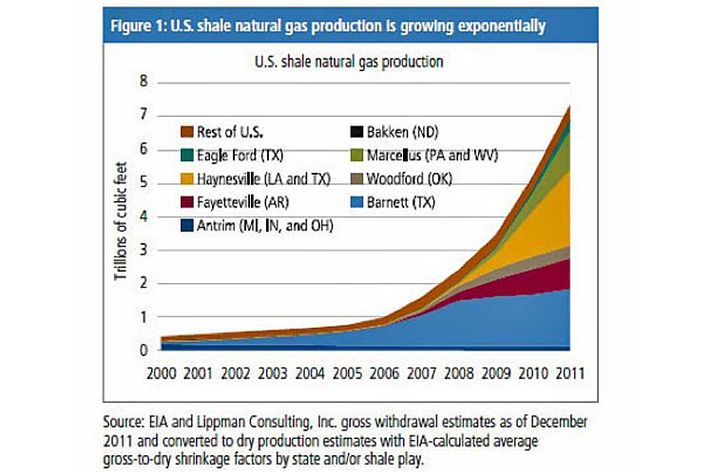 Is there some element to natural gas policy that needs fixing? Does Brooks just think the two parties should get together and congratulate each other for all the natural gas being produced?

Establish an infrastructure bank. Okay, this one is a good policy idea. But is it something Republicans would easily pass without rancor? In fact, Obama has been asking for this very thing for years now. And Republicans have called it dead on arrival.

So Brooks’s proposed alternative agenda consists of either empty list-filler or actual policies that Obama has proposed and Republicans have killed. But instead of this happy term of modest accomplishment, Obama is pursuing a nasty, partisan agenda. Step one of this devious ploy is to, as Brooks puts it, “invite a series of confrontations with Republicans over things like the debt ceiling — make them look like wackos willing to endanger the entire global economy.”

Right – Obama is the one inviting confrontations over the debt ceiling. Never mind that, before 2011, the debt ceiling was just an occasion for routine posturing, and Republicans insisted on turning it into a showdown with real, dangerous stakes. Also never mind that Obama offered to sign the plan — proposed by Mitch McConnell! — to permanently defuse the debt ceiling and let Republicans use it to posture against him rather than actually threatening a global meltdown. And never mind as well that, by refusing to cave in to extortion, Obama seems to actually be defusing the real danger to the world economy.

Worse, argues Brooks, Obama is nastily choosing an agenda intended only to harm Republicans. Obama’s proposals on gun safety and immigration, he writes, are “wedge issues meant to divide Southerners from Midwesterners, the Tea Party/Talk Radio base from the less ideological corporate and managerial class.”

Brooks asserts, but does not actually explain, that Obama chose these issues for the purpose of dividing the opposition — as opposed to trying to cut down on mass murders and fix a huge field of broken policy. Brooks concedes that Obama’s proposals here are moderate, but believes that the moderation is what makes them so nasty. By appealing to mainstream Republicans, he is splitting them from the most extreme Republicans!

You would think proposing policies that large numbers of Republicans agree with would qualify as the kind of centrism and bipartisanship Brooks has spent the entire Obama presidency calling for, but now that it’s here, it turns out to prove just the opposite to him.