The tweets began shortly after 9 a.m. EST. Although they were deleted intermittently during the epic struggle between the exiting employees and management, they were all preserved (not totally chronologically) through the magic of screen grabs: 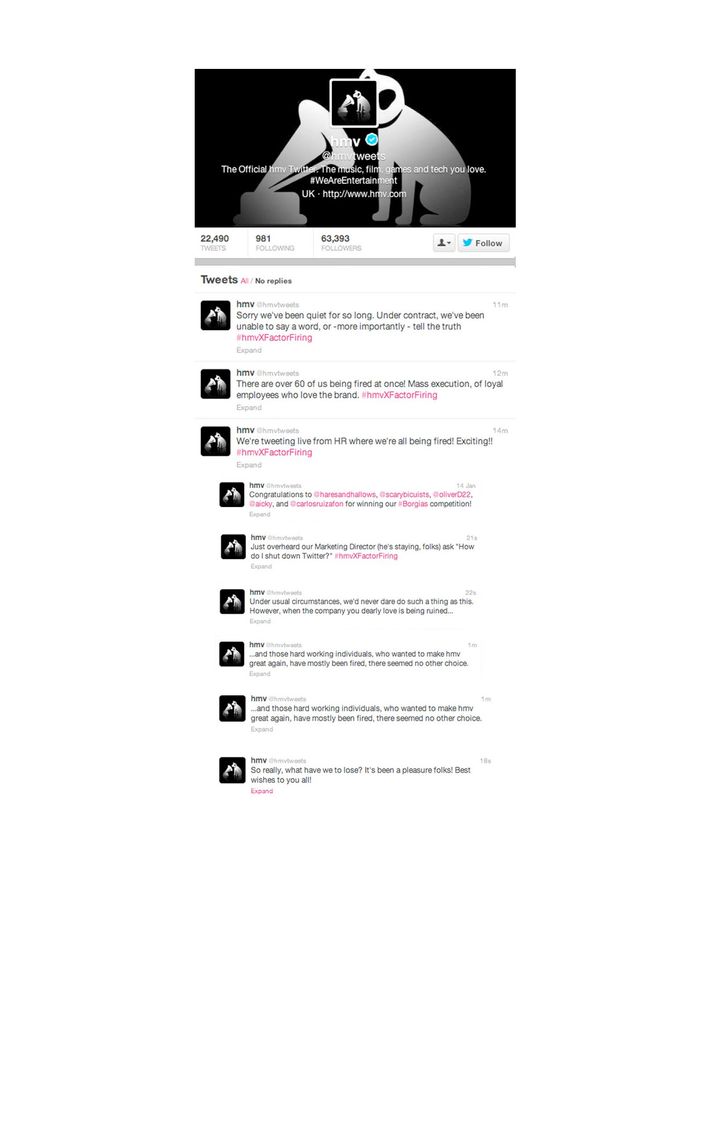 Ultimately, the Twitter insurgents were overwhelmed. But their efforts were not in vain: They managed to entertain everyone on Twitter for a solid half-hour.

4/22/2021
politics
politics
The Fateful Question of How Latinos Vote Going Forward
By Ed Kilgore
Trump and his party over-performed with Latino voters in 2020. It’s important for both parties to figure whether that was a fluke or a trend.
4/22/2021
politics
politics
What Happens Next After the Derek Chauvin Verdict
By Nia Prater
Many legal issues remain unresolved, from the fate of the other officers who arrested George Floyd to federal efforts to address police brutality.
4/22/2021
mars
mars
NASA Rover Creates Breathable Oxygen on Mars
By Matt Stieb
A device known as MOXIE produced enough oxygen for an astronaut to breathe for ten minutes, a major step toward manned missions to Mars.
4/22/2021
2022 midterms
2022 midterms
Georgia Republicans Wonder What to Do About Herschel Walker
By Ed Kilgore
His indecision about a 2022 Senate race after Trump urged him to run is complicating life for other would-be senators.
4/22/2021
politics
politics
Senate Passes Anti-Asian Hate Crimes Bill in Landslide Vote
By Nia Prater
The legislation was approved 94-1 in response to a surge in violence during the pandemic, with only Josh Hawley dissenting.
4/22/2021
voting rights
voting rights
The John Lewis Voting Rights Act Picks Up Steam
By Ed Kilgore
With a broader bill stalled, the Congressional Black Caucus pushes Democrats to restore the original Voting Rights Act.
4/22/2021
climate change
climate change
Why the World Can’t Trust America on Climate
By Eric Levitz
And what Democrats can do about it.
4/22/2021

The U.S. Supreme Court, in a 6-3 vote, ruled Thursday that a judge need not make a finding of “permanent incorrigibility” before sentencing a juvenile offender to life without parole. At the center of the case was Brett Jones who was 15 when he stabbed his grandfather to death during an argument about Jones’ girlfriend. He was convicted of murder, and a judge sentenced him to life without parole.

Writing for the majority, Justice Brett Kavanaugh said: “As this case again demonstrates, any homicide, and particularly a homicide committed by an individual under 18, is a horrific tragedy for all involved and for all affected.”

He added: “Determining the proper sentence in such a case raises profound questions of morality and social policy. The States, not the federal courts, make those broad moral and policy judgments in the first instance when enacting their sentencing laws. And state sentencing judges and juries then determine the proper sentence in individual cases in light of the facts and circumstances of the offense, and the background of the offender.”

Supreme Court Rejects Restrictions On Life Without Parole For Juveniles
—NPR
4/22/2021
vaccines
vaccines
U.S. Vaccination Pace Stalls After Months of Growth
By Benjamin Hart
A sharp week-over-week drop is a bad sign in the fight for herd immunity.
4/22/2021

Biden formally committed to the U.S. cutting fossil fuel emissions at least in half from 2005 levels by 2030

Saying the United States and other big economies “have to get this done,” President Joe Biden opened a global climate summit Thursday aimed at getting world leaders to dig deeper on emissions cuts. The United States pledged to cut in half the amount of climate-wrecking coal and petroleum fumes it is pumping out.

“Meeting this moment is about more than preserving our planet,” Biden declared, speaking from a TV-style set for a virtual summit of 40 world leaders. “It’s about providing a better future for all of us,” he said, calling it “a moment of peril but a moment of opportunity.”

“The signs are unmistakable. the science is undeniable. the cost of inaction keeps mounting,” he added.”

Biden’s administration is sketching out a vision of a prosperous, clean-energy United States where factories churn out cutting-edge batteries for export, line workers re-lay an efficient national electrical grid and crews cap abandoned oil and gas rigs and coal mines.

At ‘moment of peril,’ Biden opens global summit on climate
—AP
4/22/2021
conservatism
conservatism
GOP Stands Up to ‘Cancel Culture’ by Criminalizing Dissent
By Eric Levitz
Republicans believe that corporations opposing conservative causes undermines civil liberties, but governments criminalizing protest does not.
4/21/2021
minnesota
minnesota
Derek Chauvin Held in 23-Hour Solitary Confinement As He Awaits Sentencing
By Matt Stieb
The convicted murderer is only being let out of his cell one hour per day for exercise and is under observation every 30 minutes.
4/21/2021
andiamo
andiamo
‘King of Absentees’ Accused of Skipping Work at Italian Hospital for 15 Years
By Matt Stieb
New heights in working from home.
4/21/2021
2022 midterms
2022 midterms
After the Voting Wars, Who’s Likely to Turn Out in 2022?
By Ed Kilgore
The net impact of laws to suppress or expand voting rights is unclear, and will compete with many factors affecting the level and shape of turnout.
4/21/2021
politics
politics
The Most Powerful Weapon for Police Reform Is Back
By James D. Walsh
Biden’s Justice Department takes out a tool shelved by Trump to force local law enforcement to change.
4/21/2021
the national interest
the national interest
Steve Scalise’s Ignorant, Racist Case Against D.C. Statehood
By Jonathan Chait
Republican from murderous, corrupt state says D.C. has too much crime and corruption to be a state.
4/21/2021
coronavirus vaccine
coronavirus vaccine
How to Sign Up for a COVID Vaccine in New York
By Matt Stieb
All New Yorkers over the age of 16 are now eligible to sign up for a shot.
4/21/2021
power
power
Manhattan Drops Prosecution of Consensual Sex Work
By Claire Lampen
The DA will still pursue charges for visiting sex workers and for sex trafficking.
4/21/2021
immigration
immigration
Reconciliation May Not Solve Democrats’ Immigration Woes
By Ed Kilgore
As with the $15 minimum wage, a path to citizenship could succumb to a Senate parliamentarian’s ruling. And then there’s Joe Manchin.
4/21/2021
politics
politics
Justice Department Launches Probe of Minneapolis Police Practices
By Nia Prater
Merrick Garland announced a probe into whether the department has engaged in a pattern of “unlawful policing” a day after the Derek Chauvin verdict.
4/21/2021
the national interest
the national interest
Why Should Black Protesters Trust a Senate That Underrepresents Them?
By Jonathan Chait
Peaceful police reform means taking democratic reform seriously.
4/21/2021

Perhaps the future of the increasingly Trumpy GOP is … a guy Trump soundly beat in 2016?

… Christie, whose 2016 bid for the nomination was short-lived, has told friends that he’d be the only person in the 2024 field with executive experience who has run a presidential race before.

That’s a clear shot at one potential rival, Florida Gov. Ron DeSantis, who’s enjoying a surge of popularity from Republican voters for his handling of COVID-19 and his sparring with the media but hasn’t yet endured the scrutiny of a presidential bid.

Christie could run on a reputation for toughness that appeals to Trump’s base minus the former president’s recklessness, said one source. Another said he has a mix of combativeness and charisma that Republicans are looking for to take on President Biden and Democrats.

Scoop: Chris Christie friends believe he's running in 2024
—Axios
4/21/2021
covid-19
covid-19
1 in 4 New Yorkers Were Infected in First Wave of Virus, Study Finds
By Paola Rosa-Aquino
Black and Hispanic residents were twice as likely to test positive for COVID-19 antibodies than whites.
4/21/2021
derek chauvin trial
derek chauvin trial
Chauvin Found Guilty On All Counts: Live Updates
By Intelligencer Staff
The former Minneapolis police officer who killed George Floyd is now a convicted murderer.
4/21/2021
climate change
climate change
Biden to Pledge Emissions Cut of 50 Percent by 2030: Report
By Matt Stieb
The ambitious goal appears to be a signal to the world that the new administration wants to return to a leadership position in the climate emergency.