Politics can be confusing. Politics can be dry. So when President Obama needs to makes his case directly to the American people and he doesn’t want their eyes to glaze over from boredom halfway through, he reaches into his bag of rhetorical tricks and pulls out … an analogy! Sometimes they involve cars, sometimes mops. Often they take place in restaurants, for some reason.

Now, for the first time, you don’t have to go through the taxing mental effort of actually imagining Obama’s favorite analogies in your brain. With the magic of Photoshop and the wizardry of Daily Intelligencer’s Jed Egan and Maya Robinson, we have brought these scenes to life on your computer screen.

I’m busy. Nancy’s busy with our mops cleaning up somebody else’s mess. We don’t want somebody sitting back saying you’re not holding the mop the right way. Why don’t you grab a mop? Why don’t you help clean up? “You’re not mopping fast enough! That’s a socialist mop!” Grab a mop. Let’s get to work.

They drove our economy into a ditch. And we got in there and put on our boots and we pushed and we shoved, and we were sweatin’. And these guys were standing, watching us, and sipping on a Slurpee …. And then when we finally got the car up — and it’s got a few dings and a few dents, it’s got some mud on it, we’re going to have to do some work on it … they got the nerve to ask for the keys back!

Obama, on the GOP’s opposition to raising the debt ceiling, January 14, 2012:

You don’t go out to dinner and then, you know, eat all you want and then leave without paying the check. And if you do, you’re breaking the law.

It’s like somebody goes to a restaurant, orders a big steak dinner, martini, all that stuff, and then, just as you’re sitting down, they leave and accuse you of running up the tab!

What I’ve got is the Republicans holding middle-class tax relief hostage.

Obama, on his refusal to hold debt ceiling negotiations, January 14, 2012:

What I will not do is to have that negotiation with a gun at the head of the American people. 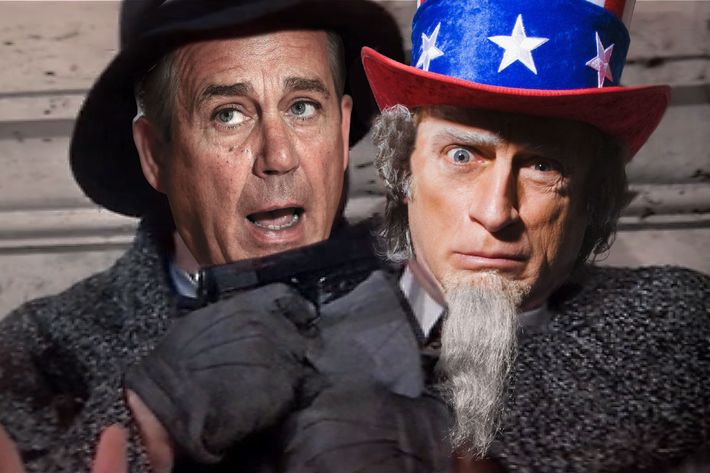 He said he’s going to be the coach that leads America to a winning season. The problem is everybody’s already seen his economic playbook. We know what’s in it. On first down, he hikes taxes by nearly $2,000 on the average family with kids … Sounds like unnecessary roughness to me … On second down, he calls an audible and undoes reforms that are there to prevent another financial crisis and bank bailout … And then on third down, he calls for a Hail Mary: Ending Medicare as we know it … That’s their playbook. That’s their economic plan. And I’ve got one piece of advice for you about the Romney-Ryan game-plan, Ohio: Punt it away.

The problem with a spending freeze is you’re using a hatchet when you need a scalpel.

What we’ve done is we’ve taken a scalpel to the discrentionary budget, rather than a machete.