A few days ago, the White House released an official photo of President Obama enjoying some beautiful Hawaiian waves as his Congressional colleagues slogged through fiscal cliff negotiations back in Washington. “A nice way to celebrate the New Year for the President was to jump in the ocean in his native state of Hawaii,” the caption reads on Flickr. “He was on his annual Christmas vacation with family and friends, and went swimming at Pyramid Rock Beach in Kaneohe Bay.”

What the caption does not mention is the black UFO (Unidentified Floating Object) visible a few short feet from Obama. Is it a hockey puck? Some random garbage? Or a piece of secret, water-borne government technology that official White House photographer Pete Souza inadvertently leaked to the world, including the Chinese? The latter, right? 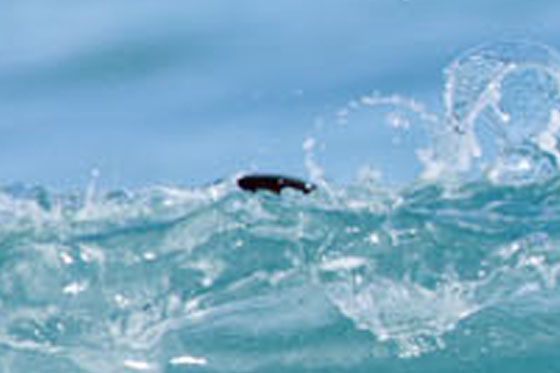 +Comments Leave a Comment
What Is This Black Thing in Ocean Next to Obama?

THE FEED
3 mins ago
vision 2020
vision 2020
Supreme Court’s Vague Election Orders Are a 2020 Wild Card
By Ed Kilgore
Republicans want the Supreme Court to stop lower-court judges from liberalizing voting rules, and the Court’s conservative majority often complies.
12:34 p.m.
just asking questions
just asking questions
How to Restore the Justice Department After Trump Leaves Office
By James D. Walsh
Constitutional-law expert Mark Tushnet on his call for a bipartisan commission to investigate the many ways the DOJ shattered norms under Trump.
11:47 a.m.
the national interest
the national interest
Trump Let the Right Make Him the Herbert Hoover of the Coronavirus
By Jonathan Chait
The virus was a chance for Trump to revive his presidency. He blew it by listening to conservatives.

A Covid-19 vaccine being developed by the University of Oxford and AstraZeneca AZN 0.08% PLC showed a promising immune response and low levels of adverse reactions in the elderly and older adults, according to an interim analysis that the drugmaker said was encouraging.

The vaccine, now in late-stage human trials aimed at showing its efficacy and safety, is a front-runner in the global sprint for a shot to protect lives and jump-start economies hobbled by the pandemic. Trials in the U.K. could produce results before year-end, fueling hopes among scientists and government leaders that a vaccine might be available for high-risk groups here by early 2021.

The results showed positive outcomes for adults over 56, including the especially higher-risk age group of those 70 and older, and were based on analysis of previously conducted interim safety and immune-response data, AstraZeneca and Oxford said Monday.

Just what we need as COVID-19 cases surge: an understaffed HHS

At least 27 political appointees have exited the embattled Health and Human Services department since the start of the Covid-19 crisis in February, according to a POLITICO review, and senior leaders are bracing for dozens more officials to depart swiftly if President Donald Trump loses re-election.

Such a wave of departures would leave only a shell staff shepherding the department through a uniquely challenging winter of coronavirus outbreaks and drug and vaccine authorizations until Inauguration Day on Jan. 20, according to interviews with 17 current and former HHS officials, some of whom requested anonymity to discuss the sensitive issue.

10/23/2020
U.S. Sets New Record in Daily COVID-19 Cases, As Third Wave Surges On
By Benjamin Hart and Chas Danner
7:00 a.m.
four long years
four long years
The Birth of an Extraordinary Modern Progressive Movement
By Rebecca Traister
The last four years have been an era of radical right-wing rule in Washington — and of remarkable left-wing populist response.
7:00 a.m.
the swamp
the swamp
The Tortured Self-Justification of a Trump Enabler
By Olivia Nuzzi
How an anonymous Republican squares his love of power with his contempt for the president.
10/25/2020
coronavirus
coronavirus
Pence Defies Quarantine As White House Deems His Campaign Presence ‘Essential’
By Matt Stieb
After exposure to multiple COVID-positive aides, Pence’s essential work this week includes traveling to rallies on Sunday, Monday, and Tuesday.
10/25/2020
vision 2020
vision 2020
Win or Lose, Republicans Need a Better Plan for the Future Electorate
By Ed Kilgore
By 2024, millennial and Gen-Z voters are going to give a distinctly diverse and leftward tilt to politics. Trumpism won’t cut it.
10/25/2020
vision 2020
vision 2020
Facebook Prepares Potential Emergency Measures for the Election: Report
By Matt Stieb
The platform is reportedly planning to change users’ news feeds and slow the sharing of viral content if election violence becomes a reality.
10/25/2020

In the final stretch of the campaign, we find three Southern battlegrounds that could still go either way. Our estimates show Joe Biden with just a two-point edge over President Trump in Florida, Biden up four points in North Carolina, and the contest even in Georgia. …

[V]ery different views on the coronavirus pandemic still shape the race in all these states. In all, most Biden voters are very concerned about getting it, and Mr. Trump’s voters, by comparison, are far less concerned. Biden also gets better marks overall on how he would handle the outbreak.

An early-vote trend that could prove decisive on Election Night

One important election night twist: early mail ballots are really good for Biden in Arizona so far, reversing the traditional pattern (you may recall McSally led and then Sinema over took post election day).
Now, I’d expect Biden to have the Election Night lead in Arizona.
—@Nate_Cohn

10/22/2020
Arizona Is Ready to Toss Trump — and the Rest of the GOP
By Olivia Nuzzi
10/24/2020
how was your week?
how was your week?
1,443 New York Readers on Their Plans for Election Night and the Holidays
By The Editors
“This year it’s turkey pot pie for one.”
10/24/2020
the national interest
the national interest
Even If Trump Loses, Republicans’ Authoritarian Ambitions Will Live On
By Jonathan Chait
What an election can and can’t save.
10/23/2020
coronavirus
coronavirus
U.S. Sets New Record in Daily COVID-19 Cases, As Third Wave Surges On
By Benjamin Hart and Chas Danner
With winter looming, the pandemic is getting worse and there is no end in sight.
10/23/2020
vision 2020
vision 2020
Is Republican Voter Suppression Starting to Backfire?
By Ed Kilgore
The same dynamic that led Wisconsin Democrats to turn out massively in the teeth of a pandemic could be fueling the surge in early voting.
10/23/2020
the national interest
the national interest
Never Forget the Hypothetical Victims of Biden’s Swine Flu Disaster
By Jonathan Chait
Biden’s pandemic was much worse, except for the lack of death.
10/23/2020

Nearly 1.5M have already voted by mail-in ballot in PA

Nearly half of the mail-in ballots in Pennsylvania have been returned.

In the 2016 general election, 266,208 absentee ballots were cast statewide.https://t.co/bNkmRDLQYF
—@kylegriffin1
10/23/2020
domestic terror
domestic terror
Militias Pose High Risk of Election Violence, New Report Says
By Sarah Jones
Antifa isn’t a real threat. The far right is.
10/23/2020
politics
politics
Focus Group Slams Trump for No Empathy in Final Presidential Debate
By Sarah Jones
Veteran pollster Stan Greenberg says it was a “disastrous” performance by the president, according to people who watched.
10/23/2020
the national circus
the national circus
Biden Makes the Strongest Case Yet for His Presidency
By Frank Rich
To anyone not grading on a curve, there was a clear winner of Thursday’s debate.
10/23/2020
poll position
poll position
Where Trump and the GOP Need Immediate Gains to Win on Election Day
By Ed Kilgore
It’s getting late in the day for a Republican surge, and the trouble for Trump and his party is that they trail over a large landscape.
10/23/2020
the top line
the top line
Gamblers Say Trump Is Almost Tied With Biden. Don’t Bet on It.
By Josh Barro
It sure seems like the election-prediction markets are informed more by hobbyist enthusiasm than political reality.
10/23/2020

Biden still has a huge financial edge over Trump

Former Vice President Joe Biden is carrying a cash advantage of more than $100 million over President Donald Trump into the final weeks of the election, according to newly filed campaign finance reports.

The filings also show that Biden continues to significantly outspend Trump. The president’s campaign raised $44 million and spent $63 million in the first two weeks of October, while Biden raised $130 million and dropped $145 million — more than $10 million a day during that time.

Biden carries big cash advantage into final weeks of election
—Politico
10/23/2020
ballot initiatives
ballot initiatives
Americans Will Vote on 120 Statewide Ballot Initiatives in This Election
By Ed Kilgore
From criminal-justice reform to affirmative action to gig-worker protections, voters have a lot to consider beyond which candidates they prefer.