Blame the BlackBerry for the blurriness. Photo: Courtesy of Peter King

New York Congressman Peter King became an inadvertent star of yesterday’s presidential inauguration by chance. “I didn’t realize until I got there what a good seat I was going to have,” Representative King told Daily Intelligencer this afternoon. Assuming he’d be too far away to catch anything good, King left his camera at home, and was forced to rely on a BlackBerry when it turned out he was positioned right next to the entrance way.

“These pictures should be worth millions!” he said. Luckily, we talked him down and King provided us with his inauguration close-ups for free, although he was much more excited by his shots of the Obamas and the Clintons than the one of Beyoncé and what’shisface.

“Anybody who looked important I took a picture of at inauguration,” King tweeted this morning, along with today’s New York Post cover (“Pols fawn over Beyoncé , Jay-Z at inaugural”), which catches him in action. “I didn’t know who the guy beside @Beyonce was.” That’s Jay-Z, arguably the most famous rapper of all time and the part-owner of a professional basketball team very close to where the congressman was born and serves.

“I didn’t know!” King insisted. “I knew the name but I didn’t realize that was him. I just know Beyoncé from seeing her picture in the papers. I don’t know rap. I stopped listening to music after Frankie Lymon and the Teenagers.”

“I’m not that starstruck with entertainers,” he continued, but “if we’re gonna focus on somebody, I’d rather focus on her than him — that’s a beautiful woman! If it was David Wright or R.A. Dickey, then I’d be excited.”

As for the news that Beyoncé lip-synched the National Anthem, King shrugged: “Why ruin a good story?” he said. “She did a a great job singing it and made everybody feel good.”

King said his Beyoncé and Jay pic did cause “a real family dispute,” but not because he’s out of touch. “My son is a huge fan of Oasis,” the congressman explained. “Apparently, Noel Gallagher and Jay-Z are in a death struggle and my son doesn’t want the world to think his dad was on the side of Jay-Z. He wanted me to put out an official statement.”

Whether or not he was picking sides, King is now forever immortalized snapping a smartphone photo of the pop stars. “It’s ironic to end up on the front page of the paper,” he said. “I took about 40 shots yesterday — ten of the Clintons, ten of the Obamas, ten of the Chief Justice — and the one that makes it is Beyoncé.”

Here are a few more, for the history books: 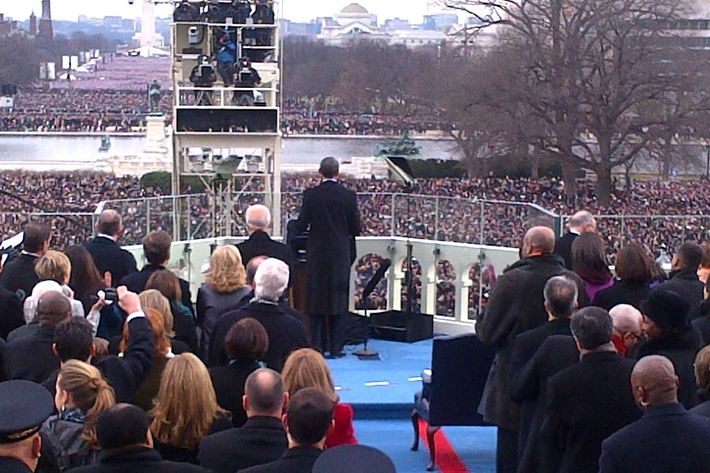