Lost in all the discussion of whether big banks are constitutionally a Good Thing or a Bad Thing for America is that big banks are increasingly not where the action on Wall Street is happening. More and more, as large, complex financial institutions are being pilloried and sued for their misdeeds, and their executives are being forced to cut back on bonuses until profits recover, small and midsize banks are eating their lunch.

Take, for example, Richard Handler. He is the CEO of a bank called Jefferies. You’ve never heard of Jefferies, but that is kind of the point. It’s a small, boutique bank, recently bought by a conglomerate called Leucadia, that generally flies below the radar, and as such can do things that much larger banks can’t get away with. Like paying all-cash bonuses. Like giving Handler a $58 million pay package for 2012, which makes the pay packages of Goldman Sachs CEO Lloyd Blankfein ($21 million) and JPMorgan Chase CEO Jamie Dimon ($11.5 million) look like chump change.

The rise of little banks started almost immediately after the financial crisis. Boutiques that specialized in M&A advisory and other old-school banking functions stayed relatively steady during the crisis, unlike their too-big-to-fail brethren, most of whom were loaded down with piles of toxic mortgage-backed securities. Compare the five-year stock charts of Jefferies and Evercore Partners (another little bank) with the chart of Citigroup during the same time period: 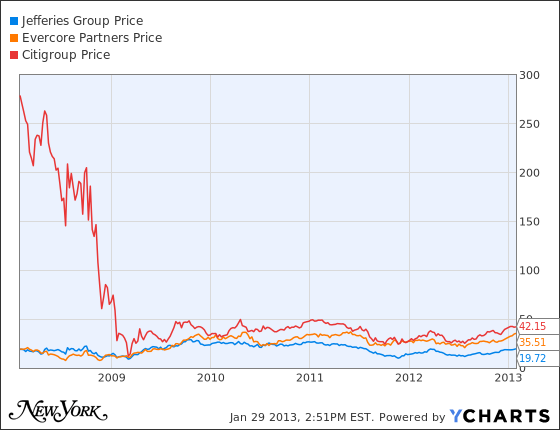 As this month’s earning season showed, big banks are slowly recovering, but they still have some hard-to-fix problems. The most important issue to these banks’ employees — compensation — is not likely to come back up to pre-2008 levels for many more years (if ever), both because firms can no longer afford the insane bonuses of the pre-crisis era and because shareholders and regulators would balk at the return to profligacy.

Lauren LaCapra had a good piece the other day about the “talent drain” on Wall Street. As workers become disillusioned with the regulatory pressure and falling pay at big banks, they are increasingly seeking their fortunes at hedge funds, private-equity firms, and in the VC/tech sector.

Now Jefferies and other small banks are trying to peel away disgruntled big-bank employees by giving them another option — remaining in banking, but going to a small firm, where they can get paid more, dodge the scrutiny of regulators and the wrath of the Occupy crowd, and generally live a much nimbler, unburdened existence. It’s a brilliant marketing move on Handler’s part, and I wouldn’t be surprised if as the talent drains out of large Wall Street firms, some of it ends up on his payroll.

THE FEED
9 mins ago
liveblog
liveblog
Eric Adams Opens Wide Lead in NYC Mayoral Race: Updates
By Intelligencer Staff
Andrew Yang has conceded as Kathryn Garcia and Maya Wiley scrap for second place.
12:24 a.m.
politics
politics
Can Eric Adams Hold On to His Lead?
By Ben Jacobs
What the first results of the mayoral race mean for him and his opponents.
6/22/2021
2022 midterms
2022 midterms
Will Young and Minority Voters Save Democrats in 2022?
By Ed Kilgore
With or without some help from Donald Trump, Democrats need to keep the voters who surged to the polls in 2018 and 2020 engaged.

6/22/2021
covid-19
covid-19
U.S. Falls Short of Biden’s July 4 Vaccination Goal
By Paola Rosa-Aquino
The White House tried to put a positive spin on the figures but admitted it will take a “few extra weeks” to fully vaccinate 70 percent of adults.
6/22/2021
voting rights
voting rights
Believe It or Not, Some States Are Making It Easier to Vote
By Ed Kilgore
Amid the outcry over Republican-led states restricting voting opportunities, some states are moving in the opposite direction.
6/22/2021
pivot
pivot
American Airlines Shouldn’t Have Been Bailed Out
By Intelligencer Staff
Despite getting billions in loans, the company furloughed thousands and is now contending with a worker shortage.
6/22/2021
covid-19
covid-19
Nursing-Home Deaths Increased Exponentially Last Year
By Sarah Jones
The toll of COVID is becoming clear.
6/22/2021
the national interest
the national interest
Kyrsten Sinema’s Filibuster Defense Is Factually Untrue
By Jonathan Chait
Moderate senator loves the supermajority requirement, doesn’t understand how it works.
6/22/2021
politics
politics
Why There Could Be No Winner on Election Night
By Nia Prater
New York City’s experiment in ranked-choice voting begins.
6/22/2021
nyc mayoral race
nyc mayoral race
Why Progressive New Yorkers Should Rank Yang Over Adams
By Eric Levitz
Vote for the unqualified cipher (as your fifth choice). It’s important.
6/22/2021
explainer
explainer
What We Know About the Dangerous COVID B.1.617.2 Delta Variant
By Chas Danner and Paola Rosa-Aquino
The more transmissible strain has spread to more than 90 countries, fueled numerous rapid outbreaks, and will likely become dominant in the U.S.
6/21/2021
pride month
pride month
Carl Nassib Is the NFL’s First Active Out Gay Player
By Bethy Squires
“I’ve been meaning to do this for a while, but I finally feel comfortable enough to get it off my chest.”
6/21/2021
games
games
The NCAA Looks Like a Dead Organization Walking
By Will Leitch
Justice Brett Kavanaugh, of all people, has stuck a dagger into college sports’ unjust business model.
6/21/2021
the city politic
the city politic
The Race for Mayor Has Gone Absolutely Berserk
By David Freedlander
Yang and Garcia team up. Adams cries victim. Wiley goes after them all.
6/21/2021
mayor's race
mayor's race
How Kathryn Garcia Campaigned in the Race’s Final Hours
By Ben Jacobs
She embraced her alliance with Andrew Yang — when she was talking to his voters.
6/21/2021
2022 midterms
2022 midterms
Anti-Government Extremist Ammon Bundy Joins Wild Governor’s Race in Idaho
By Ed Kilgore
Bundy and Lieutenant Governor Janice McGeachin could compete for the militia vote in a 2022 gubernatorial race that may not have an incumbent.
6/21/2021
nyc mayoral race
nyc mayoral race
Adams Likens Garcia-Yang Pact to Jim Crow
By Benjamin Hart and Nia Prater
According to the mayoral front-runner, the standard tactic of forming a strategic alliance is akin to voter suppression.
6/21/2021
religion
religion
Catholic Bishops Move Toward Denying Biden Communion
By Ed Kilgore
Conservative bishops are trying to be more Catholic than the pope on enforcing opposition to abortion. A big fight is brewing.
6/21/2021
the national interest
the national interest
Is This the Dumbest Filibuster Defense Ever Written?
By Jonathan Chait
I cannot believe this column was published in a national newspaper.
6/21/2021
2021 mayoral race
2021 mayoral race
Eric Adams Volunteer Stabbed in the Bronx
By Chas Danner
He was reportedly stabbed multiple times while canvassing for Adams, but survived. The motive for the attack is not yet clear.
6/21/2021
the national interest
the national interest
D.C. Statehood Is the Democrats’ Only Option
By Jonathan Chait
Hoping to win by coupproof margins is not a strategy.
6/21/2021
politics
politics
Mayamentum!
By Ben Jacobs
Why Maya Wiley is surging at the last possible moment.
6/20/2021
media
media
Inside the Petty, Vindictive, Career-Ruining Infighting at NY1
By Caitlin Moscatello
Onscreen, NY1 seems like a happy family, but a lawsuit exposed the tumult behind the scenes.
6/20/2021

Early voting complete! Day 9
•Manhattan - 60,649
•Bronx - 20,590
•Brooklyn - 65,516
•Queens - 35,361
•Staten Island - 9,081
Total Number of Early Voting Check-Ins 191,197
*Unofficial and Cumulative as of close of polls
—@BOENYC
6/20/2021
2021 mayoral race
2021 mayoral race
Garcia Is Taking Yang’s Help, But Not Returning It
By Chas Danner
The mayoral candidates may be campaigning together, but only Yang has cross-endorsed, and Garcia says she just wants his “number twos.”
6/20/2021
the economy
the economy
A World of High Wages and Cheap Burrito Bowls Is Possible
By Eric Levitz
Why better pay for some doesn’t necessarily mean more expensive goods for others.