Not the best choice.

Joining the ranks of Twitterers, senators, and people with sight, an NAACP official tells Daily Intelligencer that he’s offended by the latest cover of Bloomberg Businessweek, which depicts a minority family reveling in a house overflowing with cash.

“It’s racist and a mischaracterization,” says Dedrick Muhammad, senior director of economics at the NAACP. “They are clearly racializing the issue by having mostly Blacks and Latinos, possibly only Blacks and Latinos, benefiting.” The cover art, which runs alongside the headline “The Great American Housing Rebound,” has come under heavy fire for what critics see as both blatantly racist caricature and also subtle dog whistle on race in the housing market.

The controversy first erupted this morning after Matthew Yglesias at Slate pointed out the cover and suggested that Businessweek “ought to be ashamed.” Soon after the post went up, the Twittersphere was in an outcry over the offending image, with thousands of tweets calling for an explanation of just how the cover made it to print. By this afternoon, even Senator Jeff Merkley of Oregon was calling the cover art “racist” and “outrageous.” 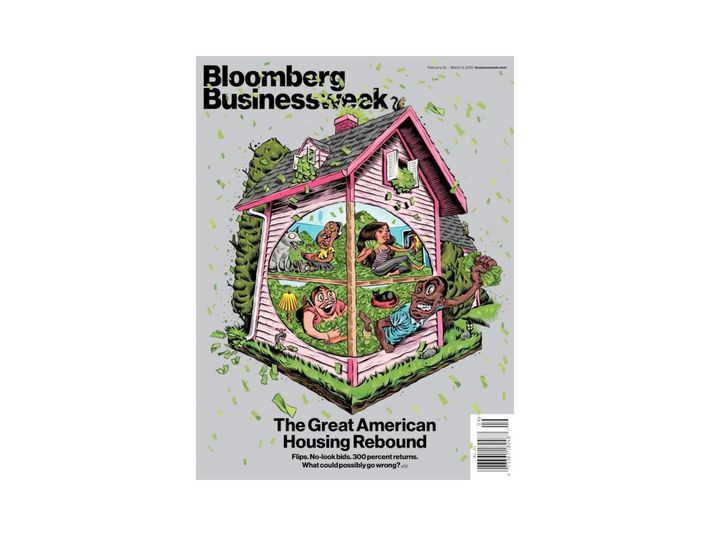 Amid the pitchfork-sharpening, however, most publications initially failed to report the seemingly relevant details that the illustrator, the Peruvian-born Andres Guzman, is Latino. “I simply drew the family like that because those are the kind of families I know. I am Latino and grew up around plenty of mixed families,” Guzman said, according to Slate. While the illustrator’s ethnicity may change the way some perceive the story, for the NAACP’s Muhammad, it doesn’t make much of a difference.

“It could have been an African American person [drawing it],” says Muhammad. “It still puts forth a historically racist depiction that minorities are out grabbing money and benefitting. It doesn’t change my opinion of it.”

In Muhammad’s view, this latest cover is part of the false assertion, common on the right, which blames minority borrowers for the subprime crisis while ignoring the issues of predatory lending and racial inequality in home ownership. “That somehow blacks and Latinos benefitted from the subprime mortgages and are about to enter a windfall is just inaccurate and represents the worst aspect of racialized politics,” he says. “It’s offensive on a whole bunch of levels.”

In an apology issued to Politico, Businessweek editor Josh Tyrangiel expresses “regret” over the issue, stating, “Our intention was not to incite or offend. If we had to do it over again, we’d do it differently.” All things considered, it does appear that the regrettable cover was not designed out of malice, but simply thanks to a colossal error of judgment on the part of the editors and art department. As the furor over the cover turns from a boil to a simmer, the whole episode, in hindsight, is best summed up by a line from the cover’s subheadline: “What could go possibly wrong?”