In his farewell address, Dwight Eisenhower famously, and presciently, warned of the growing power of the military-industrial complex. What Eisenhower never realized is that an alliance between meteorologists and supermarkets would one day become just as pernicious an influence on American society.

Now, of course, meteorologists can’t actually create extreme weather events. As we all know, hurricanes happen when God cries, and snowstorms happen when God has dandruff, and so on. But just as the military-industrial complex tends to oversell national security threats, the weather-based media can, and do, overhype these events in order to drum up TV ratings and page views for themselves, and sales for their friends in the supermarket industry.

To take just one example: Earlier this week, NBC’s “storm team” reported that one of its models showed New York City receiving 38 inches of snow this weekend, which would top the previous record snowfall by nearly 50 percent. 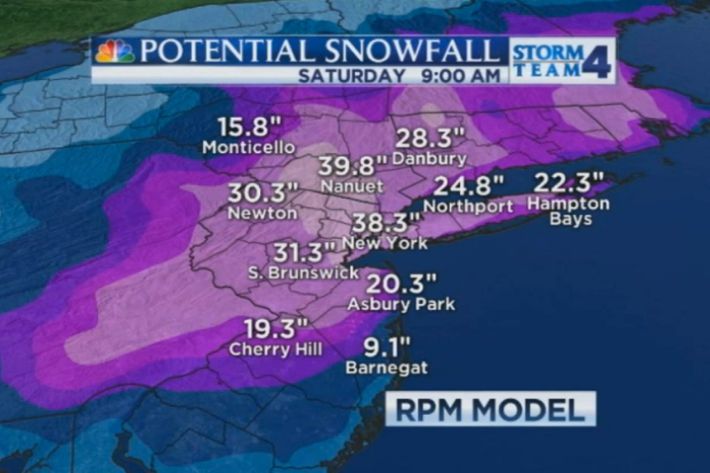 It wasn’t a lie, but this particular model was way out of step with what other models were showing, and airing such a forecast, particularly so far out from the actual storm, only served to alarm the public unnecessarily. But bad weather means better ratings. General news websites, including yours truly — we are part of the problem — also saw a nice traffic boost after picking up the model’s unhelpful, fear-inducing prediction.

Other weather outlets have also done their part to scare the crap out of everybody. Anyone clicking over to Weather Channel’s website yesterday was warned, in all caps, that YOU MUST PREPARE NOW. 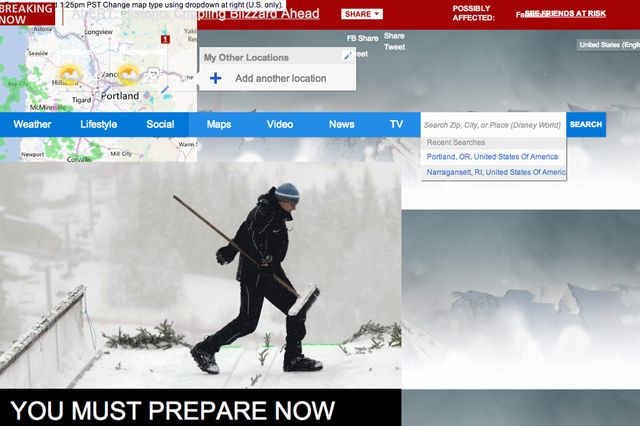 You may have also heard that the current storm is known as “Nemo.” Well, it’s not, at least officially. The National Weather Service doesn’t name winter storms. But last year the Weather Channel decided to start doing it on its own, and that’s where Nemo comes from. As the Times reports today, the naming exercise is “widely viewed as a marketing ploy” — it does wonders for the website’s SEO, for example — but even “some skeptics admit that the names help raise awareness about storms.” And raising awareness only leads to more ratings, more clicks, and, of course, more panic-shopping.

The supermarkets aren’t just the lucky benefactors of storm splurging. They, like the weather outlets, actively take part in hyping up the nasty weather.

Stock up for storm #nemo @fairwaymarket today! We've got you covered with all the basics!

Gear up @fairwaymarket for Winter Storm #Nemo! @audreypuente can you give us more details on #Nemo?

Does everyone actually need this food? Of course not. It’s just snow. It gets plowed and shoveled pretty quickly. Nobody is going to be trapped inside their homes until spring. If you have a day’s worth of food in your apartment already, which most normal people do, you don’t need to spend two hours picking up groceries at Trader Joe’s. But when you’re being told to PREPARE NOW for a potential 38-inch snowstorm with a name, you don’t want to take any chances.

By all means, take whatever sensible precautions are necessary to stay safe and sane during the storm. Bring your pets inside. Grab some booze in lieu of going out Friday night. But don’t freak out. Despite what the meteorological-supermarket complex would have you believe, you don’t need to freak out. You need to relax and maybe build some snow penises.

THE FEED
3:32 p.m.
explainer
explainer
What to Know About the Cuomo Investigations and Possible Impeachment
By Chas Danner
Though he’s the subject of multiple investigations, Governor Cuomo said he’s not resigning and insists, “I did nothing wrong, period.”
2:42 p.m.
crime
crime
What Happens Next After the Derek Chauvin Verdict
By Nia Prater
A judge ruled that there were several aggravating factors in the murder of George Floyd, which could mean a longer sentence for Derek Chauvin.
1:00 p.m.
explainer
explainer
What We Know About the Colonial Pipeline Shutdown
By Paola Rosa-Aquino and Chas Danner
The pipeline is now flowing as of 5 p.m. on Wednesday, though the company says it will take several days for supply to return to normal.

12:50 p.m.
politics
politics
Marjorie Taylor Greene Hassled AOC Inside the Capitol
By Nia Prater
Greene followed Ocasio-Cortez out of the House chamber, accusing her of sympathizing with terrorists. A day later, AOC called her “deeply unwell.”
12:26 p.m.
politics
politics
House Reaches Agreement on Capitol Riot Commission
By Nia Prater
The bipartisan body will release a report on its findings by the end of the year.
10:53 a.m.
politics
politics
Millennial MAGA Moderate Replaces Liz Cheney
By Ben Jacobs
Elise Stefanik is no archconservative, but her loyalty to Trump was rewarded with a spot in GOP leadership.
9:38 a.m.
intelligencer chats
intelligencer chats
The Future of COVID in America
By Benjamin Hart and David Wallace-Wells
Vaccination rates may determine whether the virus becomes a seasonal nuisance sooner rather than later.
9:08 a.m.