Dave and Mike had a problem: The bros (in every sense of the word) have been told that they must bring dates to their cousin’s upcoming wedding in order to prevent them from “harassing” the bride’s friends all night, but both guys are single, and neither of them wants to ask one of the “fringe women” in their lives and “face the inevitable ‘does this mean he wants to take it to the next level’” questions afterwards. Their solution: bring “complete strangers” whom they find through Craigslist.

“We’re born and bred Craigslisters,” the brothers told Daily Intelligencer in an e-mail today. “We threw [the post] together in 5 minutes, just had to dig through to archives to find that pic of us when we were centaurs. Man, those were the days.”

From what Dave and Mike tell us, they’re going to have a lot of women to pick from. Their ad has steadily gained attention online since being picked up by Reddit yesterday, thanks to its ridiculous aforementioned photos and off-color humor. (Outlining their ideal women, the brothers write, “You should be attractive or our aunts will judge you, but not TOO attractive or one of our uncles might grope you.” They answer one anticipated FAQ — “This feels kinda creepy, are you guys Craigslist killers?” — with “No. Well, if you want to be techni.. nevermind. No, we aren’t.”)

It worked. The Bros, who are originally from Albany but now live in New York and D.C.(although we’re not sure which one is where), tell us, “Our Gmail is getting abused.” And things are just getting started. “We’re approaching 500 responses and counting,” they tell us. “Now that the Huffington Post tweeted it that number seems to just be picking up. Love is in the air, Dan.”

Asked how their family is going to react to the stunt, one brother told us, “Out of boredom I tried to convince my dad at Christmas that I’d gone gay now because the lifestyle just suits me better. He was very confused and extremely unamused. I’d imagine he’ll have the same response to this once we just keep repeating, ‘We’ve gone viral, pop.’”

The full ad is below: 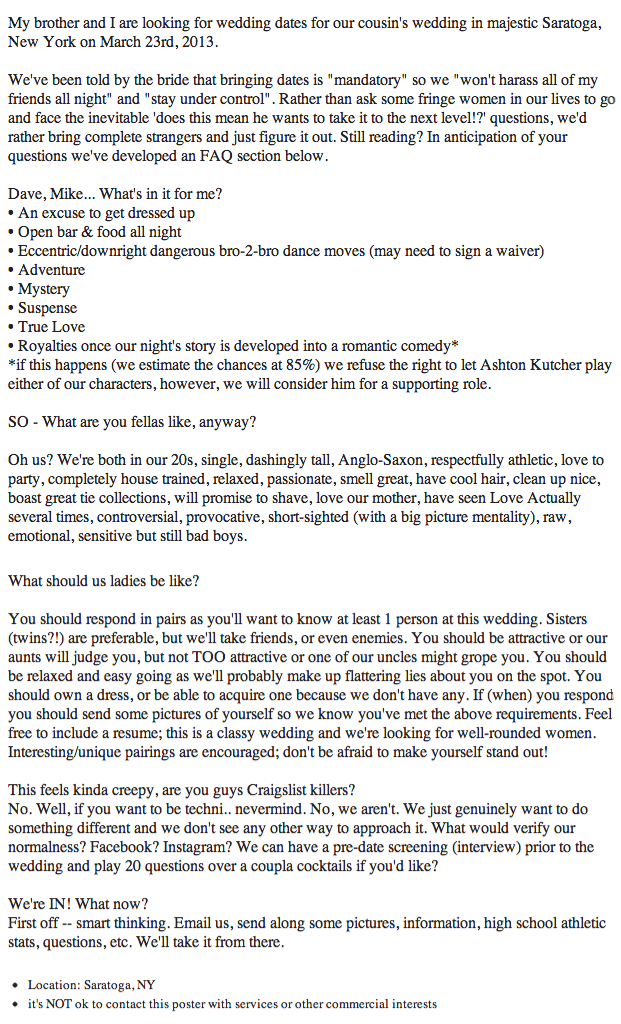