Almost immediately after President Obama casually mentioned to The New Republic that “up at Camp David, we do skeet shooting all the time,” the Skeeter movement was born. (After all, if Obama really did murder clay pigeons regularly, then he wouldn’t refer to it as “do[ing] skeet shooting,” now would he?) Yesterday, the White House attempted to back up the president’s tenuous skeet-cred by releasing the above photo of him shooting flying targets at Camp David on August 4. However, the Skeeters are unconvinced and have since posted a number of captions and Photoshops to Twitter expressing their doubt. And let’s not forget all the credible technical explanations and daft conspiracy theories they’re peddling for why President Obama couldn’t possibly be skeet shooting (or “trapshooting,” whatever that is.)

There’s Already Been One Photoshopped Photo, So Why Not Another? 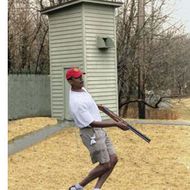 Earlier this week, The New Republic tweeted a photo of “Obama shooting skeet at Camp David,” linking to the whitehouse.gov1.info site they’d gotten it from — except that’s not the real White House site. Once the magazine realized the grainy image was a fake, it deleted the tweet. But the damage was done. “At least this one is a little better photoshop or staged picture than the previous [New Republic] one,” writes conservative blogger @littlebytesnews.

The Angle’s Not Quite Right

“Now, what’s wrong with the president’s picture? First the weapon is nearly level to the ground. Can’t be skeet shooting, nor likely trap either.” — Michael Harlin, writing for The American Thinker.

“That looks pretty pathetic. That’s not skeet shooting. In skeet shooting, you’re either shooting high or you’re shooting low! This is nothing but pandering to the sportsmen and hunters.” — Rick Davenport, of the Erie County Sportsmen’s Federation, speaking to the New York Post.

“The Obama skeet shooting photo looks odd to me because the clays come high or low, not straight.” — Emily Miller, Senior Editor of The Washington Times Opinion pages, writing on her Facebook page.

“He’s shooting straight ahead, which means that there’s either a barn door somewhere in need of some patching, or Obama is such an awesome skeet shooter, he hits them as they come out of the firing device. I keed, I keed. There are legitimate reasons that would explain the angle of his gun, but….” — John Nolte on Breitbart’s Big Journalism blog.

“I suppose it could happen, but in my fifty years of shooting a shotgun, skeet, trap, and hunting, including double barrel muzzle loading black powder shotguns, I have never once seen a smoke pattern like that. Smoke going straight out the barrel is normal, but what the heck is that second smoke stream shooting behind and away from the barrel?” — Michael Harlin, writing for The American Thinker.

“It is evident that the President has never shot a shotgun before as his stance is leaning slightly backward. Look at the position of his torso to his legs. Skeet or trap shooters never do this. They lean slightly forward like a boxer in the ring.” — Michael Harlin, writing for The American Thinker.

Where Did Obama’s Mysterious Belly Flab Come From?

“What a joke, this is a little better photoshop then the first one (see above), but it sill looks odd to me. The arms don’t look right and I don’t recall Obama having a little potbelly??” — Conservative blogger @littlebytesnews.

The Date Doesn’t Add Up

Conservative filmmaker and blogger Pat Dollard points out that August 4 was the president’s 51st birthday and that, according to Reuters, he started the day off playing golf (per Yahoo News) before flying on Marine One to Camp David where he spent a “quiet evening off the campaign trail.” No mention of skeet shooting, Dollard notes. And then there are the photos attached to both stories (see below), which show Obama in different outfits from the one he’s wearing in the purported skeet shooting photo.

A Combination of All of This Stuff

“Weapon too high on shoulder. Aim too low for skeet. No barrel rise or recoil that would result in camera blur, even in video.” — The verdict from Push Back Now, a far-right blog that urged its readers to “volunteer, reduce debt, arm Americans, dump unions, work hard, vote out RINOs.”

“It’s just like a politician really — they can’t shoot the backside of a barn, but they’re pretty good at shooting off their mouth. … Two final thoughts: Those are some mighty low-flying skeet and, you know, I sorta figured the smoke would be blowing from another direction.” — Fox News Radio host Todd Starnes, who’s heard from sources that President Obama actually rarely goes skeet shooting “and the one time that he did he looked ‘awkward and uncomfortable.’”

The man who launched this whole fun game of “Who Can Spot the Fake?”, former Obama adviser David Plouffe, has already taken credit for this glorious outpouring of skeet shooting conspiracy theories.

Day made. The skeet birthers are out in full force in response to POTUS pic. Makes for most excellent, delusional reading. #whereistrump

This post has been updated to include David Plouffe’s reaction.