Nemo, eh? What an odd name for a storm. How in the world did whoever names these things arrive such a choice? Well, as Brian Stelter explains in the New York Times, the Weather Channel invented the name, “much to the chagrin of the National Weather Service, which has advised its forecasters not to follow the channel’s lead.” Plenty of broadcasters are happy to use it, though. The channel decided to start naming winter storms this season, in the absence of the National Weather Service doing so, in order to “better communicate the threat and the timing of the significant impacts that accompany these events,” Tom Niziol writes. The alphabetical list of names looks quite serious at first, drawn mostly from mythology and classic literature. But read through it and you’ll realize that many of the names are also famous from cartoons and movies, and just begging for newscastbanter and cutesy headlines. This can’t be an accident.

Nemo is defined as “a Greek boy’s name meaning ‘from the valley,’” which “means ‘nobody’ in Latin.” But come on, we all know it’s a cartoon fish. Luckily, one of the most buzz-worthy storms of the season also has a cute name — but it was no fluke. The Weather Channel stacked the deck with some easy pop-culture references.

Draco: “The first legislator of Athens in Ancient Greece.”

Really though: Obviously, this is a reference to Draco Malfoy, the notoriously conniving bad guy and bully in the Harry Potter series. He’s a major character in one of the most successful book and movie series of our time. But yeah, first legislator in Ancient Greece, too.

Gandolf: “A character in a 1896 fantasy novel in a pseudo-medieval countryside.”

Really though: A character in a MUCH more well-known novel called Lord of the Rings, by J.R.R. Tolkien, which also gave rise to one of the most successful film series of our time. Note the spelling difference: Gandolf (with an “o”) is a character in William Morris’ The Well at the World’s End, a fantasy series that Wikipedia points out “is known to have deeply influenced Tolkien,” but few have heard of it since. Gandalf (with an “a”) is the wizard in Lord of the Rings and The Hobbit, which, well, we don’t have to tell you. But okay, change one letter and go with the super-obscure reference, sure.

Khan: “Mongolian conqueror and emperor of the Mongol empire.”

Really though: Two far more contemporary Khans sprang to mind before we got schooled in our Mongolian history. There’s Shere Khan, the boss tiger from Rudyard Kipling’s The Jungle Book, which admittedly came bubbling up first thanks to repeated childhood viewings of Disney’s Jungle Book movie. Then of course there’s Khan Noonien Sing, a bad guy from Star Trek — remember Wrath of Khan? This clip would have been inescapable.

Really though: Obviously it’s this guy from He-Man. 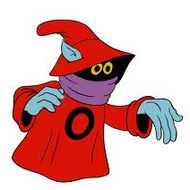 Really though: Actually, yeah, the Q train kind of is what it is. But you would be hard pressed to have those outside New York, or even those who don’t travel by Q train much, suggest that as their first reference. More likely it would be Q, the dry-witted head of gadgets from the James Bond books and movies or Q, the omnipotent mischief maker from Star Trek. Either way, if we’re departing from classical references on this one — couldn’t we get a full name? Was Quincy too evocative of late 1970s television?

Rocky: “A single mountain in the Rockies.”

Really though: This is just silly. We can’t just have one straight-up movie reference? Whatever. Every weather news team in the world will be screaming “Adriaaann” at the top of their lungs when this storm hits, no matter what the Weather Channel says. But of course, that was probably the point all along.

THE FEED
3:32 p.m.
explainer
explainer
What to Know About the Cuomo Investigations and Possible Impeachment
By Chas Danner
Though he’s the subject of multiple investigations, Governor Cuomo said he’s not resigning and insists, “I did nothing wrong, period.”
2:42 p.m.
crime
crime
What Happens Next After the Derek Chauvin Verdict
By Nia Prater
A judge ruled that there were several aggravating factors in the murder of George Floyd, which could mean a longer sentence for Derek Chauvin.
1:00 p.m.
explainer
explainer
What We Know About the Colonial Pipeline Shutdown
By Paola Rosa-Aquino and Chas Danner
The pipeline is now flowing as of 5 p.m. on Wednesday, though the company says it will take several days for supply to return to normal.

12:50 p.m.
politics
politics
Marjorie Taylor Greene Hassled AOC Inside the Capitol
By Nia Prater
Greene followed Ocasio-Cortez out of the House chamber, accusing her of sympathizing with terrorists. A day later, AOC called her “deeply unwell.”
12:26 p.m.
politics
politics
House Reaches Agreement on Capitol Riot Commission
By Nia Prater
The bipartisan body will release a report on its findings by the end of the year.
10:53 a.m.
politics
politics
Millennial MAGA Moderate Replaces Liz Cheney
By Ben Jacobs
Elise Stefanik is no archconservative, but her loyalty to Trump was rewarded with a spot in GOP leadership.
9:38 a.m.
intelligencer chats
intelligencer chats
The Future of COVID in America
By Benjamin Hart and David Wallace-Wells
Vaccination rates may determine whether the virus becomes a seasonal nuisance sooner rather than later.
9:08 a.m.