Didn’t have time to watch the State of the Union tonight? We don’t blame you, really. It was an hour long — and a large percentage of that was just clapping — and really doesn’t make a lick of a difference in the scheme of things. That said, here are some of the highlights.

Word Most Likely to Be Googled: Majorette (“She was a majorette,” Obama said of a teenage victim of gun violence.)

Other Popular Words (just look at this word cloud): 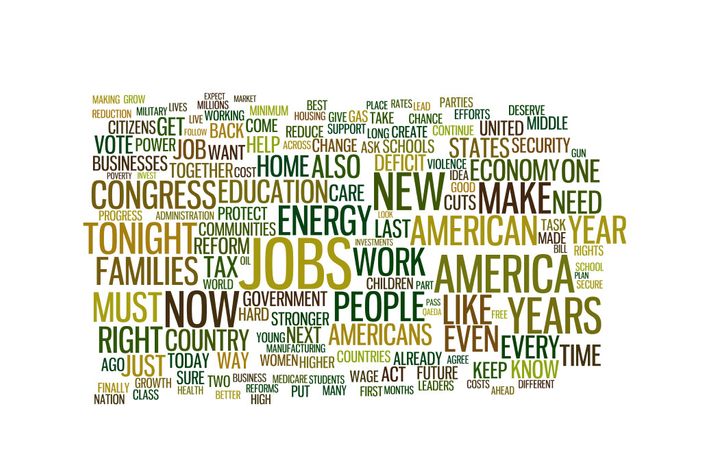 Most Dubious Assertion: “Nothing I’m proposing tonight should increase our deficit by a single dime.”

Most Toothless Tough Talk: “Provocations of the sort we saw last night will only isolate [North Korea] further, as we stand by our allies, strengthen our own missile defense, and lead the world in taking firm action in response to these threats.”

Worst (Okay, Only) Joke: “And I know that you want these job-creating projects in your districts.  I’ve seen you all at the ribbon-cuttings.” (We swear this was a joke.)

Most Emotional Moment: People crying as Obama calls for a vote on gun-control proposals.

Biggest Understatement: “The American people don’t expect government to solve every problem. They don’t expect those of us in this chamber to agree on every issue.”

Saddest Thing That Actually Needed to Be Said: “The greatest nation on Earth cannot keep conducting its business by drifting from one manufactured crisis to the next.”

Line That Would Be Most Out of Place in a State of the Union Address From the Year 1950: “We know hackers steal people’s identities and infiltrate private e-mail.”

Countries We Are Most Jealous Of:

1. Germany: “Right now, countries like Germany focus on graduating their high school students with the equivalent of a technical degree from one of our community colleges, so that they’re ready for a job.”

2. China: “As long as countries like China keep going all-in on clean energy, so must we.”

Goal With Vaguest Path: “Let’s cut in half the energy wasted by our homes and businesses over the next twenty years.” Okay!

Line With Which the GOP Is Most Likely to Disagree: “We must do more to combat climate change.”

Coolest Fact About Genome Research: “Every dollar we invested to map the human genome returned $140 to our economy.”

THE FEED
5:48 p.m.
new york
new york
Chris Cuomo Was Asking for Info on His Brother’s Accusers
By Matt Stieb
New documents from the attorney general’s office show he was begging to help his big brother and shaking down other journalists.
5:44 p.m.
covid-19
covid-19
What We Do and Don’t Know About the Omicron Variant
By Chas Danner
In an attempt to calm fears over the variant, President Biden said on Monday that Omicron is “a cause for concern — not a cause for panic.”
5:15 p.m.
games
games
Everyone Used to Hate Coach K
By Will Leitch
Why are once widely reviled sports figures so often redeemed in the public eye?

5:12 p.m.
business
business
Amazon Workers Will Get Another Shot at Unionizing
By Sarah Jones
There will be another election at the Bessemer, Alabama, warehouse after the company was accused of breaking the law.
4:37 p.m.
crime
crime
Everything to Know About Jussie Smollett’s Trial
By Bindu Bansinath and Amanda Arnold
The actor was accused of staging his own hate crime attack in 2019. Things only got more complicated from there.
4:15 p.m.
the national interest
the national interest
Lauren Boebert’s Bigoted Attack on Ilhan Omar
By Jonathan Chait
Smearing Muslims for fun and profit.
4:05 p.m.
explainer
explainer
What Is Congress Even Doing Right Now? A Brief Guide.
By Ed Kilgore
Congress is tangled in interlocking bills and delayed crises. Here’s the real status and deadline on reconciliation, the debt ceiling, and the rest.
4:00 p.m.
politics
politics
Trump’s 2024 Veepstakes Is Already Under Way
By Ed Kilgore
The former president will probably choose someone unlikely to burnish his own self-image of indispensability as his next running mate.
1:44 p.m.
the national interest
the national interest
Republicans Are Undermining the Vaccine and Blaming Biden for It
By Jonathan Chait
“Why do so many right-wing people distrust the vaccine?” conservatives wonder. It is a mystery.
12:45 p.m.
politics
politics
A Long Island Centrist Jumps Into the Governor’s Race
By Nia Prater
Representative Tom Suozzi will retire from Congress and take a shot at Albany.
12:44 p.m.
silicon valley
silicon valley
At Twitter, @jack Is Out As CEO and @paraga Is In
By Kevin T. Dugan
Jack Dorsey is now leading only one large Silicon Valley company.
10:11 a.m.
politics
politics
Matthew McConaughey’s Next Role Won’t Be Texas Governor
By Benjamin Hart
The actor announced that he will not be running for governor of his home state after all.
7:08 a.m.
red meat
red meat
Welcome to the Beach Cafe, the Upper East Side’s Republican Cheers
By Shawn McCreesh
Ann Coulter, Cindy Adams, and Donald Jr. hang out there; try the (Roger) Stone Burger.
11/28/2021
vulture quiz
vulture quiz
Who Said It: Matthew McConaughey, Kang, or Kodos?
By Bethy Squires
Take our quiz to test your knowledge!
11/28/2021
court appearances
court appearances
The Ghislaine Maxwell Trial, Explained
By Choire Sicha
The close Jeffrey Epstein associate faces sex-trafficking and conspiracy charges. Who is she?
11/27/2021
politics
politics
The New Anti-Feminism
By Sarah Jones
Conservatives used to argue it was bad for men and women. Now they have dispensed with the pretense of caring about women.
11/26/2021
first person
first person
Frank Rich on His Friendship With Stephen Sondheim
By Frank Rich
A lifetime making sense of the extraordinary songwriter — as young fan; critic and “enemy”; and, by now, old friend.
11/26/2021
2022 midterms
2022 midterms
Republicans Can’t Bet on Finding Perfectly Trumpy Candidates
By Ed Kilgore
The GOP thinks candidates who embrace Trump without going full MAGA are the key to winning the midterms. Good luck finding them.
11/26/2021
politics
politics
Merrick Garland Gets Political, Whether He Likes It or Not
By Ankush Khardori
Hated by the right and distrusted by the left, the attorney general is in a perilous position of his own making.
11/25/2021
past is prologue
past is prologue
Cheer Up, Democrats! You’ve Had It Worse Than This.
By Ed Kilgore
The Democratic Party has a lot of problems, but it’s faced similarly sticky situations before and survived.
11/24/2021
politics
politics
For Pete’s Sake, Stop the Presidential Buzz About Buttigieg
By Ed Kilgore
The secretary of Transportation has plenty of fish to fry without constant speculation that antagonizes Kamala Harris supporters to no good end.
11/24/2021
election 2022
election 2022
How Is Paperboy Love Prince Possibly Running for Congress in 11 Districts?
By Valeria Ricciulli
The former mayoral candidate can run, but getting on the ballot on all the districts may be a challenge.
11/24/2021
ahmaud arbery
ahmaud arbery
The Legal Uses of Blackness
By Zak Cheney-Rice
Why attorneys in the Ahmaud Arbery case did — and didn’t— invoke his race.
11/24/2021
black lives matter
black lives matter
Jury Convicts All Three Men Accused of Murdering Ahmaud Arbery
By Justin Miller
Three white men chased a Black man through their neighborhood and killed him, in what has been likened to a modern-day lynching.
11/24/2021
wirecutter
wirecutter
Here’s the Best Strike for Most People
By Choire Sicha
The Wirecutter stops typing.