Tennessee House Democrat Steve Cohen, like the rest of Congress, was forced to sit through President Obama’s hour-long speech last night, clapping all the while, but like a college kid in lecture, he may have been peeking at his phone. At 9:22 p.m., less than midway through the address, the account @victoria_brink tweeted, “@RepCohen just saw you on tv!” complete with some emoji. Cohen “favorited” the tweet. And according to Politwoops, which archives the deleted messages of politicians, he responded — and then thought better of it.

“@victoria_brinkpleased u r watching .ilu” [sic] Cohen wrote from his BlackBerry, and then deleted three minutes later. He followed up a few hours later with, “@victoria_brink nice to know you were watchin SOTU(state of the union).Happy Valentines beautiful girl. ilu,” but deleted that, too.

Brink is a 24-year-old model and attended Texas State University, based on her College Dozen profile. She and the congressman have interacted on their public Twitter accounts since February of 2012, when Cohen favorited Brink’s first tweet. (Cute!) Their other public interactions are actually pretty adorable also, if a bit TMI (h/t Gizmodo reporter Sam Biddle): 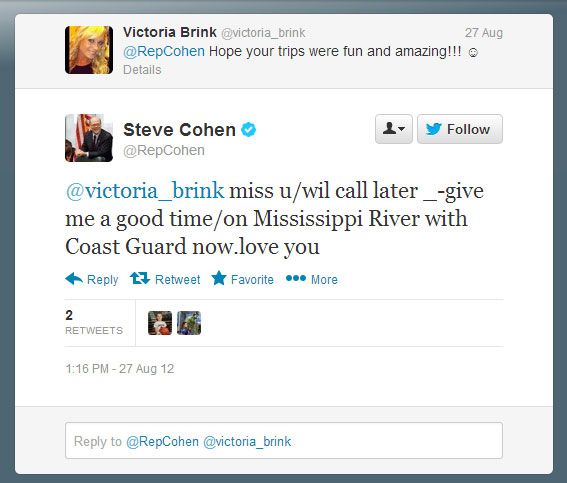 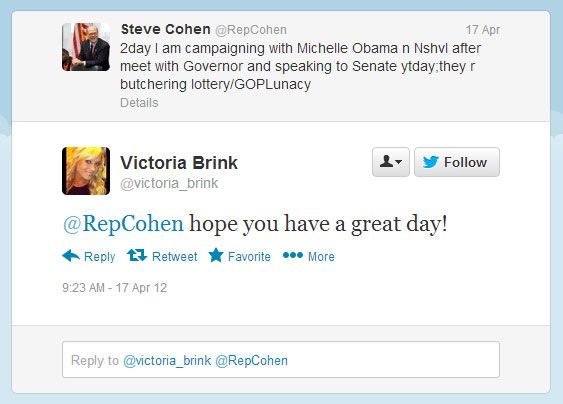 According to a 2007 article from the Hill, Cohen has never been married, but has “had many girlfriends in Tennessee over the years.” (He had one — not Brink — at the 2008 Democratic National Convention.) “Having been out there so long, I used to be on the most eligible bachelors list,” said the 63-year-old as a freshman congressman. “I don’t think you get promoted to the emeritus level. I think you become ineligible.”

We’ve reached out to Cohen’s office to ask about his relationship with Brink and why last night’s online sweet nothings were deleted, but we’ve yet to hear back.

Cohen, for the record, liked Obama’s speech, even if he let his attention stray for a moment: He “told the president he pulled a Michael Jordan … Points, rebounds, assists and steals. He did it all.”

Update: Reached by phone, Cohen’s communications director Michael Pagan told Daily Intelligencer that the tweets were meant to be “private” direct messages. “She is the daughter of a longtime friend and they’re pretty much like family,” said Pagan, who insisted the relationship is not romantic. “He’s known her pretty much her whole life. He has a longtime girlfriend in Memphis.”

Asked if “Happy Valentines beautiful girl. ilu” was an odd private message for a much younger family friend, Pagan said, “I don’t think so. Not in my personal opinion.”

Update II: In a twist more soap opera than we could have even imagined, Luke Russert reports that Brink is actually Cohen’s daughter. Despite Pagan telling us that Cohen had known her “pretty much her whole life,” Russert says Cohen “only learned of her 3 yrs ago.” Wow.

Cohen shows me picture of him and his daughter Victoria at White House Christmas party twitter.com/LukeRussert/st…

THE FEED
12 mins ago
dogecoin
dogecoin
Dogecoin Survives Musk’s SNL Jokes, Will Fund Moon Mission
By Chas Danner
It’s been another whacky 48 hours for the internet’s favorite meme/joke crypto which is not supposed to be worth anything but somehow is.
10:15 a.m.
foreign interests
foreign interests
The U.S. Is Playing Catch-Up at Vaccine Diplomacy
By Jonah Shepp
America can still make a major difference in the efforts to get COVID-19 vaccines into arms globally, but Russia and China have a big head start.
1:28 a.m.
death from above
death from above
Congratulations, You Weren’t Crushed by Space Debris Today
By Chas Danner
That enormous Chinese space rocket has finished its uncontrolled fall back to earth.

5/8/2021
rip
rip
The Obama Family’s First Dog, Bo, Has Died
By Chas Danner
The Obamas’ beloved Portuguese water dog, who became a White House celebrity in his own right, was 12.
5/8/2021
the national interest
the national interest
Elizabeth Warren’s Book Shows She Has No Idea Why Her Campaign Failed
By Jonathan Chait
Persist is an account of a campaign bubble that doesn’t know it was in a bubble.
5/8/2021
political animals
political animals
How the White House Polices Language in Washington
By Olivia Nuzzi
Including the president’s.
5/7/2021
covid-19
covid-19
Have Over 343,000 More Americans Died From COVID?
By Chas Danner
A new analysis suggests COVID has killed far more people than the CDC estimates, as well as twice as many globally, but some experts are skeptical.
5/7/2021
covid-19
covid-19
NYC Still Storing COVID-19 Victims in Makeshift Morgues
By Paola Rosa-Aquino
The remains of 750 bodies are being kept in the trailers, which opened in April 2020 as COVID-19 deaths overwhelmed the city.
5/7/2021
the economy
the economy
5 Explanations for April’s Bad Jobs Report
By Eric Levitz
Day cares are shuttered, the pandemic isn’t over, UI benefits are generous, and two other theories for last month’s big miss.
5/7/2021
crime
crime
Federal Grand Jury Indicts Former Officers in George Floyd’s Death
By Nia Prater
Derek Chauvin and three other former Minneapolis police officers have been indicted on charges of violating George Floyd’s civil rights.
5/7/2021
don't panic
don't panic
Hopefully You Won’t Be Crushed by Space Debris This Weekend
By Mia Mercado
Experts don’t know exactly where a 23-ton Chinese rocket part will land.
5/7/2021

The American jobs engine slowed markedly last month, confounding rosy forecasts of the pace of the recovery and sharpening debates over how best to revive a labor market that was severely weakened by the coronavirus pandemic.

… Economists had forecast an addition of about a million jobs. The increase for March was revised down to 770,000 from 916,000.

Full approval would allow the companies to market the vaccine directly to customers, and may make it easier for employers and schools to require vaccinations

Pfizer and the German company BioNTech have become the first companies to apply to the U.S. Food and Drug Administration for full approval of their Covid-19 vaccine for use in people 16 and older. The vaccine is currently being administered to adults in America under an emergency use authorization granted in December.

The approval process is likely to take months.

The companies said in a statement on Friday that had submitted their clinical data, which includes six months of information on the vaccine’s safety and efficacy, to the F.D.A. They plan to submit additional material, including information about the manufacturing of the vaccine, in the coming weeks.

Pfizer and BioNTech apply for full U.S. approval for their Covid vaccine.
—New York Times
5/6/2021
politics
politics
Tish James Wants In on Jacob Wohl Election Robocall Suit
By Nia Prater
New York’s AG moved to join a federal suit over Jacob Wohl and Jack Burkman’s alleged voter-suppression plot, seeking fines of $2.75 million.
5/6/2021
the national interest
the national interest
When Trump’s Next Coup Happens, the Republican Party Will Fully Support It
By Jonathan Chait
The Cheney debate shows the party elite has made up its mind.
5/6/2021
nyc mayoral race
nyc mayoral race
All the Endorsements in the NYC Mayoral Race
By Nia Prater
With the June 22 primary approaching, Democratic mayoral candidates are racking up endorsements from politicians, organizations, and celebrities.
5/6/2021
the sports section
the sports section
Uh-oh, Jim Dolan Found a New Team to Meddle With
By Joe DeLessio
The widely reviled Knicks owner had mostly left his hockey club alone. Not anymore.
5/6/2021
politics
politics
DeSantis Signs Voting Restrictions Into Law in Fox News ‘Exclusive’
By Nia Prater
The Florida governor turned the enactment of yet another restrictive Republican voting measure into a segment on Fox & Friends.
5/6/2021
politics
politics
New Survey Finds Republicans More Eager to Get Vaccinated
By Paola Rosa-Aquino
Enthusiasm has plateaued, but there are positive developments in the rush to inoculate the country, according to the Kaiser Family Foundation.
5/6/2021
5/6/2021
intelligencer chats
intelligencer chats
Can Biden’s Low-Key Strategy Work Forever?
By Gabriel Debenedetti and Benjamin Hart
His executive branch has seemed almost invisible at times — a stark contrast to his predecessor’s.
5/6/2021
politics
politics
The Sexist Backlash to Universal Day Care
By Sarah Jones
Women left the workforce. The right wants to keep it that way.
5/6/2021