Tripathi censored this photo of himself.

Shashank Tripathi, better known as @comforablysmug, is notorious for creating more panic during Hurricane Sandy by sending out false Tweets about a complete blackout in Manhattan, flooding inside the New York Stock Exchange, and Con Edison workers trapped in a building. Tripathi was threatened with prosecution, quit his job as campaign manager for Republican congressional candidate Christopher R. Wight, and skulked off Twitter after apologizing on October 31, but BuzzFeed notes that he made a less than triumphant return to the site on Sunday.

His latest missives consist mainly of responses to his admirers, but there are also dispatches on his partying: 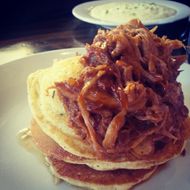 If only we could trust that those are really pulled -pork pancakes.