Right here in America, under our collective nose, there is an industry that survives on political patronage and government subsidies, that regularly receives mysterious and untraceable bailouts funded by taxpayers, that is disproportionately influential in Washington as a result of its massive lobbying efforts, and that is making huge profits at the expense of ordinary consumers.

I’m not talking about Wall Street. I’m talking about the American sugar industry, which for years has been a perfect case study for the corrupting influence of money in politics. These days, beverage-makers like Coca-Cola and PepsiCo are catching flack for working behind the scenes to build opposition to Mayor Bloomberg’s soda ban. But the sugar industry has been exerting its power in politics for decades. And while camping out at a Florida sugarcane farm isn’t as sexy and eye-catching as a Zuccotti Park protest, it’s clear that Big Sugar needs to be kept in check with an Occupy movement of its own.

Today’s Wall Street Journal has a story about the Department of Agriculture’s decision to consider bailing out the U.S. sugar industry by buying 400,000 tons of sugar from major U.S. producers, at a taxpayer-funded cost of roughly $80 million. The massive purchase would “prop up tumbling U.S. sugar prices, which have fallen 18% since the USDA made the nine-month operations-financing loans beginning in October,” according to the Journal.

Why does the U.S. sugar industry need an $80 million bailout, you ask? Because sugar-makers are in danger of defaulting on loans the government gave them as part of a previous bailout program.

The problem, for sugar producers, is that the sugarcane and sugar-beet harvests this year were better than expected, giving them too much supply relative to demand. But instead of celebrating a bountiful harvest, sugar producers are pressuring the USDA to buy their excess sugar from them, which would give them the money they need to pay back a series of loans the USDA gave them last October.

This is the kind of government assistance that makes Goldman Sachs jealous. To put it in financial terms: Imagine if, instead of paying back their loans from the Troubled Asset Relief Program after the 2008 bailouts, Wall Street banks had continued to package toxic credit products and commit mortgage fraud, lost billions of dollars as a result of lawsuits and penalties, and then came to the Treasury Department with hat in hand, saying, “We can’t pay back our first bailout. We need another.”

There would be riots in the streets. And there should be more anger about the machinations of Big Sugar.

I’m generally a supporter of sensible government subsidies. I believe the U.S. government should continue to fund R&D for growing industries like green energy (yes, despite Solyndra) and provide incentives for manufacturing companies to keep jobs here in America. I also think there’s some value in making sure U.S. agriculture can stay competitive with low-cost imports.

But there is simply no rational reason for the too-big-to-fail treatment of American sugar companies. Sugar is not a major American crop: It accounts for less than 2 percent of the value of all U.S. crops; it’s not a major job producer, supporting only 142,000 jobs in the U.S., according to the American Sugar Alliance; and it’s not a major export, ranking only fifth on this 2011 list of the world’s top sugar producers, behind Brazil, India, China, and Thailand. And sugar — unlike, say, green energy — is a known killer, whose harmful health effects collectively cost us billions of dollars a year in health-care spending.

Why does Big Sugar get such preferential treatment, despite being a relatively small industry? Partly because some sugar production, like corn production, is based in swing states like Florida and Michigan, making it a dangerous third-rail for national politicians. And partly because, as this chart from the Heritage Foundation shows, the sugar lobby knows how to put millions of dollars to work on Capitol Hill: 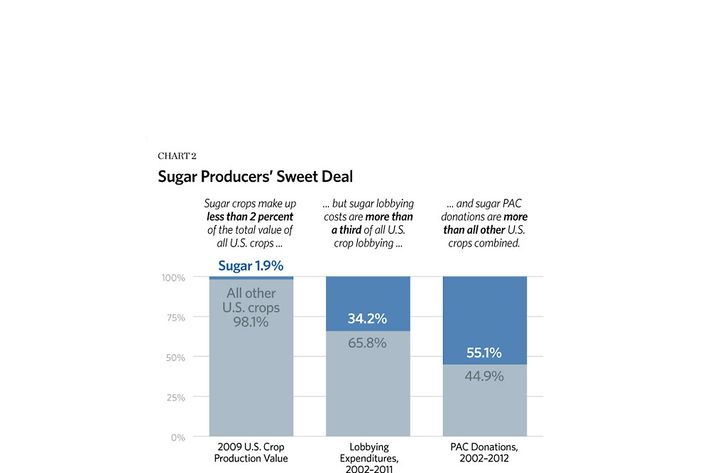 The most egregious example of preferential treatment in the sugar industry is the U.S. sugar program, a sweeping government assistance effort that gives loans to major sugar producers every year, effectively handing them money up front to guarantee a certain price level on that year’s sugar crop. The program (which operates in secrecy, and doesn’t have to name the companies it gives loans to) was supposed to keep prices low for consumers, but it’s had exactly the opposite effect. Independent studies have estimated that the program costs consumers $2.4 billion a year.

The ostensible reason for using government money to prop up Big Sugar is that it keeps prices low for consumers. But that hasn’t happened, either. This chart of refined sugar prices (via Seeking Alpha) shows that the price U.S. consumers pay for sugar is roughly double the global average. 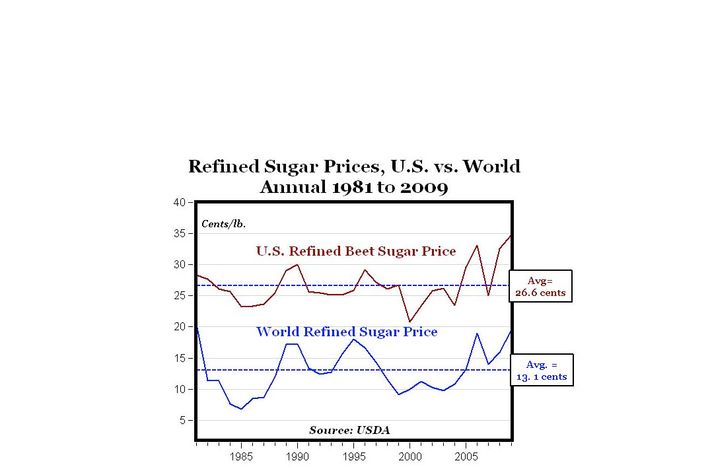 When confronted with numbers like these, Big Sugar likes to point its finger at food manufacturers and blame them for running up costs that are then passed on to consumers. But food manufacturers have competition; Big Sugar doesn’t — which is part of the reason that just one manufacturer, American Crystal Sugar, had net income of more than half a billion dollars last year, according to its annual report. (American Crystal Sugar is also the biggest lobbyist in the industry and spent at least $1.6 million in the 2012 election cycle, according to the Florida Center for Investigative Reporting.)

In conclusion: Big Sugar has spent decades paying its way into politicians’ hearts, demanding price controls and tariffs that boost profits and artificially inflate sugar prices, and using its political clout to establish a permanent life-support mechanism for an industry whose major product is causing many Americans to die.

Why wait? Let’s Occupy Sugar, and Occupy it now.

10:13 a.m.
early and often
early and often
The Devil Went Down to Georgia and Lost
By Ed Kilgore
Trump spent the past two years working to exile Brian Kemp and Brad Raffensperger from the GOP, but he couldn’t do it.
9:00 a.m.
early and often
early and often
President Mike Pence Would Be Worse Than Trump
By Ross Barkan
The former vice-president is attempting to bolster his chances in 2024, but Democrats would be wise to beware any attempt to rehabilitate his image.
8:00 a.m.
foreign affairs
foreign affairs
The American Running Rescue Missions in Ukraine
By Rachel Nostrant
Kathy Stickel has pulled dozens of people out of harm’s way by putting herself in it.
7:00 a.m.
plagued
plagued
Welcome to the Next COVID Wave
By Chas Danner
The new wave fueled by the BA.2.12.1 subvariant might not be as big or bad as the last one, but there are still plenty of ways it can go wrong.
5/24/2022
2022 midterms
2022 midterms
Republicans May Have Sabotaged Their Best Chance to Beat Whitmer
By Matt Stieb
Five GOP candidates for governor in Michigan — including the top two contenders — faked signatures to get their names on the ballot.
5/24/2022
adam neumann
adam neumann
Adam Neumann’s New Business Plan
By Kevin T. Dugan
The former WeWork CEO wants to get rich(er) by helping corporations appear more environmentally sustainable than they really are.
5/24/2022
partygate
partygate
Millionth Boris Johnson Pandemic Party Exposed
By Benjamin Hart
Will this be the one that forces his resignation? Nah, probably not.
5/24/2022
early and often
early and often
Perdue Ends Flailing Campaign With Racist Remarks About Stacey Abrams
By Ed Kilgore
The former senator capped off his Trump-inspired challenge to Governor Brian Kemp by accusing the Democrat of “demeaning her own race.”
5/24/2022
games
games
The Most Disturbing Part of the Yankees’ ‘Jackie’ Incident Was the Fans
By Will Leitch
Yankee Stadium picking up Josh Donaldson’s taunt was another example of crowd dynamics gone haywire.
5/24/2022
vision 2024
vision 2024
Democrats Quietly Search for an Alternative to Biden in 2024
By Gabriel Debenedetti
Inside the 2024 soul-searching that’s happening in every corner of the Democratic Party — except the White House.
5/23/2022
new york
new york
Sean Patrick Maloney Is Getting Primaried After Ticking Off Democrats
By Matt Stieb
Progressive state senator Alessandra Biaggi is expected to challenge Maloney after he ditched his own seat to run in a less competitive district.
5/23/2022
politics
politics
House Ethics Committee Investigates Madison Cawthorn for Promoting Crypto
By Matt Stieb
Cawthorn is leaving in January, but he may be in trouble before then.
5/23/2022
life after roe
life after roe
Nancy Pelosi Communion Ban Is a Challenge to Pope Francis
By Ed Kilgore
The Vatican opposes the weaponization of Communion and stopped bishops from barring President Biden. Will Francis intervene on Pelosi’s behalf?
5/23/2022
just checking in
just checking in
So What Is Rudy Giuliani Up to These Days?
By Margaret Hartmann
Trump’s former attorney has been keeping busy by dealing with January 6–related legal woes, making weird videos, and arguing with parade hecklers.
5/23/2022
plagued
plagued
The COVID Vaccine News Many Parents Have Been Waiting For
By Matt Stieb
Pfizer has finally filed for FDA approval for a three-dose COVID vaccine for kids under the age of 5.
5/23/2022
foreign interests
foreign interests
Biden Says U.S. Will Defend Taiwan Against China — or Maybe Not
By Chas Danner
The president’s comment indicated an aggressive change in policy. The White House quickly walked it back.
5/23/2022
religion
religion
Southern Baptists Hit by Bombshell Report on Sexual Abuse
By Ed Kilgore
The ever more conservative leadership of America’s largest Protestant denomination gets a wake-up call about its own sins.
5/23/2022
the city politic
the city politic
Maybe Bill de Blasio Deserves a Comeback
By Ross Barkan
The former mayor stooping to run for Congress is absurd, but a little less so when considering his record.
5/23/2022
early and often
early and often
The Drama-Lover’s Guide to the New Trump Books
By Margaret Hartmann
Love gossip, but not enough to actually read the new batch of Trump books? Here are all the juicy, disturbing, and darkly amusing tidbits you missed.
5/23/2022
the money game
the money game
Buy Now. Pay (and Pay, and Pay, and Pay) Later.
By Scott Galloway
The bill for the finance hack of the pandemic is coming due — for all of us.
5/22/2022